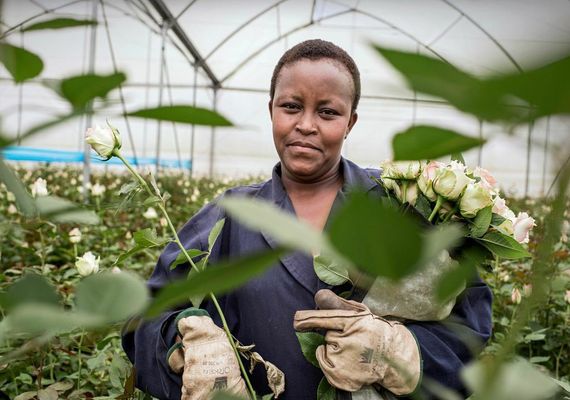 February marks an exceptionally busy time for the flower industry. Yet, as another Valentine's Day passes us by, rarely do we consciously think about where the roses we buy come from and the complex human story that surrounds them. The journey of the rose from Lake Naivasha, Kenya, sparks a wider debate about the impact of water and land scarcity and their direct link to conflict, poverty, ethnic strife and climate change. Water is essential to peace. Therefore, understanding how to manage water in a fair, sustainable and peaceful way will see the return of balance and stability to Lake Naivasha.

This year, to coincide with Valentine's Day, peacebuilding charity International Alert presented the photo exhibition 'Peace blooms: Cattle, conflict and roses of the Lake Naivasha.' It is set against the backdrop of the struggles for economic security, environmental sustainability and traditional life in Kenya. The aim, as Dan Smith, Secretary General of International Alert, states is that "by following the story of the rose and the cattle, we hope people will understand the compound detrimental effects of water shortages and join in a discussion about what can be done".

In the dry Rift Valley of Kenya, Lake Naivasha is a major source of living for the two million rose farmers and Maasai pastoralists that live around the lake. It is also home to 70 percent of the roses that get exported to the UK, providing profitable export business and bringing wealth to Kenya. New horticulture industries have been steadily growing around the lake since the 1980s, and continue to employ thousands of people from across Kenya, mainly women, to harvest the thousands of roses that appear in our shops the next day. 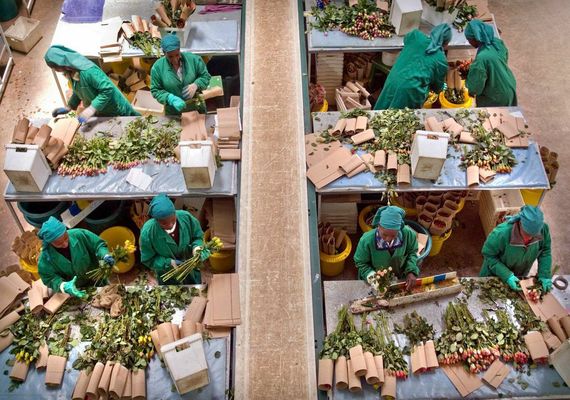 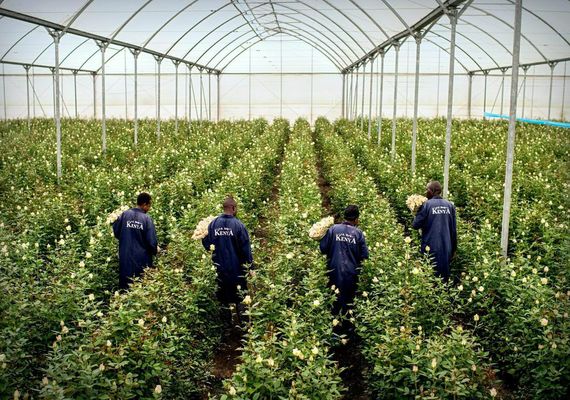 The farms provide wider social security and support for their workers. As part of their corporate social responsibility schemes, many farms provide primary and secondary schooling as well as informal settlements housing the workers. The private sector has opened key development opportunities whilst the flower farms have plugged the gaps in basic services that the government has failed to provide. The picture is not all rosy. Wages are low, workers have long hours and the smaller flower farms are not as likely to adhere to the strict good practices of larger farms. Labour rights have been a source of violent unrest in the area, especially in 2006 when 1,000 workers at one rose farm were fired for complaining about pay and working conditions, promptly leading to riots and crowds being tear gassed by the police. 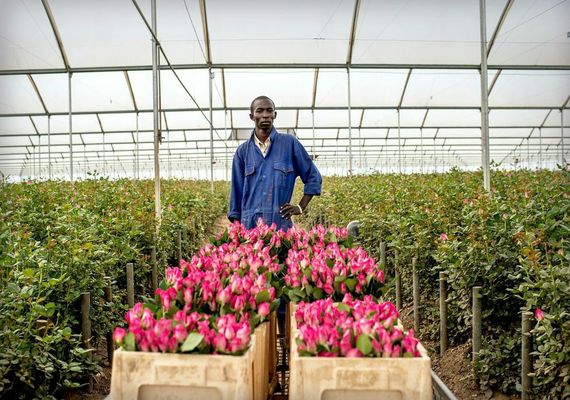 With demand has come rapid change bringing new challenges leading to ever-restricted availability of water and land. The first problem is one of in-migration to Niavasha. The success of the rose farms means people across Kenya, escaping high unemployment, come to Niavasha to find work imagining the "streets of Niavasha paved with gold", according to a member of the Lake Naivasha Water Resources Association. Most of the workers live in the slums around the city. Poor sanitation means human waste and pesticides from the farms have contaminated the lake. 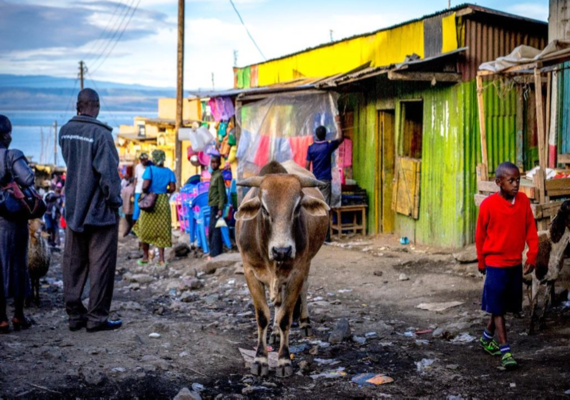 The second problem concerns the impact on the Maasai. The rose farms have impeded on what has traditionally been a water source for Maasai livestock during the dry season. The farms rely on the lake for irrigation, running pipes straight from the lake into the green houses. The result is that water is being drawn faster than it can be replenished leaving drastically low water levels. The Massai, who have long brought their animals to drink from the lake, now have far fewer access to water supplies for their own needs and many animals die from the contaminated water. Additionally, local people with no running water have to queue and pay for the water that is otherwise free to the farmers. A fishing industry around Niavasha that fed the local people has long since disappeared. As one Maasai explained, "if you speak to a pastoralist, he will tell you the development in Naivasha has not been good, as it does not benefit him". 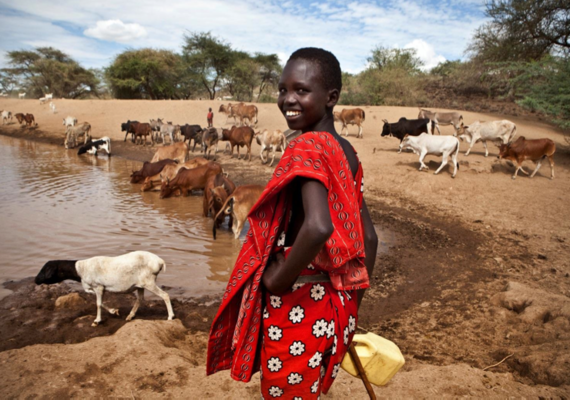 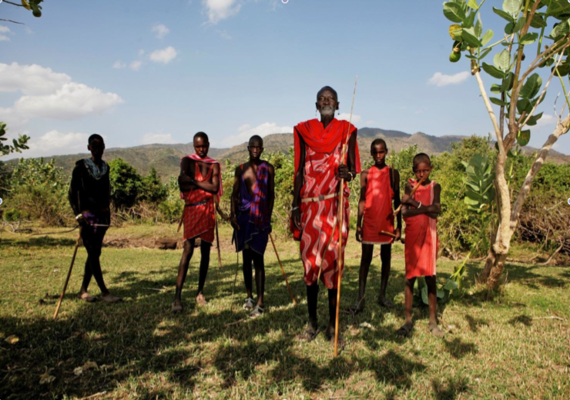 This has led to increasingly violent disturbances over scarce resources essential for their survival and livelihood. By the end of 2014, inter-communal conflicts resulted in 310 deaths, and 220,177 displaced. However, the Rift Valley has been plagued by violence for years. The Rift Valley Province is ethnically diverse, home to Kikuyus, Luos, Luhyas, Kalenjins, and Masaai. Masaai and Kikuyu communities continue to carry out revenge attacks and clash over water, cattle rustling and land encroachment. The post-election violence in 2007 quickly degenerated into wider communal disputes over land, displacing over 600,000 from their homes along the Rift Valley. The drought of 2009 increased already fraught struggles over access to water, with fighting between the pastoralists and flower farms causing several deaths. 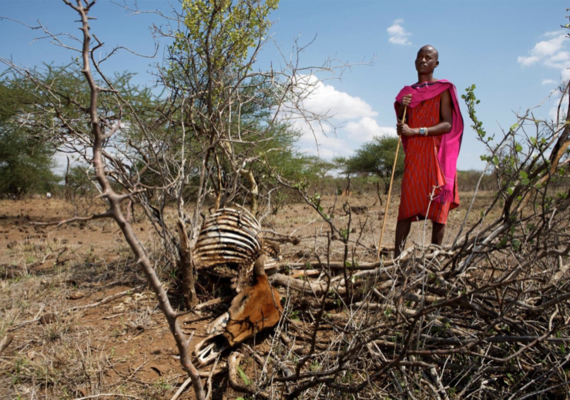 During the violence and unrest in 2007, the farms protected their workers from attacks by opposing tribes by ensuring that each worker was paid in full for the month and given transport to safe areas back to their indigenous homes. Some also provided on site sanctuary to their employees. Yet, since then inter-communal tensions have gone unaddressed. Climate change is another factor; protracted drought, desertification and agricultuaral modernisation has placed even further pressure on pastoral livelihoods. Eruption of violence remains under the surface of daily life. 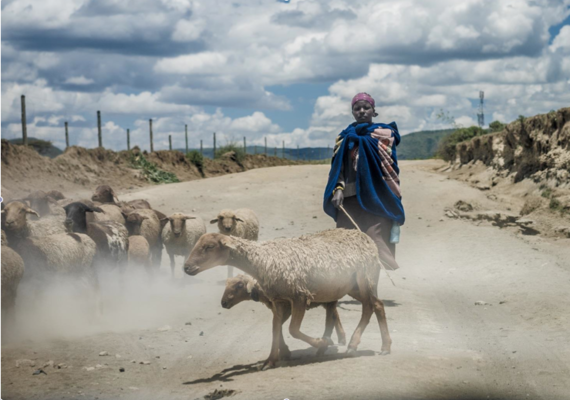 Natural resource management is essential for inclusive and sustainable growth. As Dan Smith asserts "Peace is possible if the people of Naivasha have a say in how natural resources are managed and how decisions are made". Violence over resources is not inevitable. When farms are better planned, water and pesticide runoff managed fairly the benefits from the lake can be reaped for decades to come and more serious gains in poverty alleviation can be achieved. Dialogue is key to ensure fears over the past and present do not entrap Kenya's future prospects for peace.

At International Alert, dialogue clubs in countries around the world bring together groups divided by conflict to find ways to resolve their differences peacefully, enabling them to ensure equal benefits from natural resources and avoid the risk of violent conflict.

By donating £5 this will ensure the continued support for dialogue clubs around the world.

To donate, text ALERT to 70800 or visit intalert.org/donate