NASA reported on Thursday the discovery of Kepler 16b, a planet with two suns that evokes images of Luke Skywalker's home planet, Tatooine, from the "Star Wars" franchise.

The planet, which is 200 light years away and roughly the size of Saturn, is the first circumbinary planet -- meaning that it orbits two suns -- ever discovered, according to NASA.

ILLUSTRATION AND ANIMATIONS BELOW

"This discovery confirms a new class of planetary systems that could harbor life," William Borucki, the principal investigator of the Kepler telescope said in a statement. "Given that most stars in our galaxy are part of a binary system, this means the opportunities for life are much broader than if planets form only around single stars. This milestone discovery confirms a theory that scientists have had for decades but could not prove until now."

Kepler 16b was discovered by the Kepler space vehicle, a satellite telescope that searches for habitable planets. Scientists, however, do not believe that life exists on the planet. The temperatures are about minus 150 degrees Fahrenheit, according to The Wall Street Journal.

The research will be published on Friday in the journal Science.

In a HuffPost blog post published on Thursday, Dr. Laurance Doyle, an astrophysicist at the SETI Institute and the lead author of the paper, referenced Star Wars: "But today science fiction has become science fact, and that galaxy far, far away has become our own galaxy. A whole new kind of planetary system has been shown to exist and -- like Luke in the story -- the adventure is just getting started."

LOOK: An artist's illustration of Kepler 16b: 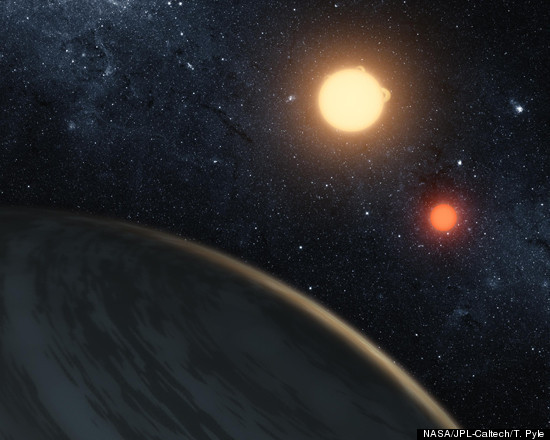 WATCH: A Dance of Two Suns and One Planet: Animation of the orbital pattern of the stars: