Two groups of astronomers working independently in Germany have discovered a massive new exoplanet that's quite strange--for a few reasons.

The newfound exoplanet, dubbed Kepler-432b, was monitored by NASA's Kepler space telescope from 2009 to 2013 and identified as a planetary candidate in 2011. Using the 2.2-meter telescope at Calar Alto Observatory in Andalucía, Spain and the Nordic Optical Telescope on La Palma in the Canary Islands, the researchers are now confirming that, indeed, it's a planet. 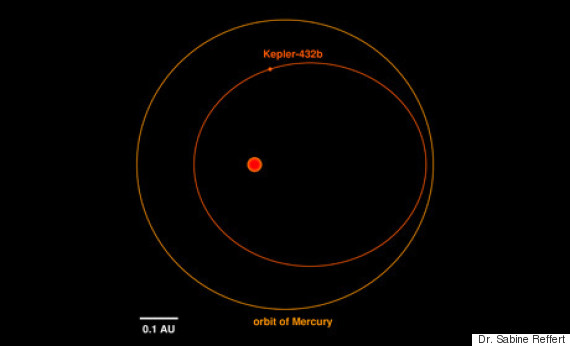 Analyzing the data from both telescopes, the researchers discovered Kepler-432b is incredibly dense; though it's around the same size as Jupiter, its mass is six times that of the gas giant. Its orbit around its host star, a red giant with a radius that's four times that of our Sun, is also unusual.

“The majority of known planets moving around giant stars have large and circular orbits," Dr. Davide Gandolfi, an astronomer at Heidelberg University's Center for Astronomy in Germany and a researcher involved in the discovery, said in a written statement. "With its small and highly elongated orbit, Kepler-432b is a real ‘maverick’ among planets of this type."

And the planet is only one of five observed orbiting a red giant host star at such a close distance. Red giants are stars in their last stage of life. They can grow to become anywhere from 10 to 100 times their original size, and as they grow, any planets nearby are at risk of being devoured.

So though Kepler-432b has been able to survive near its star so far, it likely won't be around for much longer.

“The days of Kepler-432b are numbered,” Mauricio Ortiz, a PhD student at Heidelberg University who led one of the two studies of the planet, said in the statement. “In less than 200 million years, Kepler-432b will be swallowed by its continually expanding host star.”

Two papers describing the discovery have been published in the January 2015 issue of the journal Astronomy and Astrophysics.