John Kerry spoke out against the "swiftboating" of Barack Obama on Tuesday, urging people to confront "disgusting lies" that continue to percolate about the Illinois Senator. "As someone who cares about winning this election and changing the country I love, I know it's not enough to complain about a past we can't change when our challenge is to win the future," said Kerry, in a strongly worded email to three million supporters of his 2004 presidential campaign. "We must stop the Swiftboating, stop the push-polling, stop the front groups, and stop the email chain smears," he continued, alluding to a false and bigoted email that continues to circulate about Obama, as The Nation's Chris Hayes first detailed in October. (The Clinton Campaign removed volunteers who were caught forwarding the email, and Clinton surrogate Bob Kerrey recently apologized to Obama after repeatedly making related remarks that gave the smears more airtime.) Kerry directed his supporters to "stand up for a new kind of politics" by visiting a new feature on Obama's website that enables people to beat back the smears. The request could also help the Obama Campaign harvest tens of thousands of valuable emails from activists and donors involved in the last general election. 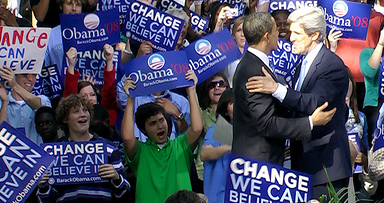 The unusual plea comes amidst a series of dirty attacks against Obama. This week in South Carolina, CNN reported that misleading "push polls" were bashing Obama and promoting Hillary Clinton. Last week, a call was recorded in Nevada that stressed Obama's middle name, Hussein, a tactic that some operatives have used to appeal to bigoted sentiment and falsely suggest that Obama is a Muslim. Obama is a Christian, as his campaign is reminding voters in a YouTube video released on Tuesday.

While the email does not mention any other candidates, it coincides with Obama's new strategy of directly confronting "distortions" by both Clintons. A growing number of Democrats have been speaking out against Bill Clinton's recent remarks, which Obama supporter Sen. Dick Durbin likened to swiftboating, while more reporters are scrutinizing the former President's claims. On Tuesday, ABC News' Jake Tapper reported that Bill Clinton has been "spreading demonstrably false information," while Chicago Tribune columnist Eric Zorn provided a rare conclusion for the political press: "Bill and Hillary Clinton have lied brazenly about Obama's recent statement about Ronald Reagan."

The swiftboating shows no signs of abating, but Obama is betting that many of John Kerry's supporters learned from the mistakes of 2004.