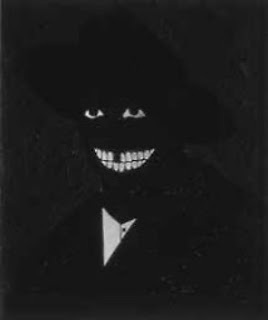 Kerry James Marshall has referenced how Ralph Ellison's "notion of being and not-being, the simultaneity of presence and absence, was exactly what I was trying to get at in my artwork." "A Portrait of the Artist as a Shadow of His Former Self" (l980) looms over the retrospective of Marshall's work currently on exhibit at The Met Breuer. The painting, a cocky black figure with big white teeth that's beyond the stereotype of 50's television caricature (say Amos and Andy or Aunt Jemima) jolts the viewer out of complacency with a piercing stare that's nothing short of a reprimand. "I am invisible, understand, simply because people refuse to see me," is a quote from Ellison himself that's cited later in the show. In "Slow Dance" (1992-3) Marshall carries this idea further in showing his black couple embracing to The Originals' "Baby I'm for Real," a soul title Wittgenstein could also have written. The name of the show is "Mastry" which could refer to the old masters whose works are cited all through the exhibit (as in "Beauty Examined" from l993 which references both Eakins' "The Gross Clinic" and Rembrandt's "The Anatomy Lesson of Dr. Nicolaes Tulp") or Grandmaster Flash. After all his technique is a little like the kind of "sampling" that rappers employ. Marshall wants his cake and eat it too and he could leave himself open to criticism. What's with all these dead white males? "Beauty, School of Culture" (2012) is a mural of a ghetto beauty salon with the Tate poster of the Chris Ofili show on the wall. "De Style" (1993) takes a classic scene from a franchise like Barbershop while tipping its hat to the great group portraits like "The Night Watch." Marshall sometimes seems like a precocious kid who can't stop showing off his knowledge. And he is imaginative in leaving nothing to the imagination. In "Red (If They Come in the Morning)"from 2011 he draws on Barnett Newman's color field painting in his exploration of race. But he's the ultimate post-modernist in his juxtaposition of indigenous and so-called high culture--and the real deal. This is one show you won't want to miss.