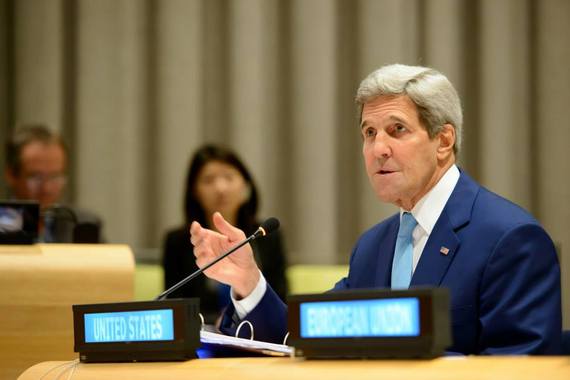 Secretary of State John Kerry says it's time to finish what President Kennedy started in 1963. Today (October 7) is the anniversary of Kennedy signing the Limited Nuclear Test Ban Treaty. It banned nuclear tests in the atmosphere, underwater and outer space.

The treaty was the first major agreement between the U.S. and Russia on controlling nuclear weapons. But it left some unfinished business. Underground blasts were not prohibited. The door has yet to be closed on nuclear testing.

Now Kerry says the U.S. Senate should finally ratify the Comprehensive Nuclear Test Ban Treaty (CTBT). The CTBT would end all nuclear test explosions. Think about that. What a major step that would be for turning the world toward nuclear disarmament. Kerry, in a speech at the United Nations last month, said:

This treaty is about diminishing our reliance on nuclear weapons. It's about reducing dangerous competition among nuclear powers. It's about responsible disarmament, and ultimately it's about advancing international peace and security by building a different structure on which we can all rely.

So what needs to happen for the Senate to pass the treaty? In 1999, they rejected it by a close vote. Some senators have expressed concern over the ability of the CTBT to detect secret nuclear explosions.

The treaty has a monitoring system with stations in countries all over the globe. This international monitoring system is so developed and will only get stronger once the treaty is passed. In addition, the U.S. has its own monitoring capability for detecting nuclear explosions.

The CTBT monitoring system, even though not fully operational, was able to detect North Korea's nuclear test explosions. Trying to hide a nuclear test has long been regarded as an extremely difficult, if not impossible, task for any nation and one with minimal gain.

The other issue is can the United States maintain its nuclear arsenal without test explosions? A program called Stockpile Stewardship seeks to verify the reliability of the nuclear arsenal without going back to test explosions. The United States has been using this method since its last nuclear test in 1992. It features some of the fastest super computers in the world. Dr. Ernest Moniz, the Secretary of Energy, had this to say:

Because of the Stockpile Stewardship Program, the Directors of the Department's National Security Laboratories have been able to certify the diminishing stockpile annually. Our lab directors believe they actually understand more about how nuclear weapons work now than during the period of nuclear testing.

If it's not broke, don't fix it. Stockpile Stewardship is working. So stick with it. Why go back to test explosions and the costs and tensions that would bring to the world? Does anyone really want to relive those Cold War days?

To assure senators concerned about maintaining the nuclear arsenal, investment in Stockpile Stewardship would be a way to go, rather than pouring money into new nuclear tests. The treaty could be ratified in the U.S. Senate with this assurance.

The United States and all nations really have an interest in reducing and ultimately eliminating nuclear weapons. They are expensive armaments which drain resources from society. The more you spend on nuclear weapons the less you can apply to other foreign policy and defense objectives. The dangers of accidents and nuclear terrorism are very real. Global nuclear disarmament is a vital national security goal. Kerry concluded by saying:

It is absolutely one worth fighting for, especially in an age where dirty bombs and nuclear materials and all of these other dangers exist. We would be better off, clearly, emphasizing the passage of the Comprehensive Test-Ban Treaty so that we will never again see additional nuclear powers, and so that the existing nuclear powers will continue to move to eliminate these weapons from Earth.

Along with the United States there are seven other nations that need to ratify the CTBT for it to take effect globally. These nations include China, Egypt, Iran, Israel, India, Pakistan and North Korea. U.S. leadership is clearly needed to get this job done.

The goal of ending nuclear weapons testing is one shared by Democrats and Republicans alike. The treaty that democratic President Kennedy signed in 1963 was built on the foundation set by republican president Dwight Eisenhower. In fact, officials from Ike's administration spoke out in favor of its passage. If the two sides can come together again, we can get this important treaty ending nuclear testing forever.