Music stars Ke$ha and Iggy Pop are teaming up, but not to make some new tunes. The duo have joined with PETA to speak out in protest of Canada's annual harp seal hunt, a clubbing massacre that began this week.

The Canadian Department of Fisheries and Oceans has set this year's quota at 400,000 animals, the highest since 1971. Seals as young as 12 days old can be legally slaughtered in the commercial hunt, which employs firearms and barbaric hakapiks -- a heavy wooden club with a metal hook on the end -- to brutally bludgeon the animals to death. According to PETA, the Canadian government spends $7 million each year defending the controversial hunt.

PETA's campaign features separate posters of both Ke$ha and Iggy Pop (see below) proclaiming "Canada's Club Scene Sucks." Iggy also filmed an interview with PETA (also below) sharing his thoughts on the seal hunt, interspersed with some hard-to-stomach footage of the repulsive killings in action.

"I was lucky enough to get to watch a bunch of wild seals recently and truly fell in love with these amazing creatures," Ke$ha says in a press release provided by PETA. "The Canadian seal slaughter is barbaric and archaic."

Ke$ha and Iggy join a long list of other prominent people who have voiced opposition to the annual slaughter, including Pamela Anderson, Sarah McLachlan and Bryan Adams, among others. Actor Ryan Reynolds expressed his outrage over the seal hunt in a blog two years ago on The Huffington Post.

Celebrities aren't the only opposition Canada's seal hunt is facing this year. According to ENS, this year's seal hunt is off to a slow start as a result of "low demand for seal pelts, poor prices and a European Union ban on seal products." A lack of sea ice due to climate change is also hindering the massive hunt.

Check out the images and video from Ke$ha and Iggy's PETA campaign below, and weigh in with your thoughts in the comments. 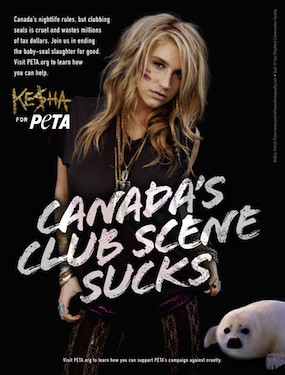 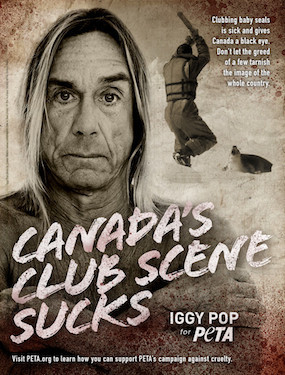