Britney. Christina. Katy. Ke$ha? The sometimes controversial, crude and bedazzled singer gets patriotic on the cover of the new issue of V magazine and dishes about being compared to other female pop stars.

“I do feel like there are the pop stars of the world and then I’m like their dirty little sister, running around with sh*t on my face in combat boots because I can’t walk in heels."

Well, Ke$ha isn't exactly helping her cause. Besides her often unkempt appearance, she recently tweeted a photo of herself urinating in public, which is totally something we'd expect from Britney Spears...five years ago.

As Ke$ha herself sings, "We R Who We R," and she's showing no shame. In fact, it seems Spears is a fan of Ke$ha, telling V, “Ke$ha brings an incredibly carefree, fun-loving spirit to American pop music. I love listening to her songs when I’m on the treadmill. They help me power through my workout.”

Ke$ha also revealed in the cover story that her newfound fame comes at a price.

“When paparazzi showed up at my house, it was really mind-boggling. I’ve found ways to do exactly what I want, but in the privacy of my own sanctuaries.” She still divides her time between houses in L.A. and Tennessee, living in the woods, she says, “away from inquiring eyes.” “I have wild, wild nights there,” she confesses, “but my friends and I are all really private. We get f**king crazy, but you’re not going to see me stumbling out of nightclubs.”

For more from Ke$ha, including details on her new album, musical influences and some star-spangled photos, head over to V magazine, and don't miss the new issue, on newsstands May 10.

Check out photos from Ke$ha's V magazine shoot below: 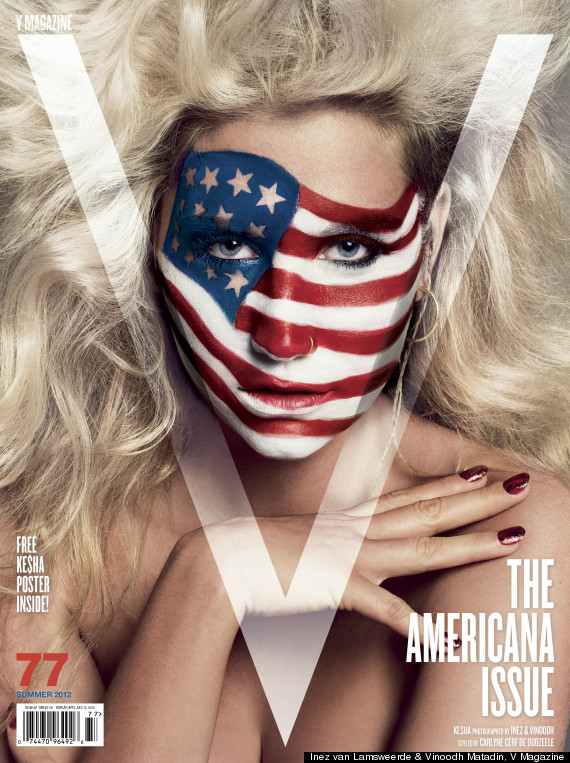