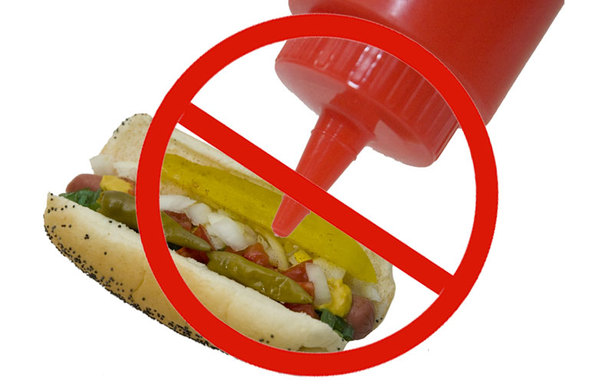 Earlier this week Oscar Mayer and Ball Park found themselves before a judge in Chicago accusing each other of false advertising. One battle in the wiener wars is over Oscar Meyer's claim that their frank is the best.

Apparently ChefsBest in San Francisco tasted hot dog samples and they crowned Oscar Mayer #1 (interestingly, the results are no longer on their website). U.S. Magistrate Judge Morton Denlow grinned and asked "And how would ten chefs in San Francisco know what the best hot dog is when they have never been to Chicago or tasted a Chicago hot dog?" When the Ball Park counsel complained that the chefs were not given the opportunity to squirt ketchup on their dogs, Denlow interrupted, saying "That's an area of great debate."

Chicagoans, renowned for our worship of the all beef frankfurter (full disclosure, please noet the use of the word "our"), understand that ketchup is popular with children because they like sweet stuff, so they don't argue with kids who order it on their franks. But if you are over 18, never, ever, no how, no way, allow ketchup anywhere near a proper hot dog in Chicago. Fogeddaboudit.

Apparently no less an authority than National Hot Dog & Sausage Council, the official trade association based in Washington, DC, agrees. It has codified the rule in their paper on "Hot Dog Etiquette and everyday guidance for eating America's sacred food." There it is in black and white: "Don't use ketchup on your hot dog after the age of 18." In their video they add "We all have to grow up sometime":

In Chicago, if you want ketchup on your dog, they'll point you to the bottles used for garnishing French fries and tell you to "go ruin it yourself."

It is such a Chicago shibboleth that when Bob Schwartz, a VP of Vienna Beef, the leading Chicago wiener supplier, wrote a book, he titled it "Never Put Ketchup On A Hot Dog." He calls ketchup an "affliction."

Another famous Chicagoan, President Barack Obama, made it official with a proclamation on June 3, 2011 while visiting one of the Rudy's Hot Dog stands in Toledo, OH. Obama and the mayor stopped in for a chili dog, but apparently the subject of ketchup came up. "You shouldn't put ketchup on your hot dog," your President said.

So there you have it. Big government once again interfering on our right to chose.

Yes, we know hot dogs are made from animal, that they are made from scrap meats including lips and a*holes, and we know there are nitrites and nitrates in them, and we don't care (actually there is good research that nitrites and nitrates are beneficial, and the risk was overblown). We don't eat hot dogs every day. They are an occasional treat. Omnivores also eat chocolate occasionally, bread, tofu, and even veggies!

If you decide to complain about eating meat here, moderators will delete you comment and flag you as abusive under these two terms of service: (1) Your comments are off-topic, and (2) They are intended to provoke.

The late great Pulitzer Prize winning Chicago columnist Mike Royko said it better than anyone
in a column on November 21, 1995
"No, I won't condemn anyone for putting ketchup on a hot dog. This is the land of the free. And if someone wants to put ketchup on a hot dog and actually eat the awful thing, that is their right. It is also their right to put mayo or chocolate syrup or toenail clippings or cat hair on a hot dog. Sure, it would be disgusting and perverted, and they would be shaming themselves and their loved ones. But under our system of government, it is their right to be barbarians."

This is not just a Chicago prejudice. In Detroit, the town that hates Chicago, Charley Marcuse vends hot dogs at Comerica Park for Tigers games. He is world famous for his operatic cry of "Ho-O-ot Do-O-ogs," a chant that delights and infuriates some fans. But if his siren song lures you in, don't ask for ketchup. He'll tell you in his tenor in no uncertain terms, "There is no ketchup in baseball!"

Nobody drove home the point more profoundly that Dirty Harry. In the film Sudden Impact, Clint Eastwood, playing San Francisco detective Harry Callahan, a.k.a. Dirty Harry, appearing at a crime scene, blows his top while watching a cop munching on a hot dog: "Nah, this stuff isn't getting to me, the shootings, the knifings, the beatings, old ladies being bashed in the head for their social security checks... Nah, that doesn't bother me. But you know what does bother me? You know what makes me really sick to my stomach? It's watching you stuff your face with those hotdogs. Nobody, I mean nobody puts ketchup on a hot dog."

In another film, the 2005 remake of the movie Bad News Bears, Tanner Boyle declares "My dad says the only people who put ketchup on hot dogs are mental patients, and Texans."

Cecil Adams, syndicated author of the popular Q&A column "The Straight Dope" and self-proclaimed "The World's Most Intelligent Human Being," tried to explain the problem in 1991 in a column called "Why is there no ketchup on a properly made hot dog?" From a culinary standpoint he explains "Ketchup is destructive of all that is right and just about a properly assembled hot dog... Ketchup smothers the flavor of the hot dog because ketchup makers add sugar to their products. That takes the edge off the highly acidic tomatoes, but it takes the edge off everything else, too... Put ketchup on it and a kid will swallow anything -- and from there it's a straight shot to Velveeta cheese, Franco-American spaghetti, and Deborah Norville."

Actually, ketchup was not always sweet. Click here for more about the history of ketchup.

Purists like Adams argue that one would never put sweet ketchup on a steak, so why defile an all-beef frank? Of course the sweetness argument has a fatal flaw if you are a Chicago Dog purist. The standard Chicago Dog has seven compulsory ingredients offered in all of the estimated 1,800 hot dog stands in the city (where hot dog restaurants far outnumber burger joints). The Chicago Seven are mustard, raw onions, hot sport peppers, tomato slices, a dill pickle spear, kryptonite green pickle relish, and savory celery salt click the link for the recipe). Yes, there it is, right before your eyes, dear purists, glowing in the dark: Sweet pickle relish colored with blue dye to give it the signature iridescence of the relish in Chicago.

In an August 3, 2011 Chicago Tribune column titled, "Don't let anyone tell you ketchup can't go on hot dogs," Kevin Pang challenged Chicago pride as deeply as the day the Bears fired Mike Ditka. "For many of us, we know deep inside that ketchup indignation is a facade, a narrative we fulfill for civic pride. We have the Second City complex. We have two baseball teams with one World Series championship between them since Woodrow Wilson was president. We lost the Olympics. Our governors have this thing for committing felonies." Pang quotes Jeff Ruby, dining critic at Chicago magazine: "My stance is that it's perverse for any person to tell another what he can and can't put on his food. That's foodie fascism."

In a followup article the next day, Phil Vettel, the Trib's restaurant critic asked around. He asked Nick Kokonas, co-owner, Alinea, called by many the best restaurant in the nation. "To this day I only order them one way: mustard only. The mustard must be yellow mustard. I enjoy pickles on the side. Tomato too. I really like Dijon and grainy mustards and if I am having a certain kind of sandwich or making a salad dressing, they are wonderful. But a Chicago dog has one thing: yellow mustard. One of my sons puts only ketchup on his hot dogs. It is troubling. But to answer directly, it is never OK."

Doug Sohn, chef/owner, Hot Doug's, called by many the world's best hot dog restaurant, said, "I'm more morally opposed to food rules than I am opposed to ketchup on a hot dog. I don't think the flavor of ketchup matches well to other toppings, but if someone wants ketchup on their hot dog, and I know this sounds like heresy, I've got no problem with it. However, if you order a hot dog with everything, we're not putting ketchup on it. Tsuris like that I don't need."

Merrill Powers, a friend of mine who competes on the barbecue circuit tells this tale: "My son has been frequenting Gene & Jude's, a well known Chicago hot dog joint. I had never been there and he asked if we could go there for lunch. Not being one to deny myself a good lunch, I agreed. While in a very long line, he says, 'They have the worlds best ketchup here, you have got to try it. It's not bottled, I think they make it here.' OK, 17 year old son being helpful, I should have been suspicious. Following his advice, I asked for my dog with ketchup and onions. The entire line stopped, leered at me and I was told to go to the back of the line. They were serious. They would not serve me! They don't even have ketchup for their fries. Which are fresh cut and out of this world. My son and his friend were laughing hysterically! I had the last laugh though... I had the money and he had to go to the back with me! He didn't think that part was funny."