Almost everything tastes better with ketchup.

For some, fried foods and the like are mere vessels to transport the delight that is ketchup from plate to mouth. Justifiably, the condiment is a near-requirement when it comes to French fries.

It's not often considered a diet-buster, but topping food with ketchup actually involves a lot more sugar than most people realize. That's because a single fast food-style packet of ketchup contains a mere two grams of sugar -- and while that's not a lot of sugar by any means, you're probably even now admitting to yourself that a single packet is rarely enough to satisfy your ketchup-to-fry ratio requirements.

If you're squeezing from a bottle of Heinz, a serving size is one tablespoon, and contains a still-modest four grams of sugar. But this is what one serving looks like next to a small order of McDonald's fries: 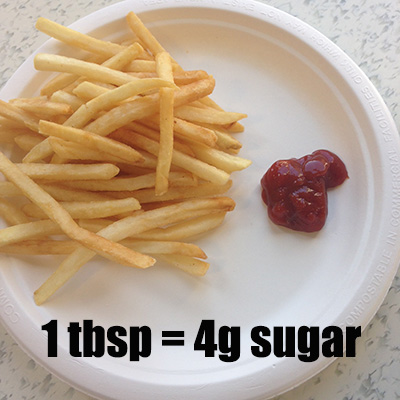 If you're fond of ketchup, that is probably not enough ketchup. No way, no how. This is what two servings of ketchup looks like next to the same order of fries: 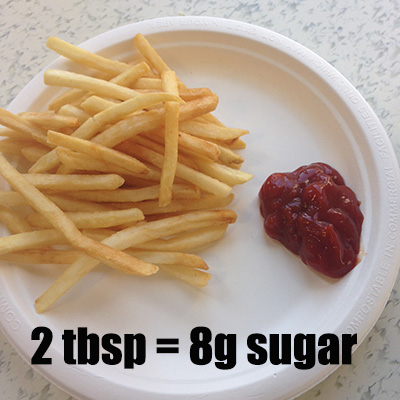 Still not enough? Why not give the bottle an extra squeeze, adding another serving of ketchup? 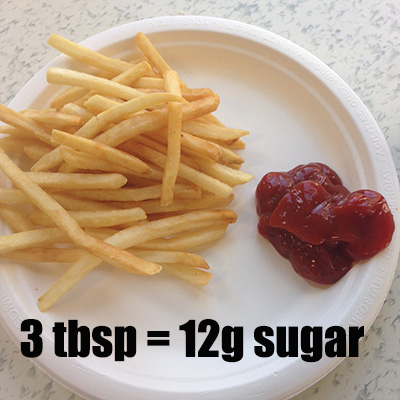 Dip into every last drop, and you've consumed more sugar than the amount in a Krispy Kreme donut. Did you put ketchup on your burger as well? Let's add another serving to the plate: 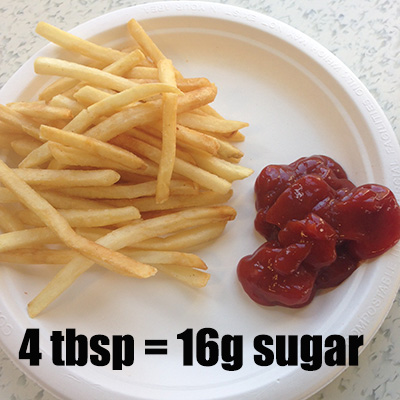 You could could have eaten more than half of a Snickers bar for this amount of sugar. But you'd never put ketchup in the same category as candy, right? Let's say you're the type to put ketchup on everything, and add just one more serving: 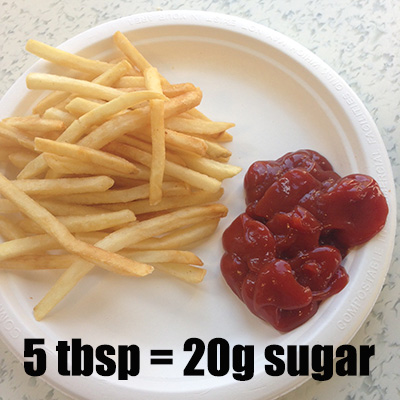 If you ate half a cup of Haagen-Daaz ice cream, you'd be consuming fewer grams of sugar than you would eating this much ketchup.

This isn't to say you should relinquish your love for ketchup. But the visualization could encourage you to squeeze a serving less if you're attempting to limit your sugar intake. Sugar is partly to blame for much of America's obesity epidemic; Consuming too much can increase person's risk for other ailments, including depression, diabetes and heart disease. Don't let the sneaky culprit undo your health efforts without you even knowing: Read labels, and remember that portion size matters.

Arizona Raspberry Iced Tea
Amazon.com
These recognizable-anywhere cans are bad news: They contain 23.5 ounces, nearly three times the suggested serving size for the tea inside. With 90 calories per 8 ounces, finishing an entire can adds up to almost 270.

Flickr photo by libookperson
Advertisement
Minute Maid Lemonade
Amazon.com
A 12-ounce can of the summer favorite clocks in at 150 calories, more than a can of Coke and the same as a can of Pepsi.

Photo from Amazon.com
Advertisement
Dr. Pepper
Amazon.com
A 12-ounce can clocks in at 150 calories, more than a can of Coke and the same as a can of Pepsi.