South Carolina State Senator Kevin Bryant has removed a classy photo from his website showing Osama Bin Laden next to Barack
Obama with text claiming the difference between them is "just a little B.S."

Update: Interview with Bryant added below.

The photo was highlighted by Wonkette and The Hill, among other sites, and when I tried to access the blog post in question at 3PM ET, it had been removed from Bryant's website. 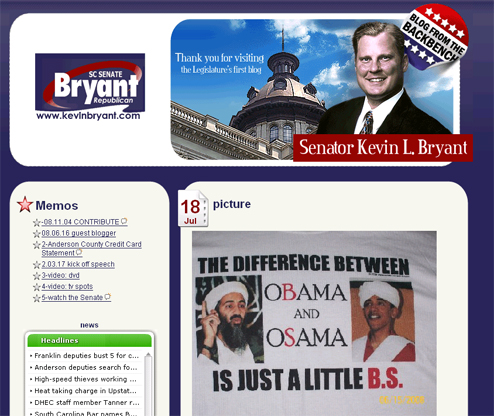 Bryant appears to have been a longtime McCain supporter, having posted a Draft McCain press release all the way back in August 2006.

UPDATE: The blog post now appears to be available again.

UPDATE II: I just got ahold of State Senator Bryant over the phone, and asked him whether he thought the image was appropriate.

"It was meant tongue in cheek," he said, adding, "I've got some questions about Senator Obama's ties to -- such as his comment that we should negotiate with Iran. Iran's a country that would like to destroy Israel, that bothers me. But is this picture appropriate? I don't know." He let out a loud laugh. "It's gotten a lot more attention than I would have expected."

Does he think Obama is actually has terrorist ties? "I don't think he's tied to terrorists, no. I do think he's probably more sympathetic to nations that allow terrorism than I would prefer. And that's why I posted it. Am I saying that him and Osama work together? No, I'm not saying that at all."

And what religion does Bryant think Obama practices? "That's a good question. I don't know."

Bryant says he's supporting John McCain for president, and that he is trying to figure out how to remove the Osama-Obama image from his website. "I may put it back up, I may not," he said. "I just thought I'd take it down and think about it."

He added: "You know, blogs are for satire and whatnot and, um, that's why it's up. It's similar to the New Yorker picture. Maybe that's why this has gotten so much attention, because of that thing that came out a couple days ago."

Columbia, SC - The South Carolina Senate Democratic Caucus today called state Senator Kevin Bryant's posting of a photo of Osama Bin Laden next to presidential candidate Barack Obama classless. The photo, with a caption claiming the difference between them is "just a little B.S.", has been removed from Bryant's official website.

"Senator Bryant's posting of this offensive photo is classless and it has no place in politics. Bryant should be more concerned about serving his constituents, who pay his salary, than posting garbage like this on his website. The voters of Anderson County deserve a state Senator with better judgment."