Kevin Costner, who just turned 60 earlier this week, can do a lot of things.

“I can make a love story. I can make the American baseball movie. I can make the political thriller, the Western, the romantic comedy. And sometimes you get to make a movie about the moments that you’re living,” he told The Huffington Post Wednesday in Los Angeles.

Costner's newest film, “Black or White,” is a family drama centered around a custody battle, but the complexities of race are examined at every turn.

“We are living in this moment,” he continued, referring to heightened discussions and displays of racial tension in the country. “[The film] wasn’t timed for any of these things, it was made before some of these seminal moments that have seemed have caught our attention. But I have been very aware of race for a long time. And I never saw a movie that dealt with it the way that this did. That’s the hope. That it gets under your fingernails.”

Costner stars in the film as a grandfather who has raised his granddaughter along with his wife after their daughter died in childbirth. But the film begins with an additional loss. When Costner’s wife dies in a car accident, he is left to raise his granddaughter alone. A family custody battle soon erupts when the granddaughter’s black family, who live in South Los Angeles, petition to adopt her.

Academy Award-winner Octavia Spencer plays opposite Costner as the paternal grandmother, and you would think that pairing these two on screen would open any door. But in fact, Costner ended up financing the film himself when all major studios turned it down.

Believing that many liked it but couldn’t see how it fit into their current slate of films, Costner says that choices have to be made and this one wasn’t an obvious one for the studios.

“That’s okay. That’s fair," he said, shaking a cowboy boot casually in front of him. “But that doesn’t mean I have to back away from it. I don’t want my life to be orchestrated by what other people like or don’t like. I want to take the chance on something that I feel is story-worthy.”

The film illuminates tensions that many mixed-race families struggle with today. Is the granddaughter black or white? Does she belong with one side of her family when the father is not in the picture? Or should she stay in the only home she has ever known, but with her grandfather who loves her but is now on his own and has shown more than a proclivity to crack into a cocktail at any hour of the day.

One morning he gets lost taking her to school because it’s something that his wife always did. He struggles to brush her hair from the bottom up because he has never had to do it before. He ties a bow in her hair like a shoelace. 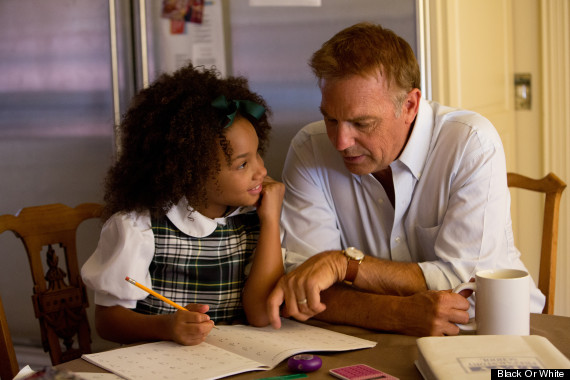 The youngest star of the film, 10-year-old Jillian Estell, beat out over 1,000 other actresses for the role. Costner, who also produced the film, sat in on the casting process once it was down to the final three.

But it’s not always easy to tell if you’ve made the right decision, he says.

“You’re not sure when you choose. It’s not like it’s so clear-cut,” Costner said of casting young actors. “There are a lot of weird variables that come above someone being able to say lines. Her parents are going to be on set. It can be a nightmare, to be really honest, There had to be a lot of real, raw emotion and she was able to find it.”

The chemistry between the two works on screen. There is something awkward and, of course, sad about her grandmother being gone, and even though she has lived with her grandfather her whole life, Estell's character also longs to know her absent, drug-addled father.

But the connection between Costner and the young Estell is not the most important relationship in “Black or White.” Filmmaker Mike Binder wrote the movie for Costner.

The two worked together on 2005’s “The Upside of Anger” -- another family dynamic drama -- and according to Costner, Binder has written four or five scripts for him since then. He has said no to every single one. 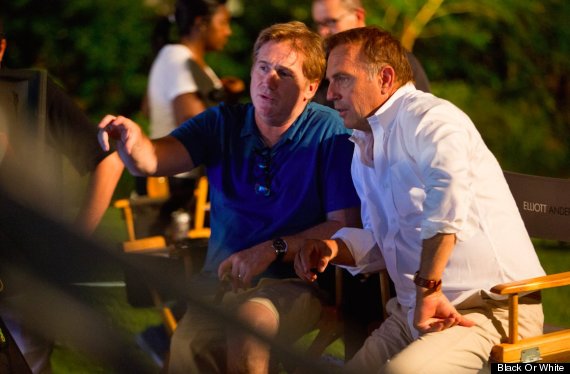 “But he was dogged,” Costner exclaimed. “Not only was our professional relationship at risk, but perhaps our friendship was too. But he understood that when I did say yes, that’s what I meant.”

Much of the film is based on elements of Binder’s own life, with some twists and reversals added in. Race and prejudice, along with buried family pain and resentments, come out brightly in the custody trial. Even the way we use language is examined.

“I’m around people who say they’re colorblind,” says Costner. “I say, ‘What does that mean?’ I think what they’re saying is, ‘We want things to be grey. We don’t want to have all of this junk.’” Good for you, Costner says. But he still doesn’t believe people can be colorblind.

When asked what he hopes the film adds to the changing conversation about race in America, he answers broadly. “If I’m going to tell stories, I have to tell them in the most honest way that I can. This thing is layered,” he said.

“It looks at where we are at with race today and how race gets used sometimes as a tool. That’s not to say that it’s not there -- the problems with race are real -- but sometimes it can be used when it’s not appropriate. And it holds us back.”
Adding that he would never have made this movie if it felt heavy-handed, Costner says that instead, he made a movie that talked out loud to him.

“I have a real, good strong instinct about what I like. I don’t question myself. I then move to the next step, which is will other people also feel that way? But for this one, that wasn’t a big leap,” he said. “People enjoy the truth. And they enjoy language that maybe redefines how they think. This movie did that for me.”