"I have a pretty good grasp on my life, and I'm lucky to be their father."... Kevin Costner

Kevin Costner celebrates Father's Day 365 days a year. Even though there's one day on the calendar that is dedicated just to fathers, the "Field of Dreams" actor never forgets for one minute -- day after day -- that he is blessed to be the father of seven children: Annie, 30; Lily, 27; Joe, 26; Liam, 18; Cayden, 7; Hayes, 5; and Grace, 4.

Let's face it, most people think that "Hollywood" fathers just call it in when it comes to day-to-day parenting. In Costner's case, he made sure that he wasn't (and isn't) an absentee father. Costner and his first wife, Cindy, raised their three children: Annie, Lily, and Joe. Liam was raised on the East coast with his parents. And, now, Costner is nesting again with his newest brood, Cayden, Hayes and Grace, with his wife, Christine.

The Huffington Post caught up with Costner to pick his brain about what Father's Day means to him. He was quick to point out that although Father's Day is a nice way to celebrate a special day with your children, it's every day of the year that brings joy and special blessings when it comes to being a loving proactive parent. (Check out our slideshow below to see photos of his family.)

It isn't different. I'm happy to not have to look back and go, "You know, I didn't do it right the first time." That would be a disaster for me to go, "I was so busy doing my career, doing my things that gosh, this second time I really have so much time and I really got to see what it's about." I didn't. I had reverse of that. I felt really like I didn't miss a thing with my first three. I've heard a lot of men in my position go, "I was so busy doing this, I feel I missed it." They had a second marriage and then they've had these kids and they kind of say, "Wow, I don't even know what I've missed." If I can tell you anything, I'm happy to not ever have to say that. In fact, that was my big consideration having children the second time was, "Can I give to these three what I gave to Annie, Lily, and Joe?"

I have to be honest, I have a pretty good grasp on my life, and I feel lucky to be their father. I feel that Hayes, who's in the middle of these latest three and sometimes the middle kid, gets talked to second, or gets talked to in the middle. It's not a myth that they wonder how they fit on some level and I'm really conscious of that.

They each want a story at night, "Tell me a story." What they always want is a story about me about when I was a kid. I don't know why they are so into that, but for the last two years it's only a story about what I did. I think they measure themselves by me and the kind of things I did.

Cayden is just a good older brother. He's so full of life and adventure. At night he wants stories about what I did... stories of adventure that I've done. It's not like a regular bedtime story. It's like: "What did you really do?"

This night was no different, except that after I talked to Cayden, who's the oldest, I went over to Hayes. Again there's the one-two punch, he's the two-punch. I try to mix that up once in a while, but I felt like I hadn't mixed it up in while.

I'm telling him his story and then at one point I stopped and I looked at him. I just knew I needed to say something and I said, "Do you know how proud I am to be your dad?" He's 5-years-old, so whether he digested it or not, it's not as important as he just needed to hear that. We were almost eyelash to eyelash, I was so close to him. He just looked at me and he goes, "Yeah." It's not really important if he does or doesn't understand, but it's more important that you say it.

Grace and I have a coffee ritual. She gets up and makes me coffee. She knows how to step on the [step stool]. I have my hands on the small of her back. She's four but she knows all the different icons you're supposed to push on the coffee machine. She picks the cup and starts the machine. I get the whipped cream out of the fridge and so that's our little ritual.

What's the one thing you hope your children remember about you?

That's so sweet. What's the hardest part about being a father? The first time around and the second time around?

Well I don't know about the first or second, but I'll look backwards on that. You think about when you're a kid and your parents really got on you in some kind of disciplinary way. You walk out of the room and you go, "Wow they toasted me. You really roasted me. How do they know how to say all of that?" The truth is, as mentors -- as parents -- we almost don't know what we're saying. Kids think we do.

The truth is if you come at them with love and care and a level of thoughtfulness your kids look back and go, "You knew what to say to me. You knew what to say." What we know is we walk out of the room after kind of really drilling down on them and look at our partner -- my wife -- and go, "I don't even know what I said in there. I don't even know if it made any sense to them."

It is hard sometimes to have all the right words at the right time. Children process what we say to them every day.

They do and you only get rewarded with that much later in life -- like with Annie, Lily and Joe -- when they tell you something that you've long since forgot and yet it stuck with them.

What would Annie, Lily, and Joe say is your best trait as their father?

I'm sure you're very proud of Annie, Lily and Joe. Tell me about each one.

Annie graduated from Brown. She's a real worker. She helps write legislation in Rhode Island, environmental legislation. She's probably going to do a documentary right now. She's living on her own wits. She's just a source of pride for me.

Lily is an amazing singer and songwriter. She can be a really huge star if that's what she wanted. I'm not sure she wants that. She's really gifted. Lily's way is not to knock doors down. I think she wants a quality of life. She's seen the quality of life that we've had and sometimes the idea of stardom, I think, is a mystery to her. She's content with performing. She's not a person who is trying to angle how to go faster and go higher and go larger. It's just not how she's built. She has an amazing talent. Does she want to give it to the world? I don't know.

Joe just graduated Boulder. He's really gifted in music. He's settling in on what his journey will be... and his mission. I think the best indication of Joe is that he's a solid person and his friends are really solid. You really can judge how well he has done in life by the quality of his friends and how he has kept them. I've tried to encourage him, it's good to be your own person.

What's the one life lesson you hope you've taught Annie, Lily and Joe at this point?

I think that their life lessons a lot of times are what they observe. They've seen me not be afraid to chase the things that are important to me. They've seen me not give up on the things that are important to me.They've watched me when something didn't work, not give up on it and figure out why it didn't work. I have projects that I've never given up on. I don't fall out of love with things. My opinion doesn't change because the world doesn't feel that it has value.

What's the hardest part about having three children, seven and under?

Figuring out their athletic schedule and making the car not try to smell like a locker room. They have their soccer stuff. They have their baseball stuff. They're kids, they lose everything. We're never going out the door without having to go through every room in the house to find his hat, his glove, his thing.

My life, for whatever people think about it, is really so normal. I love making movies. I love making music. Those have brought a level of worldwide fame on some level, but it's not really how I think of myself. It doesn't help me get through my day at all here. I love my family and I love being a father!

We reached out to Annie and Lily for some insight into their relationship with their father. We asked them to finish these sentences:

Annie... how to throw a baseball and football better than most boys.

Lily... to dream big, work hard, and surround myself with good people that challenge and inspire me daily.

I always knew my dad loved me because...

Annie... he took the time. He genuinely seemed happier and more interested in hanging out with me and Lily and Joe than anyone else in Hollywood.

Lily... he'd always say so. He made it to every little league game, every championship, every play and that made me feel like I was the center of his universe -- the way every child deserves to feel.

My favorite memory of my dad is...

Annie... when he surprised me on my 16th birthday in an Elvis suit and serenaded me and all my friends.

Lily... My parents used to have get togethers with their friends at our house in La Canada, California on Sundays; a potluck gathering. The men played basketball while the wives watched and heckled. The kids were sometimes nearby playing, scraping knees, or finding bugs -- that sort of thing. On one occasion we gathered after church. The men wouldn't let their suits deter them. My dad removed his coat and shirt, but cinched his tie around his head like a bandana. I thought in that moment, "my dad is a rebel." He could rile the crowd and it was playful and fun. I knew that I wanted to be just like that when I grew up.

Kevin will be hanging out in Dyersville, Iowa for the 25th Anniversary of "Field of Dreams" on Father's Day weekend which will include many cast members. He plans to take the whole family. His band Kevin Costner and Modern West will be performing.

PHOTO GALLERY
Kevin Costner And His Kids
Download
Calling all HuffPost superfans!
Sign up for membership to become a founding member and help shape HuffPost's next chapter
Join HuffPost 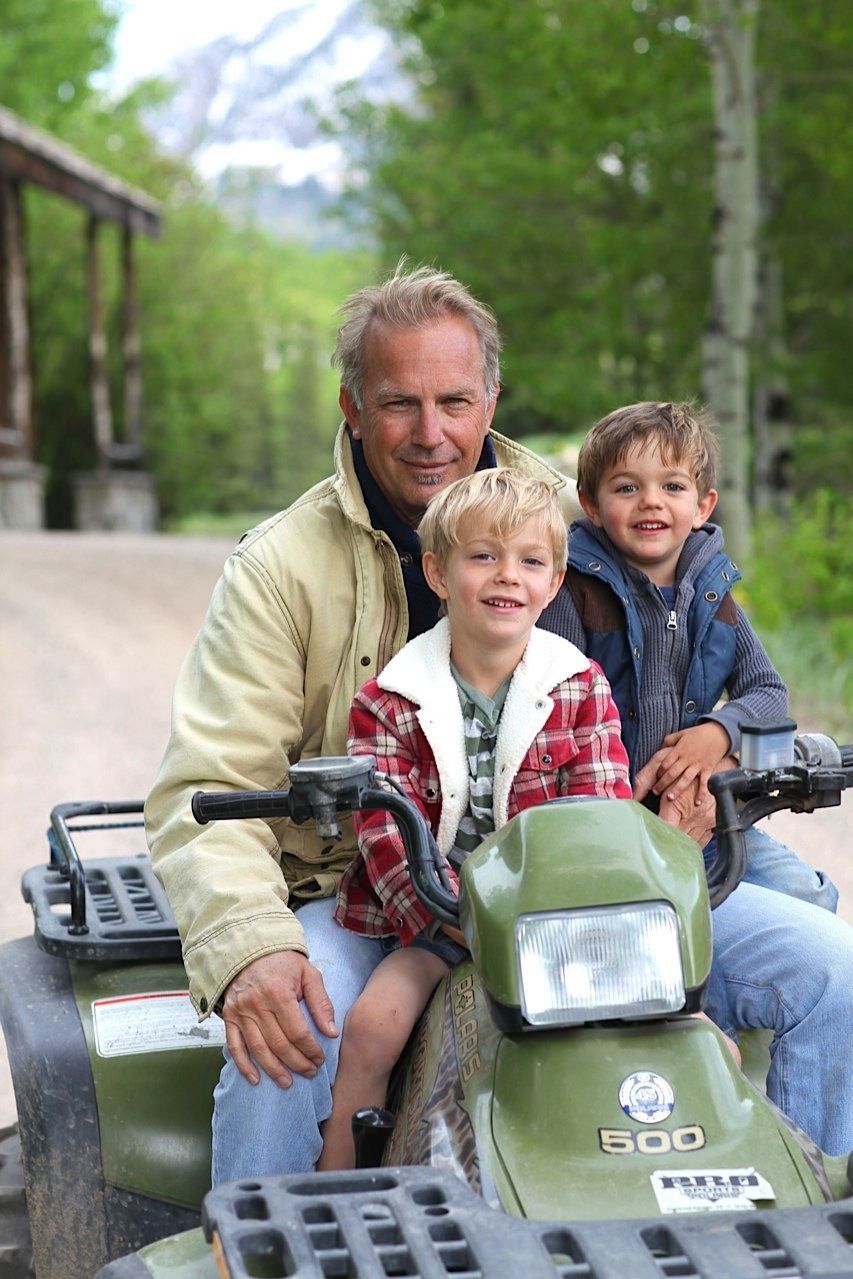