Kevin Costner is best known for playing cowboys, prosecuting mobsters, and building a baseball diamond in a corn field. But in his new movie, "Swing Vote" (full disclosure: Arianna Huffington has a cameo role), he plays a slob named Bud -- a single dad who drives an old pickup, lives in a trailer and drinks himself to sleep every night. When his 12-year-old daughter, played by Madeline Carroll, sneaks into a polling station to vote in his stead, all Hell breaks loose, and Bud finds himself at the center of a political and media storm that reminds him that every single vote counts.

We spoke to Costner last week from L.A. Find out why he hasn't made any sequels, why he's never read Wikipedia, and what he'd ask the presidential candidates. Here's some of what he had to say:

What's the film about?

It's an American comedy. We've got a very big premise, which is that somehow the election winds itself down to a single vote in a swing state -- New Mexico -- to a single little county called Texaco, where there's about 400 voters. And a single vote has been cast that hasn't been counted properly. The whole world descends, literally. They find out that the vote was cast, they believe, by this drunk. Through a technicality -- through an actual law -- he has ten days in which to recast this vote that didn't take the first time. This whole media circus begins to surround him.

What are the deeper political questions?

The good thing about the movie is it isn't a message. It's entertainment first. The movie deals with a father and a daughter, who's in the fifth grade who's having to do way too much. That really is the heart of the movie and it's set against the backdrop of politics. 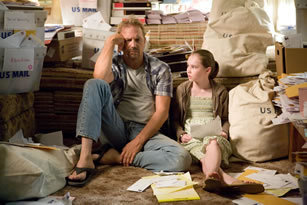 Do you think it's going to convince more people to vote?

It was surprising to find in the movie that there's no reference made to the Iraq war. Why leave that out?

I don't think in this particular movie it was germaine. It may or may not be relevant 20 years from now and the hope is the movie will stand the test of time. We talked about it because Iraq is on all of our minds, but when we tried to incorporate that, we realized it would dominate the movie.

Kelsey Grammer looked a lot like Nixon in the movie. Was that intentional?

No, Kelsey had a lot of presence and he looked very presidential to me. He was also on the other end of the scale from someone like Dennis Hopper, who was kind of a prototype Lieberman.

If you could ask Obama and McCain one question, what would it be?

I guess the question would be, "Can you lead the country without worrying about your second term? Are you willing to be that kind of politician?" 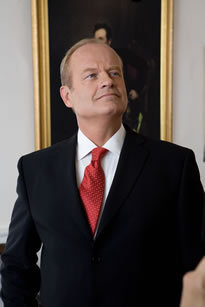 Have you looked at your Wikipedia profile?

No I've never looked at it. I don't know what it is. I was raised with wolves.

It's the online encyclopedia that anybody can edit. Your entry says, "Costner was registered as a Republican until the 1996 election, when he changed his registration to Independent. He supported Democratic candidates in the 1992, 1996, 2000, and 2004 Presidential elections; however, he still prefers to be known as a "conservative." What do you think of the fact that that info is out there on the Internet?

Well that's interesting. They're pretty close. I don't prefer to be known as a conservative. I'm not a Republican. I basically was raised in a house that was a Republican house. My politics came out my kitchen table, listening to my parents. I thought the people that protested against the Vietnam war were unpatriotic because my brother was fighting over in Vietnam. I was only 14 years old. As I got time and distance I realized it was just a difference of opinion and their opinion wasn't necessarily wrong. As a person evolves they begin to have their own voice and their own way of thinking. I wasn't ahead of my time.

Why is it that every movie you're in -- whether it's starring Morgan Freeman, Sean Connery, Kelsey Grammer or Nathan Lane -- ends up being a "Kevin Costner" movie?

Yeah, in "Open Range" I put Robert Duvall's name first just because I felt that way, but I can't speak to why that is. That's why I always say to people who are really concerned about credit, "Don't worry about your credit. People are going to see the movie and see who's who."

Is it more a blessing or a curse to be the one everybody remembers? 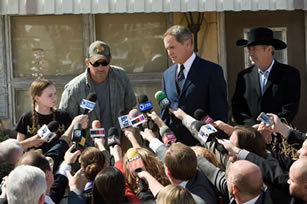 Ever thought of making Prince Of Thieves 2?

There's an interview with Robert Ebert where you said you wouldn't make any sequels.

No, that's not true. I would be in a sequel if it had a chance of being as good as the first. That's the measuring stick for me. I haven't seen a well-written sequel to any of my movies yet. A studio knows there's money at the end of that rainbow but I don't want to be embarrassed by the second movie, and I don't want to apologize for it and then go make a third one.

You're in a band called "Modern West." Your character sings a song in "Swing Vote" -- did you write that?

Yeah, I co-wrote that. It'll be on the soundtrack and it'll probably be on a CD that's coming out in October. I think the CD's going to be called "Untold Truths."

Working on any new projects?

I've got a horror film coming out sometime called "The New Daughter."