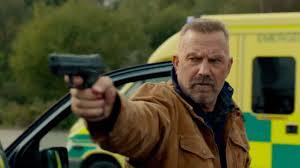 Orange is the new black for one-time A-lister Kevin Costner in Ariel Vroman's crazy sci-fi espionage actioner Criminal. Costner plays the gnarly Jericho Stewart. He's a violent, hard-biting death-row denizen - Hannibal hold the cannibal - totally lacking empathy and remorse. And Costner relishes the role like a good chianti after playing so many goodie good guys in such films as Field of Dreams, The Bodyguard, The Untouchables and Robin Hood: Prince of Thieves.

Costner's delight in playing bad to the bone is what drives a smartly cast star vehicle that fast and furiously leaps from action set piece to action set piece in an obvious effort to avoid the giant plot holes imperiling the story. When undercover CIA operative Bill Pope (a solid Ryan Reynolds) flatlines with key data CRUCIAL TO THE FREE WORLD in his brain, spook chief Quaker Wells (Gary Oldman) puts a far-fetched Hail Mary pass into play.

Enter neuroscientist Dr. Franks (Tommy Lee Jones), who has been doing top-secret experiments transferring memories from one dead rodent to a live one. OK, here it comes: what if he can retrieve Pope's mental data from the comatose agent and into the only body in the free world that's a match: that of the killer Jericho.

Can Dr. Franks accomplish it before CIA honcho Wells pops a vein in his forehead? You betcha! Is it a good idea? Probably not.

But it's an absolutely great excuse for Costner to play a physically challenging action antihero. He also gets to do that two-brains-in-one-body scramble - and we see this felon without empathy (I won't spoil the backstory but it's pretty great) slowly open up to a new world of emotions as secret agent, husband and father Pope's memories mix with his own in a mental blender set to ten.

This mental mash-up creates some awkward almost romantic scenes between Costner's Stewart and Pope's gorgeously weepy wife Jill (the future Wonder Woman Gal Gadot). When Stewart starts doing the little secret hand motions the Popes shared it's hard to swallow - and about as sexy as Carol Burnett tugging her left ear to let her watching grandmother know that she was doing alright.

Still, for all its silliness, Criminal delivers some stunning action sequences - in an ambulance, on a bridge, in a jail cell, from a submerged SUV. It also unites three stellar actors -- Jones, Oldman and Costner - who completely buy into and own every scene they're in. Sure, Reynolds is in there, too, but it's the older guys who take over and run the action. As guilty pleasures go, it's hardly criminal to enjoy this peculiar sci-fi, espionage, action thriller - and a thoroughly cunning Costner.

(This review originally appeared on ZEALnyc.com)