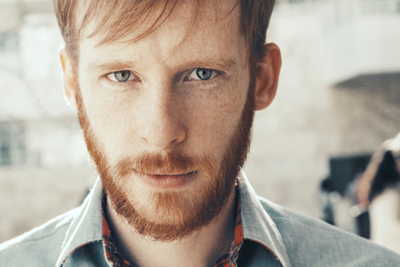 Asked to describe his music, Kevin Devine says, "I think I write a certain style of pop music that is inflected with soul and punk. It's not on the radio but takes its cues from people like Nirvana. Some songs take on those shapes."

Kevin Devine has, clearly, thought a great deal about the path of his career. The recently married singer says, "I want to be able to have a life in music, I am not concerned at this point with magazine covers or those metrics of success. I've gotten to have a singular, interesting career path. I never had the rocket ride but, when you do, you have a steep descent. I'm taking the local."

The 33 year-old Brooklyn, New York native (you can probably tell he's a New Yorker from his "local" subway analogy) recalls music being part of his life since....well....since forever. "I remember being little kid in Bay Ridge, Brooklyn, and Mom would play the Beatles, Phil Ochs, Michael Jackson, Springsteen.That was my parents' music. In second grade I was in Earlysville, VA and the local radio played "Sweet Child of Mine" by Guns and Roses. It was magic. I wanted to play music and was writing derivative songs when Nirvana came out. That's what mostly influenced me -- Kurt Cobain, Elliott Smith and others like them."

From early on Devine understood what music and a musician can mean to fans, as he was himself an ardent fan. On April 8, 1994, the day Kurt Cobain took his own life, Devine recalls he was at a Rangers hockey game with his brothers. He heard the news when he got back to his brother John's home in Bay Ridge, Brooklyn.

He says, "My dad, who was a 33-year veteran of the NYPD, called. My dad was a lot of great things, a lot of challenging things, but he wasn't always the most emotionally sensitive dude. He was making sure I was OK 'cause he knew how much I loved that guy's music and he was somewhat aware of my delicate age. My mom was very aware that it must have been for me like it was for her when she was in her early 20s and found out John Lennon had died.

"It was an interesting thing to be a teenage kid who was so in love with this guy, with his music, and that's kind of the first awareness of the kind of contract between yourself and these performers that doesn't really exist."

During his childhood Devine spent time in Queens, Staten Island and Manhattan. He is a graduate of Fordham University with a major in journalism. He began playing music in clubs around New York playing with his band, Miracle of 86, a name honoring the NY Mets' 1986 World Series victory. He recorded on several labels, including Capitol.
Devine's musical stature grew and he made six albums. In earlier this year, he decided to record, release and distribute his own music and posted his project on Kickstarter. He more than doubled his goal of $50,000 in less than 12 hours.

The first video he submitted to Kickstarter was rejected but the second one was posted. Check it out:

Of his decision to turn to Kickstarter, he says, "I've made records for five labels in the US over 10 years, ranging from tiny punk rock labels up to multinational major label corporations, and none of them worked particularly well, for hundreds of reasons. So for me, the idea of cutting out that middleman, as well intended as he might be, and having a direct relationship to the people for whom the records are ultimately made, was an exciting one that felt kind of tailor made for someone in my position. I had misgivings about perceptional backlash and operational follow-through, all of which have been obliterated. I feel like the results speak volumes about the layers of investment my audience feels they have in my career; it has been humbling, empowering, gratifying."

Released on October 15 -- on his own label, Devinyl, Bubblegum and Bulldozer, produced Jesse Lacey and Rob Schnapf, respectively, have already charted on Billboard's Top 200, with Bubblegum ranked at #2 on the "heatseekers" chart and Bulldozer at #3.

Devine's musicians are called the Goddam Band. Asked why, he says, "I was listening to a lot of shit-kicking country music at the time, and thought the Goddamn Band sounded like an outlaw country saloon band, which I thought served the dual purpose of being funny and wry and a touch misfit to my music while also being totally awesome and badass. It's a fun name that has caused a fair share of unexpected trouble along the way, which is also an added bonus.

Devine's music is very personal, his response to the world around him. The subject matter of the songs is varied but he's reminiscent of the folk movement, early Dylan and others of a political nature.

He ways, "I think I spent my 20s during the Bush administration, the Iraq war, the Bush-Gore, election feeling the world was almost surreal. I spent most of my 20s freaking out about what. I was scared, paralyzed, drinking and taking drugs. I don't believe in systems and power. I believe a lot more in people." 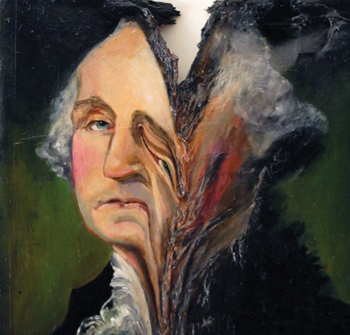 His feelings are crystal clear in his music. In fact, the cover art for Bubblegum, by New York artist Valerie Hagerty (right) was chosen, he says, "to help identify the content of the record."

On Bulldozer he sings about the "Fiscal Cliff:" "Talkin' shit about a 'fiscal cliff.' A lot of effort at imagining a situation, even a crisis. Just a distraction from the main event: They gave you credit Then cut your card up. Gave you a student loan but there's no work. Gave you a mortgage Then took your house keys. And somehow, you keep saying, 'Thank you, sir.'"

On Bubblegum, he reflects on PFC Chelsea (Bradley) Manning:

You may very well be able to see Kevin Devine on tour in the next few weeks. For his schedule, check out his website.