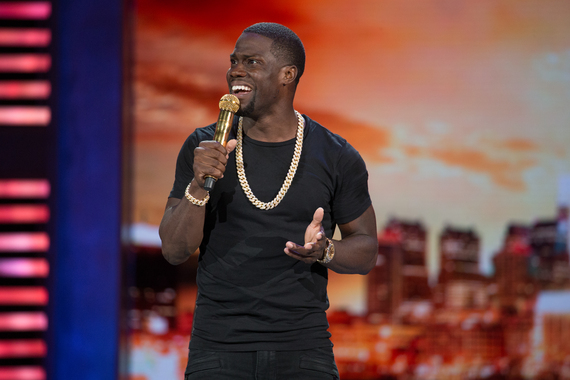 Has success spoiled Kevin Hart? Forbes Magazine lists him as 2016's highest paid comedian with an annual income of $87.5 million, from June 1 2015, to June 1 2016. Unlike many of his cohorts (Jerry Seinfeld, etc.) Hart makes lots of his income from live performances in large stadiums where he can earn $1 million a pop. So it's fitting that his latest live concert film was shot outdoors at Philadelphia's Lincoln Financial Field, in Hart's hometown. Fifty thousand people ate up his bawdy, personal humor like they were famished. Spoiled by success? Maybe. Spoiled by his fans? Yes.

The 96 minutes of hilarity opens with a mock James Bond shtick over the titles that segues into Hart hooking up with Halle Berry as they scheme and con some crooks out of their money at a casino's no-limit poker table. The spoof is funny (written by Hart), unexpected and features a cameo by a profanity-spewing Don Cheadle as Hart gets under his skin. Hart: "Don't you have an empty room at Hotel Rwanda?"

Clad in a tight-fitting black muscle T-shirt and a fancy gold-jeweled necklace he takes center stage, staring out into a record-setting night. He's filled a football stadium, every seat, ardent fans and a very multicultural audience. They've come to see a brand of comedy that eschews politics, topical news and social issues. The humor sticks to Hart's personal life, kids, fiancée and sexual prowess (he calls satisfying his paramour "Operation put a hole in your back"), or that lack thereof. Scatological humor, penis jokes, sex toys--nothing is off the table.

One of the reasons Hart's game is so prime for live performances is that fans can see him up close or on jumbo screens as he doles out his brand of physical humor. He stalks the stage, mimics odd characters (a woman with one shoulder, a man with no knee caps), prances, dances, makes funny faces and bugs his eyes out like he just saw his mother naked. It's all intricately intertwined with an endless supply of anecdotes. It's enough to make you laugh so hard you'll wet yourself.

The best joke line involves Hart sending his seven-year-old son out to empty the trashcans at the end of their long driveway, in the 'burbs of Southern California. Standing at the door he hears his kid yell and sees him start running towards the house. Its as if he's being chased by a mountain lion. Hart slams the door, locking the offspring out so he can protect himself. It's an outrageously funny bit that highlights his keen ability to tell stories that become so crazy and graphic you think that you witnessed the whole thing.

Director Leslie Small (Kevin Hart: Let Me Explain) guides the concert footage with little fanfare and lots of close-ups of folks in hysterics. Peter S. Elliot and Guy Harding cut the footage down to a tight hour and a half. It's just enough time for Hart to do his thing and not wear out his welcome. Tim Story is credited with directing the James Bond segments, which are fairly intriguing and fill out some crucial time, otherwise this live performance film would barely last 80 minutes.

Be prepared to laugh. Be prepared to sit through some routines that are not as funny as others. What gets you over the rough spots is this diminutive comedian's uncanny ability to welcome you into his life, like he's invited you over for a poker game and he's just telling you what happened to him the past week--no holds barred. Any comic who is willing to talk about the skid marks in his white underwear has no compunction about putting it all out there to get a laugh. That kind of attention-needy humor is what gets 40 million fans to follow him on social media.

If you're in his corner, this film will hit your funny bone. If you're not, he's trying to win you over. Hart: "If we can laugh together we can live together." It's a branding slogan that's too long to put on a welcome mat, but you'll get the point.

You'll be charmed and disarmed by this very mischievous and filthy rich elf.