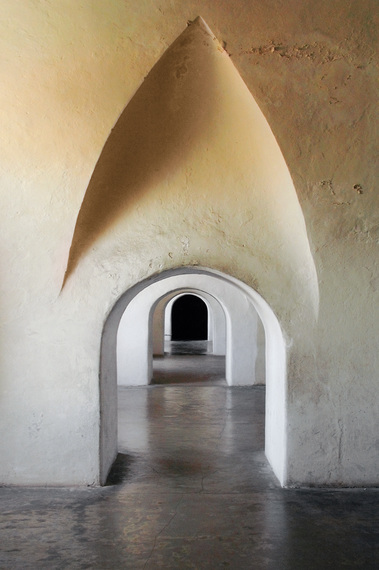 "Irreconcilable Images," the current exhibition of photographic images by Kevin O'Leary at Arcature Fine Art in Palm Beach, is a memorable event that examines the curious aesthetic merits of places and people that often display an inherent incompatibility, either by their irreconcilableness of circumstances, through images that initiate a double take, or by portraying juxtapositions taken by snap judgment of perspectives that offer the viewer a novel slant on otherwise familiar territory.
O'Leary, born in Montreal, Quebec in 1954, clearly has kept his eyes open and his camera ready to document key moments, as this collection of photographs provides undisputed evidence of many years of professional experience leading up to this fascinating show. As a young boy, he aspired to become a photographer and was a member of the photo club at Nepean High School in Ottawa, when he bought himself a Soviet Zenit camera and began to develop his own photos. Advised by his stepfather that to be a professional photographer was not financially viable or a stable career and that only a small percentage of photographers achieve fame and fortune, he put his artistic aspirations on hold and eventually earned an MBA in entrepreneurship at the University of Western Ontario in 1980. What followed was a string of highly successful business ventures in software and private equity, as well as his current presence on "Shark Tank," the TV program that showcases aspiring entrepreneurs, who as contestants make presentations to a panel of "shark" investors, hoping to persuade them to finance their products, among others, which serendipitously enabled O'Leary to seriously pursue interests beyond his vocation, including cooking, winemaking, playing guitar and photography. He cites his prosperous business career for giving him "ample time and resources" to further explore his "real passion" for photography. He also has a large collection of vintage cameras, including one of his most prized, a Leica M3. He has shot hundreds of thousands of photographs and produced over 300,000 negatives throughout his lifetime. Like many successful artists, from Damien Hirst to Dale Chihuly, O'Leary is a serious collector of objects and art. He also is a thoughtful and informed investor in photography by other artists with a concentration on Canadian photographers, including works by Edward Burtynsky, Barbara Cole and Joshua Jensen-Nagle.

It is likely that O'Leary's time spent traveling due to his stepfather's position with the UN's International Labour Organization had a strong influence on his work as a photographer. He moved frequently, living in many exotic places, including Cambodia, Tunisia and Cyprus, where he learned about world cultures and certainly encountered exciting and provocative imagery that is a universal theme in his photographs. The show at Arcature Fine Art combines the foreign and unusual while alerting the viewer to a sense of foreboding about what you are seeing. O'Leary follows a great tradition of master photographers whose impact becomes a hallmark of timelessness. His work spans a multitude of decades and geographies that have a common denominator of exquisite compositional juxtapositions.

One timeless image on display, titled Kiev, was taken in 1986 in the Ukraine, prior to the demise of the Berlin Wall, and exudes an ominous atmosphere with good reason, as according to O'Leary, paranoia over "big brother" watching you ran high and people kept to themselves, eyes down as they walked through the city. 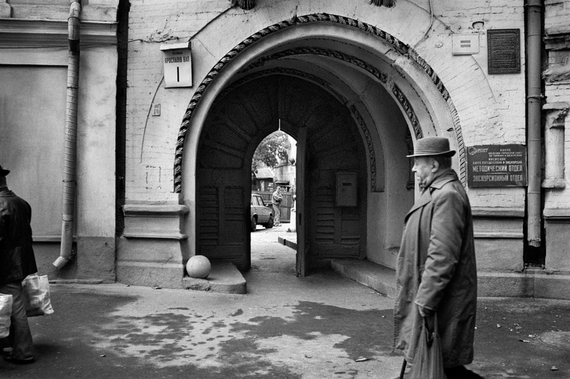 I was in Moscow during the same time period, and as I got to my hotel room the interpreter gestured with his finger towards the ceiling, silently pointing out that someone was listening in. That same chilling tone is evident in Kiev, as you can see a man suspiciously watching through the open archway door as Kevin took out his Leica camera. Nevertheless it's a great photograph that brings to mind the classic street shots of Eugène Atget and Henri Cartier-Bresson.

The power and simplicity of a black and white photo is evident in Place Vendome, taken in the dead of winter with the dark turbulent skies above the odd silhouette of the sculpture below, accented by the vertical shapes of a monument and lanterns just behind it and the grand architecture of Paris in the background. 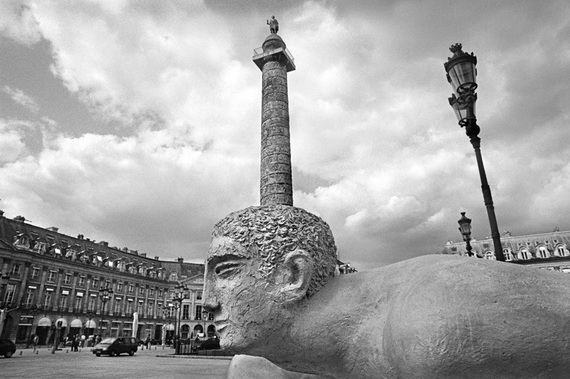 Another powerful image of contradictions is Woman on Chains, which was taken in St. Barths on Tri X 400 B&W film. In keeping with the title of the show, the setting is strengthened by the contrast between giant, solid, rusted nautical chains and the pretty girl in a soft, white, flowing dress perched on top as she inspects these relics of the shoreline. 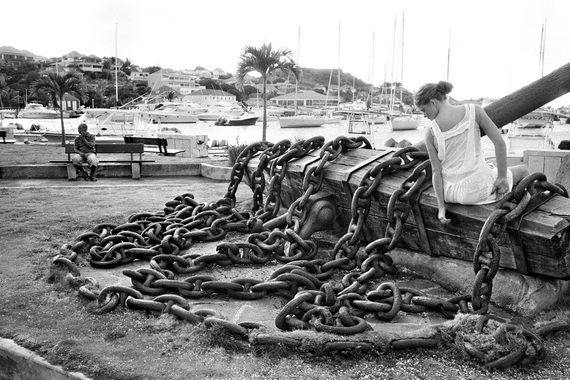 Another commanding and highly unusual image is Air Show #1, originally taken decades ago using black and white film, which was inadvertently misplaced and then years later when it was found again sent to the lab for processing. Over the years that the film was in storage, the fluctuation in temperature and humidity caused mold to grow, so when it was finally printed the eerie organic blossoms on the negative seemed to make the bi-plane look as if it was flying over the surface of another planet. 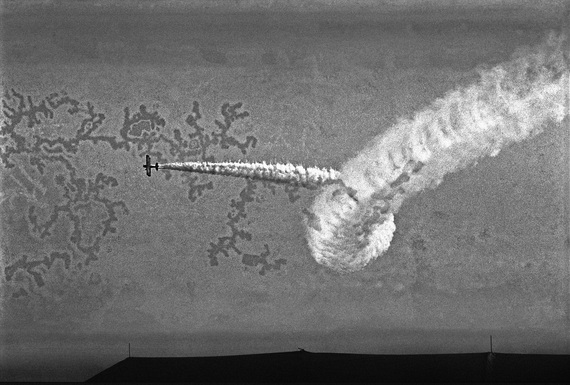 The smoke contrails remind me a bit of an abstract expressionist gesture as it twists in midair and is caught at the best possible moment in time, like a classic Walker Evans smoking chimney image.

An ideal example of "Irreconcilable Images" is Lifeguard, shot while O'Leary was walking down the beach in Nantucket and observed a second lifeguard momentarily bent down to take a bite out of his sandwich at the precise instant the photo was taken--a decisive moment for sure, to quote Brassaï. 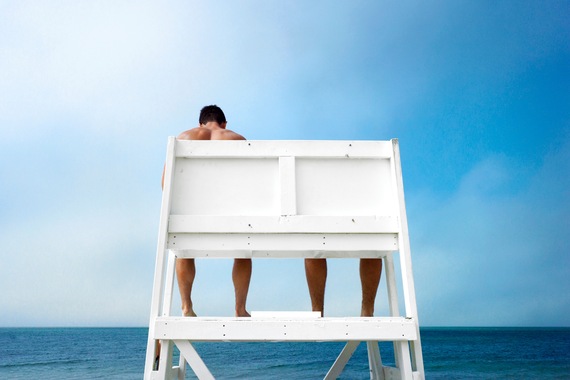 A favorite image in my own photograph collection is by Elliott Erwitt, which has a similar humorous illusion where the eight legs depicted actually belong to one human and two dogs as they take an autumn stroll down the sidewalk.

I have other favorites in O'Leary's exhibition, but space only allows me to present one more of my favorite shots: Greenland River, taken at 3,200 feet from a Sikorsky helicopter flying into the center of Greenland in late summer. 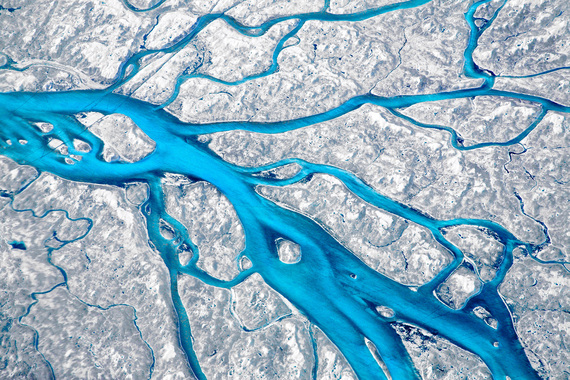 The August sunlight causes the surface ice to melt, dividing the white snow into meandering blue ribbons captured from above. A memorable quote by the celebrated photographer Diane Arbus that's appropriate for this image is "My favorite thing is to go where I've never been." Another from Arbus that's apropos to this series is "A picture is a secret about a secret, the more it tells you, the less you know." This is very true, especially in much of O'Leary's work. The blue of the river against the frozen snow reminds me a bit of classic images taken by Ansel Adams and Andreas Gursky, aerial views of patchwork landscapes and surreal twisting highway cloverleafs shot from high above the clouds. This is an unusual exhibition that will heighten your sense of apprehension and mystery about what you are seeing, which is the hallmark of a great image that remains "timeless," observes O'Leary. 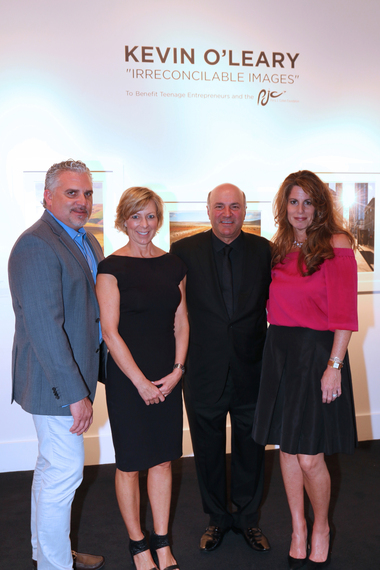 Sales of O'Leary's work are being handled exclusively by Arcature Fine Art and all proceeds will be donated to the Perry J. Cohen Foundation (PJCF) and Teenage Entrepreneurs. Perry Cohen is a 14-year-old boy who went missing at sea in July 2015, last seen leaving the Jupiter, Florida inlet on his friend's boat. He was an enthusiastic young entrepreneur, starting a car washing business when he was only six and he was a big fan of the "Shark Tank" program. This worthy foundation is a 501 (c)(3) organization, established by Perry's mom, Pamela Cohen, and his stepfather, Nick Korniloff. The mission of the foundation is to create awareness and education for all individuals around the safe enjoyment of recreational boating, fishing and water sports.