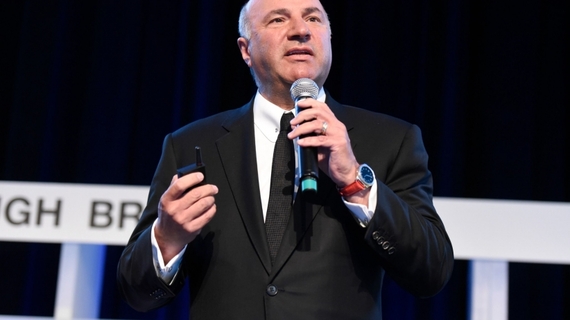 A demanding boss and a high school crush taught Kevin O'Leary one powerful lesson early on in his life.

I recently had the chance to talk with the entrepreneur, chair of O'Leary Funds and investor on ABC's reality show Shark Tank. "Mr. Wonderful," as he is dubbed by fans, told me his greatest business lesson came after he got his first job at an ice cream store as a teenager. It just so happened that a girl on whom he had a crush worked nearby.

On his first day as an ice cream scooper, his boss told him to scrape gum off the ground near the front of the store. O'Leary balked -- he didn't want the girl to see him doing that.

In that moment, O'Leary decided that he wouldn't work for anybody else again. Instead of being somebody's employee, he wanted to be in control of his own destiny. And he has never looked back.

During our talk, O'Leary shared a wealth of advice for entrepreneurs looking to follow in his footsteps. Here are seven noteworthy pieces of advice from the Shark himself:

"The most important thing for a startup company to do is to focus on sales -- that's what the first two years are about," O'Leary said.

He offered a few reasons for this emphasis: "If sales roll in, you validate your concept. If customers are willing to buy your product or service, it proves you have the right idea and now you just have to make it bigger."

He went on to explain: "Those sales will provide you with a much-needed cash flow. But growing a loyal customer base may require you to be creative." He recommends working with customers, even offering discounts, especially if they agree to pay in advance. "You can create buy-in by telling them they are helping grow the company," he said.

"If you are not willing to do that work -- to get up in the morning with a small company and go get revenue -- then you are not going to be a successful entrepreneur. It's that simple."

2. It's important to experience failure.

Everyone fails. In fact, O'Leary prefers to invest in entrepreneurs who have failed once or more because, as he put it, "the sting of failure is a very important motivator to getting it right the next time."

"Great entrepreneurs absorb the hit, move on and become stronger," he explained. What he can't stand is somebody who has never run a business telling him that they are worth a million dollars.

"They have no idea what it takes to be successful," O'Leary said. "I generally don't invest in them, no matter how good the idea is."

3. Understand the pros and cons of crowdfunding.

Shark Tank investors tend to pass on crowdfunded campaigns because they aren't a reliable marker for success. "It's great that crowdfunding offers another form of financing for entrepreneurs, but don't rely on it to sell your company," O'Leary explains.

Instead, he says he's more interested in products that have customer reviews and feedback.

4. Know when to pull the plug.

According to O'Leary, "There's a simple rule to determine when it's time to shut your startup: three years."

"If you can't make money after 36 months, and there's no path to making money, it was a hobby, not a business. You have to take it behind the barn and shoot it," he says.

It's hard to know which ideas will thrive and which will fall short. On Shark Tank, O'Leary considers seven to 15 deals a year, with an eye toward creating a broad portfolio. Then he works with his chosen entrepreneurs to help them through the trials and tribulations of growth, knowing that not all of them are going to make it.

"As an investor, you have to know when to cut your losses," O'Leary said. "That is why, when I look back at my losers, I don't dwell on them."

With a total of 33 private companies, O'Leary simply can't afford to second guess his investment portfolio. Instead, he rolls with the punches.

Instead of getting caught up the day-to-day drama, he focuses on the bigger picture: "Am I backing the right entrepreneur, the best product or service? Is it a growing market?"

"What I have learned over a long period of time is that the ones you think are going to be huge successes often fizzle out, and the ones you thought would be mediocre end up being monster hits," O'Leary said. "You simply can't know, so I generally tend to invest in broad-spectrum opportunities."

6. Have interests beyond business.

"There is a yin and yang to business, but don't forget the arts," O'Leary said. He follows his own advice by pursuing one of his favorite pastimes: photography. In fact, on the day we spoke, O'Leary was in the process of preparing for the South Hampton Art Show, where he displayed a series of photographs. The profits went to support teenage entrepreneurs through the Perry J. Cohen Foundation.

O'Leary said he's a better businessman because he spends a portion of his day working with the arts. It gives his life balance and allows him to express a side of himself that is different from the one he presents in the boardroom.

"Combining both sides makes you more powerful," he said.

"The real benefit behind getting on Shark Tank is that it takes your customer acquisition costs to zero. The biggest downfall for most startups is the cost of acquiring customers," O'Leary explained. "The show is an incredible platform to tap into users and potential customers."

He gave the example of Wicked Good Cupcakes, who went on Shark Tank four years ago, and is now about to sell its millionth cupcake. "What they really did is utilize the eight to 10 million viewers watching them every week," O'Leary said.

"Of course, that means standing out from 100,000 applicants Shark Tank had this year."

This column was originally published on Entrepreneur.com on August 4, 2016.