They call him the master: Kevork Krikor Kazanjian. A legend in Middle Eastern percussion circles, Kevork, as he is simply known, is an Armenian-Lebanese who makes the best Arabic percussion instruments in the world. 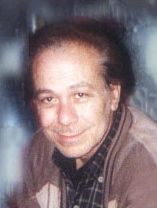 There's hardly a Middle Eastern percussionist who hasn't heard of his instruments or desired one. Not surprisingly, they are very hard to come by. Kevork is an artisan instrument maker -- a perfectionist who personally fine-tunes every aspect of every instrument he makes, a lonely workaholic who works with the precision of a Swiss watchmaker. He only produces a handful of instruments a month, and the demand for them far outstrips that.

The only instrument that Kevork doesn't manufacture from scratch is the tabla, a goblet shaped drum whose body was traditionally made of baked clay but is now made of cast aluminum. Instead, Kevork imports raw tabla parts from Egypt and customizes them to create a highly precise and tunable instrument. He also makes a variety of tunable frame drums fitted with replaceable plastic or animal skins. But his most coveted instrument is by far the riq, also called the Egyptian or the Arabic Tambourine, a small, hand-held frame drum with cymbals.

Traditional riqs were made of a round wood frame with fish skin glued to one side. These sounded great but were very susceptible to moisture, which could loosen their tuning to the point where they were unplayable. Many riq makers tried to solve that problem by using a nylon skin pulled over the wood frame with a thin metal frame and five large bolts. Although they solved the tuning problem, these riqs were heavy and very cumbersome to play.

What Kevork managed to do was create a tunable riq with replaceable skins while hiding the tuning screws inside the wood frame, thereby creating the Rolls Royce of riqs. Its looks, sound quality, ergonomics, precision and features have never been surpassed, and only recently came to be imitated, albeit imperfectly. Kevork managed to achieve that level of quality by being simultaneously an expert in woodworking, metal welding, brass cymbal hammering and natural skin treatment. The instrument is an amazingly tight compromise between shape, weight and sound. Close imitations have failed to achieve the same exact sound quality even by copying all of its dimensions.

I was fortunate to meet Kevork and buy my first riq from him 12 years ago. Since then we have stayed in touch, and I have pretty much visited him on every trip I made to Lebanon, either to buy a new riq for a friend, or simply to pay my respects and hang out. But this trip, I wanted something different. Although Kevork's riqs come in many designs and can be ornamented with mother of pearl chips, the classic stained walnut model has been the same for decades, except for slight variations in the hue of the brown wood stain.

I called him and told him my idea: I wanted a radically different color, something unique, something shocking yet dignified on stage, something noticeable yet immediately acceptable. I wanted a bright red riq -- the color of a Ferrari! When the master heard that, he started screaming at the other end of the phone. "You want what? A red riq? There are no red percussion instruments," he emphatically declared. I proceeded to send him pictures of a red drum set, red congas and bongos, a red tambourine, immediately followed by a picture of a red Ferrari. After five minutes of pleading, he agreed to try it. A week before I arrived to Lebanon, he sent me a picture of the riq wood frame after it was painted red. The result was stunning -- red worked really well. 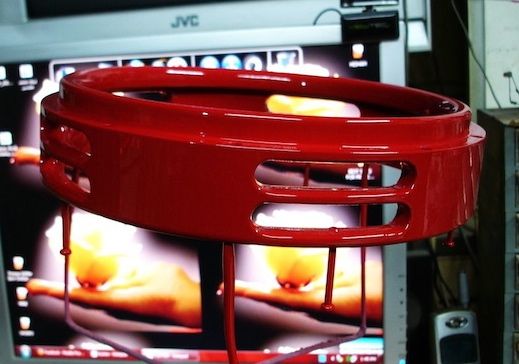 I called him as soon as I landed in Beirut and worked out a time to visit him. Kevork lives and works in a house in Sinn El-Fil, a neighborhood not too far from the main Armenian concentration in the Beirut suburb of Bourj Hammoud. His workshop looks like a cross between an underground bunker and a mad scientist's laboratory. Beside the assortment of wood and metal working tools and the various percussion instrument parts, he has several CCTV cameras pointed at the street outside his door at various angles, plus a few of his personal inventions like a door buzzer that activates a telephone that automatically calls him, or a machine used to rotate riq frames while they are sprayed with polyurethane that he adapted from old antenna rotators from the 1980s.

When I arrived after dark it took me several attempts before I could locate his house again. I hadn't visited for a few years, and the roads had slightly changed. After a very warm welcome, I was beyond anxious to acquire the new riq. But the red riq wasn't even assembled; it was lying in pieces, beautiful as it was. Perhaps I shouldn't have been surprised. Kevork is so backed up with orders that he has a habit of prioritizing customers that he sees in person over ones that call or email him. He actually needs a warm body standing before him in order to finish the job. Surely enough, when I complained that I had ordered this riq months ago and I came all the way from New York to get it, he said: "What's your hurry? We haven't hung out yet!"

My second visit was not any more successful. Kevork, who tends to work nights and sleep during the day, had overslept after a long work session and missed my desperate phone calls, parked outside his house in the pouring rain, even after repeatedly knocking on his door and tapping on his windows. Relief came at the third trip, scheduled between visits to my relatives and shopping trips to get local cooking ingredients. This time the red Kevork riq was ready. It looked splendid, deep red as we had designed it, bearing a thin gold line and the golden Kevork logo in Arabic, with the last "K" cleverly drawn as a G-clef. 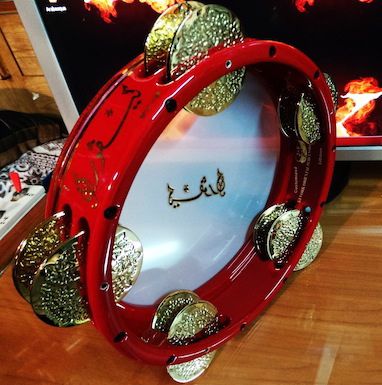 I was so humbled that he had indulged me and built me a custom made instrument. He had fitted it with a transparent synthetic skin and fine-tuned it, using his own background as an Arabic music percussionist. Needless to say, the sound of the red riq didn't disappoint either. After paying for my instrument and saying my goodbyes, I walked out with what my percussionist friend Karim Nagi called "the Ferrariq!" 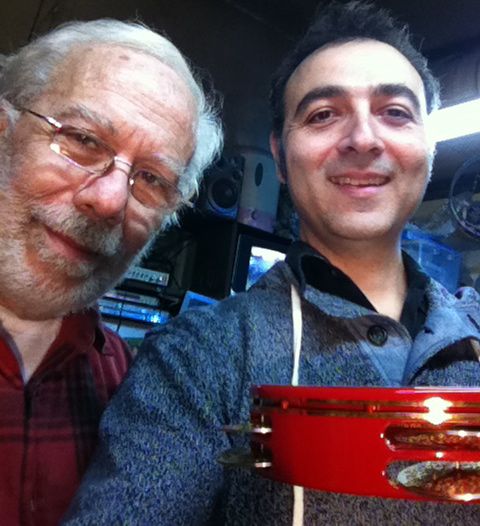