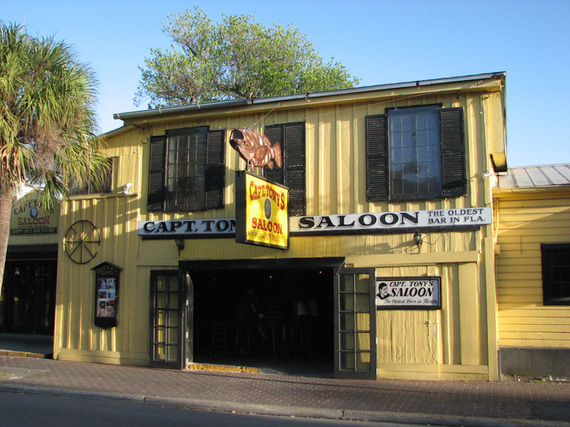 Ernest Hemingway, Truman Capote, Shel Silverstein, Tennessee Williams and the Mayor of Margaritaville himself, Jimmy Buffet, have all enjoyed a drink (or 8) at Captain Tony's Saloon in Key West, Fla. What the tourist guide books often fail to note when promoting the saloon is the fact that it was established in 1851 as an icehouse and morgue.

Not only was the building used as Key West's first morgue, it was also the location of the infamous "Hanging Tree," which was responsible for hanging 16 pirates and one woman who had stabbed her husband and two children to death. Ghost hunters claim she haunts the bar to this day. She's known as the "Lady in Blue" (named after both the blue dress she wore when she chopped up her family, and the color her skin turned as she died). 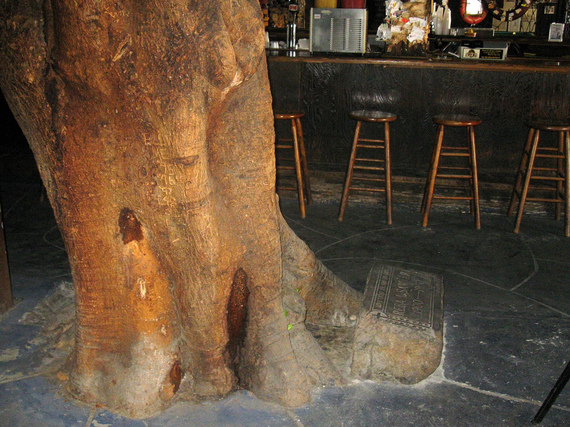 In 1865 a massive hurricane hit Key West, and corpses were sent sprawling:

"All of the bodies were missing after the hurricane hit, except one," said Joe Faber, the current owner of Captain Tony's Saloon. "According to some old Conchs that I spoke with when researching the history, they found one body that was near the outside of the building, which is now the inside of the building where the pool room is. They never found the others, so what the Bahamian people did is decide to make that an unofficial grave site. They buried the body they found, built a wall around the area, and put bottles full of holy water in the wall." -- Jeff Belanger 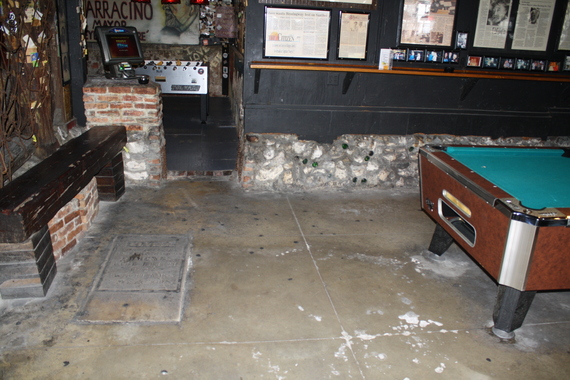 At the turn of the century, the building was used as a cigar factory and then as a speakeasy, where men and women gambled and cavorted, fast and loose. Of course it was also a bootleg distributor of rum. Sloppy Joe's opened in 1933 and became a favorite eatery of Ernest Hemingway.

In 1938, Josie Russell, in a dispute with the landlord of 428 Greene Street over a $1 rent increase and a clause in the lease stating that all fixtures must stay if he ended the lease, decided to move the entire bar in the middle of the night (including the fixtures) a half block away to the corner of Duval and Greene Street. During the move, Hemingway insisted on possession of the urinal. He said, "His hard earned money paid for it." The urinal can still be viewed at the Hemingway House where it remains as a cat trough.

In 1940, the building was leased to Morgan Bird, who opened a gay saloon, called the Duval Club. The Navy prohibited sailors from frequenting the club. Unfortunately, without the revenue of sailors on leave the club shut down. Then, in 1958 Captain Tony bought the bar.

Born Anthony Tarracino in Elizabeth, N.J., "Captain Tony's" father was a bootlegger who had dropped out of ninth grade to sell booze during Prohibition. Sadly, Captain Tony's dad was a degenerate gambler who ultimate got involved with the New Jersey Mafia. In 1947, Tony was "beaten and left for dead at the Newark city dump," after which he moved to Key West, in 1948.

Captain Tony's pub expanded throughout the twentieth century. Besides building around the hanging tree, owners expanded the saloon to include a billiards room, building over and around the wall containing holy water. In the 1980s, while taking up the old plywood flooring, the bones from between eight and fifteen bodies were discovered. A skeletal reminder of the find hangs behind the bar today. Also unearthed was the grave marker of a young woman named Elvira, which is now exposed in the cement next to a pool table. -- Jeff Belanger

Captain Tony's is an iconic divey beach bar named after a modern maritime icon who was once a fishing boat captain gunrunner, gambler, and Mayor of Key West. The late, great, captain Tony. Father to 13 children by five wives, Captain Tony served the U.S. government as a gunrunner during the Bay of Pigs.

"All you need in this life is a tremendous sex drive and a great ego, brains don't mean a shit." -- Captain Tony. 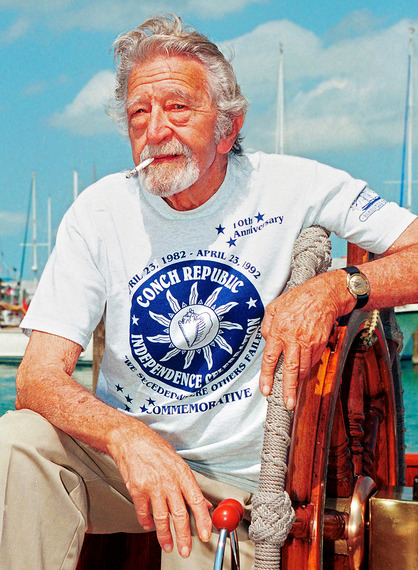 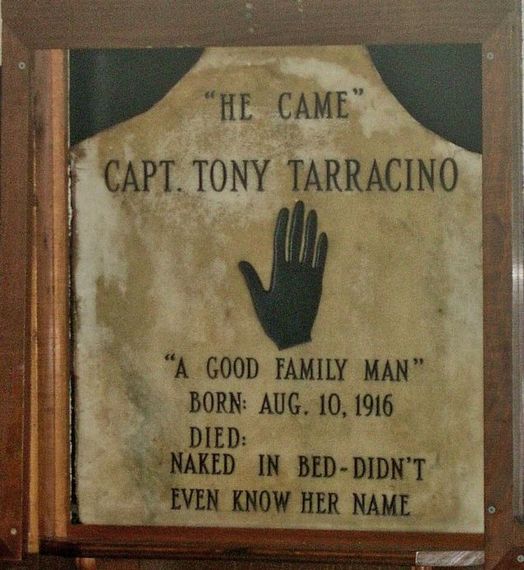 And for good measure, here's the Jimmy Buffett song, "The Last Mango in Paris" about our American hero, Captain Tony: