TransCanada, the Calgary-based energy conglomerate behind the proposed Keystone XL pipeline project, has often stumbled in trying to win the hearts and minds of Americans.

It has, for example, infuriated property-rights advocates from Montana to Texas by aggressively invoking eminent domain when landowners in the pipeline's planned path refuse to grant easement. The company's mixed record of leaky pipelines, too, has not helped to turn skeptics into supporters of its 2,000-mile Keystone project, which would ship a heavily processed (and environmentally suspect) petroleum product from Alberta to the Gulf Coast.

But if executives at TransCanada felt they had successfully weathered the worst of what has been a uniquely acrimonious, five-year battle with environmentalists and other critics of the project -- a feeling surely augmented by recent suggestions that President Barack Obama was likely to approve the contentious pipeline -- events of the last week or so will have curbed their enthusiasm.

On Monday afternoon, a coalition of environmental and public interest groups fired off a letter to Secretary of State John Kerry and the State Department's Inspector General, Harold Geisel, demanding a probe into the agency's handling of its widely criticized environmental review of the proposed project. Chief among the charges: that the third-party contractor hired to conduct the analysis, Environmental Resources Management, effectively lied when asked by the State Department, in a screening questionnaire, whether it had any potential conflicts of interest.

The State Department, meanwhile, was lax in overlooking the discrepancy, the groups said.

An example: "Within the past three years, have you (or your organization) had a direct or indirect relationship (financial, organizational, contractual or otherwise) with any business entity that could be affected in any way by the proposed work?" the State Department questionnaire asked. An ERM project manager checked the box marked "No" -- and then added "ERM has no existing contract or working relationship with TransCanada."

That last bit may well be true, but the authors of Monday's letter to the State Department suggest that ERM's "No" is demonstrably false, rendering the added disclaimer an ungainly act of misdirection. Indeed, as revealed by Mother Jones late last month, it turns out that several of the ERM analysts who chipped in on the Keystone XL review appear to have worked on past projects involving TransCanada, as well as performing consulting work under contract for several other fossil fuel companies. 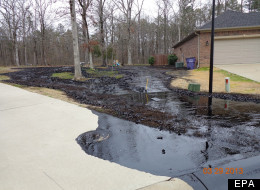 Nothing focuses the popular mind like photographs of gurgling black sludge sliding across the foot of a driveway.
Whether or not this is remarkable -- or even grounds for disqualifying ERM -- is difficult to say. Virtually any assemblage of archaeologists, geologists, wildlife experts, air quality analysts and other reviewers with the necessary and concomitant expertise in assessing oil and gas pipeline projects would likely have résumés that include, well, oil and gas pipeline consulting. But the State Department and ERM did themselves -- and by extension, TransCanada -- no favors by hiding the work histories of ERM staff in a heavily and, it turns out,
clumsily redacted
document released as part of the long-anticipated environmental review.

As MoJo demonstrated, peeling away the redactions proved a technologically trivial affair, and thus a scandal was born.

Representatives of ERM referred all of my questions on this front to the State Department, which refused to discuss the matter on the record -- a habit that, by the by, does little to improve the agency's image relative to the Keystone permitting process, which it must oversee because the pipeline would cross a U.S. border.

(The State Department came under withering criticism for an earlier iteration of its environmental review, and for maintaining what critics considered unduly "cozy" relationships with a TransCanada lobbyist.)

"We do not have any reason to believe that ERM answered any of the questions regarding conflicts inaccurately," the agency said in a cloak-and-dagger email that it insisted be attributed only to "a State Department official." The email continued: "Based on a thorough consideration of all of the information presented, including the work histories of team members, the Department concluded that ERM has no financial or other interest in the outcome of the project that would constitute a conflict of interest."

It's unclear whether that will satisfy those calling for an investigation, but the skirmish unfolds against the backdrop of another mess that, while not of TransCanada's making, could well turn the tide of public opinion against the pipeline.

It wasn't, after all, one of the many conduits already built by TransCanada that burst open at the end of last month, sending tens of thousands of gallons of noxious, chemical-laden petroleum cascading across the front (and back) lawns of middle America. The honor this time belongs to Exxon, which is scrambling alongside federal environmental officials to contain the damage even as the first lawsuits begin to land.

But in all other respects, Exxon's mess is TransCanada's public relations nightmare -- not least because the stuff that oozed into an otherwise quiet subdivision in Mayflower, Ark., a slice of suburbia a half-hour north of Little Rock that abuts a pair of wildlife refuges, is the very same product that Keystone's backers want to deliver across 1,800 miles of the American heartland to refineries in southeast Texas.

For years, activists opposed to the project have described the energy-intensive and environmentally destructive methods of mining this thick, gooey substance technically known as bitumen; how it must be processed and diluted with a chemical cocktail to get it to flow through pipelines in the first place; and how the threat of a major spill of the material was too grave to consider.

And yet for all their efforts, the Keystone XL pipeline project appeared to have broad public support among Americans, with as many as two-thirds favoring its construction, according to a Pew survey conducted in mid-March. Oil industry supporters of TransCanada's project welcomed the news: "The Pew poll is a reflection of the growing public support for KXL," Sabrina Fang, a spokeswoman for the American Petroleum Institute, told The Christian Science Monitor last Wednesday. "The majority of the American people want KXL to be built because it will create thousands of jobs and enhance our nation's energy security."

But then, nothing focuses the popular mind like raw footage and photographs of gurgling black sludge sliding across the foot of a driveway basketball hoop or choking curbside sewer systems, and it comes as no surprise that opponents of the Keystone project are now eagerly using the rupture of Exxon's pipeline, called Pegasus, to increase pressure on federal regulators to extend the public comment period on the State Department's review.

"The disaster in Mayflower demonstrates, once again, the severity of these risks and the need to evaluate them," the coalition of environmental groups, spearheaded by the Sierra Club, wrote in a letter addressed to the State Department on Monday. "The public, the State Department, and other federal agencies involved in the Keystone XL decision must know what went wrong with the Pegasus pipeline before they can evaluate whether similar accidents are likely to occur on the much larger Keystone XL."

Reached by email, TransCanada spokesman Shawn Howard provided a lengthy statement highlighting the comparative safety of pipelines over other modes of transporting oil and gas -- including trucks and trains -- and what the company describes as the high-tech safety features that will be included in the proposed Keystone project. "This is an unfortunate circumstance and demonstrates the pipeline industry must continue to focus on the safe, reliable operation of its energy infrastructure," the company said, referring to the Exxon spill. "Americans consume 15 million barrels of oil every day to heat their homes, cook their food and start their cars. Oil and petroleum products are part of our daily lives and most North Americans clearly understand this."

The Sierra Club and its fellow activists are seeking to add another 75 days for additional deliberations on that point and whether the State Department's Keystone review provides an accurate portrayal of the project's risks and rewards.

As it stands -- and it's hard to know whether the timing is brilliant stagecraft or just an exquisitely awkward turn of providence -- the official comment period on State's Keystone XL review ends just two weeks from today: on Earth Day 2013.