If President Barack Obama approves the Keystone XL project, the 875-mile pipeline extension from the oil sands in Alberta, Canada, through Nebraska could create an array of environmental problems. It could also provide jobs for some of the 12 million unemployed Americans -- hundreds of thousands of them -- according to some supporters of the project and TransCanada, the company behind it.

The long and partisan debate over the project has at times been reduced to a matter of balancing environmental and economic concerns. House Speaker John Boehner (R-Ohio) recently urged Obama "to stand up for middle-class jobs" and approve the pipeline, and some Republican leaders have argued that it could have a significant impact on unemployment.

"Completion of the Keystone XL Pipeline extension will bring over 1.4 million barrels of oil per day into U.S. markets and create more than 100,000 American jobs," House Energy and Commerce Chairman Fred Upton (R-Mich.) said in 2011.

TransCanada commissioned a study in 2010 that says the pipeline will create 118,935 jobs (not permanent ones, but what the study calls "person-years of employment," or one year of work for one person), with 20,000 openings in construction and manufacturing. Non-construction jobs would include any increased business activity in areas affected by the temporary construction work. The same study ventured to estimate that the pipeline could create 553,235 permanent jobs of any sort due to increased U.S. oil supply, under a unique scenario with a peak cost of oil.

These figures have long been criticized for being inflated and misleading, and a new report the State Department released last week predicts that permanent job gains could be much, much smaller. The report, which also downplays environmental concerns, estimates that the project could support 42,100 jobs over a construction period of one to two years -- with 3,900 jobs in construction itself -- and says that after those jobs are no longer needed, only 35 permanent positions for maintenance and inspections might remain.

Here are some of the numbers that have been floated during the Keystone XL debate, confusing jargon included: 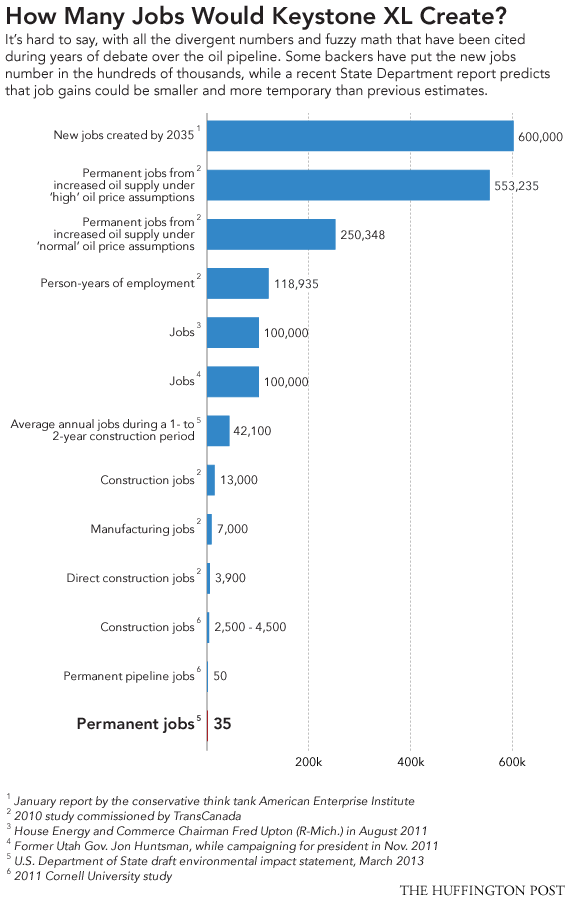