Barely a week after President Obama rejected the contentious Keystone XL pipeline proposal and his relationship with environmentalists reached a "high water mark," protesters once again took to the streets of Washington, D.C.

On Wednesday, environmentalists staged a rally to "blow the whistle" on members of Congress who have received contributions from the fossil fuel industry.

According to a press release, the protest, which was held on the West Lawn of the U.S. Capitol Building, was led by 500 individuals dressed as referees, a marching band, Senator Bernie Sanders and representatives of several environmental groups.

Bill McKibben, 350.org founder and a leader of Wednesday's rally, said in the press release:

We're going to 'blow the whistle' on the corruption that passes for business as usual on Capitol Hill, where people take money from companies whose interests they vote on. If this happened at the Super Bowl it would be a national scandal; we've got to make sure it’s seen that way in our political life too.

He said, "The most profitable corporations in the world do not need subsidies from the American people. We need to end Big Oil subsidies and tax breaks, and I'm going to introduce legislation to do it," according to a 350.org press release.

According to Reuters, as of Monday, rally organizers had not announced specific lawmakers they planned to target.

Along with 350.org, the rally was organized by Greenpeace, the Natural Resources Defense Council and Sierra Club, among others.

Last week, the Obama administration announced that it would not approve a permit for TransCanada to build the Keystone XL pipeline from Alberta's oil sands deposits to refineries along the Gulf Coast of Texas. Obama stressed that his decision was centered around Republican insistence on a "rushed and arbitrary deadline" to approve the pipeline.

Protests against the Keystone pipeline in front of the White House in August and November resulted in over one thousand arrests and helped raise awareness for the environmentalists' cause. For a look back at these and other protests against the pipeline, click here.

Below, check out images from the January 24 congressional protest in Washington, D.C. 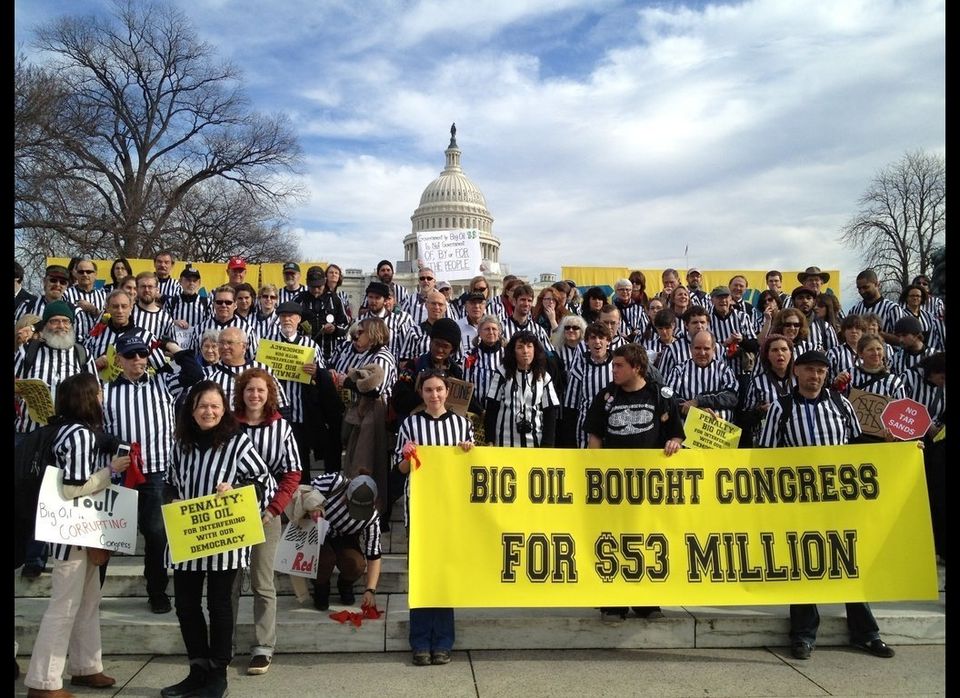