KFC's new deep-fried boneless chicken offering, Original Recipe Boneless, is set to hit stores nationwide on Sunday. But, lucky for you, The Huffington Post managed to get its hands on a bucket of the stuff ahead of schedule.

Before we get down to the nitty gritty of whether or not we liked it, an admission: As far as fast food goes, we HuffPost editors like KFC. At KFC, we know what we're getting -- we trust that we're eating chicken breast, because, well, it looks like a chicken breast. At McDonald's, which sells curiously-shaped chicken nuggets cut from a rolled-out mash, the conclusion isn't forgone. 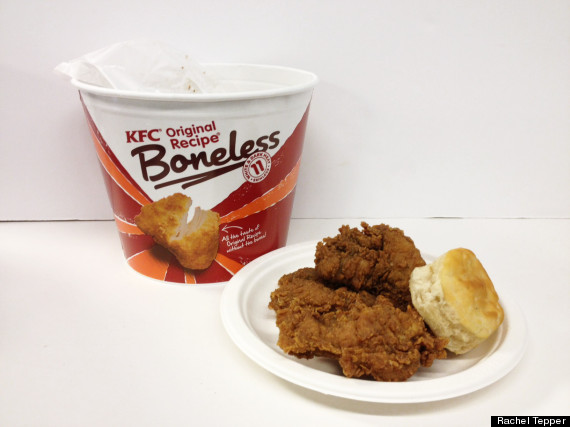 As its name suggests, pieces of KFC's Original Recipe Boneless are devoid of those bones that give KFC's bone-in chicken the illusion of being more closely connected to the food chain. The pieces come in white or dark meat varieties and the meat is filleted off the bone in one long strip.

It's available in the chain's $4.99 meal deal, which includes two pieces of chicken, a side, a biscuit and a drink, as well as in a $14.99 bucket with four pieces of boneless and six pieces of bone-in chicken. The boneless chicken won't cost more than the regular fried chicken.

Here are our thoughts:

If you're a fan of chicken tenders, you're also in luck. These are glorified, giant chicken tenders, and some HuffPost editors liked being spared the hassle of negotiating troublesome bones and sinew. "This is very American, to take out the work," mused one. You can eat Original Recipe Boneless with a knife and fork, as several of us did.

If you're not a fan of KFC's Original Recipe, you probably shouldn't have bothered walking into a KFC. The flavoring in this boneless chicken is just as salty as its bone-in counterpart, and it's just as likely to make you clutch your stomach and groan if you consume more than two pieces in one sitting.

Then there's the issue of the bones. Without them, pieces of Original Recipe Boneless seemed less greasy -- but that wasn't a good thing for some editors. "Here is the truth: there is a reason that chickens have bones," one wrote. "There is a reason that we cook meat on a bone. It adds flavor [and] moisture, two things sorely lacking in this boneless chicken."

If you like fast-food chicken fingers or nuggets, try out Original Recipe Boneless. At least with these, no mash is involved. But if you want a two-handed, three-napkin experience (in which you feel like you're actually consuming something that once squawked), stick with bone-in fried chicken. At KFC and everywhere else.