If this thing tastes like chicken, it's for a braver soul to find out.

A California man made waves on Facebook after posting a photo of an oddly shaped cutlet that he claims to have received in a three-piece meal from a Los Angeles KFC on Friday. As of Thursday afternoon, the image had been shared more than 121,000 times.

Devorise Dixon, 25, said on Facebook that he bit into the unsavory-looking morsel and found it had a rubbery texture. He then claimed to have taken it back to the KFC restaurant where he'd purchased it. The manager told Dixon the fried lump was a rat, apologized and offered him a free meal, Dixon told a local radio show, the Randy Economy Show, June 13.

WENT BACK TO KFC YESTERDAY AND SPOKE TO THE MANAGER SHE SAID IT IS A RAT AND APOLOGIZED, IT'S TIME FOR A LAWYER!!! BESAFE DON'T EAT FAST FOOD !!!

But KFC says Dixon is misleading the public and that the object in question is just a piece of breaded chicken.

"A customer has made a serious claim against KFC and refuses to cooperate in the investigation," KFC said in a statement sent to The Huffington Post. "Based on this, and the fact that he refuses to allow anyone to see the product, we are left to believe that he intended to deceive the public with this hoax and we are considering all options."

The company said it made several attempts to get in touch with him, but he refused to talk directly or through an attorney.

"Our chicken tenders often vary in size and shape and this just happened to be an oddly shaped one," KFC spokesman Rodrigo Coronel told HuffPost in an email. He emailed the following image, which zooms in on a photo from Dixon's Instagram account. 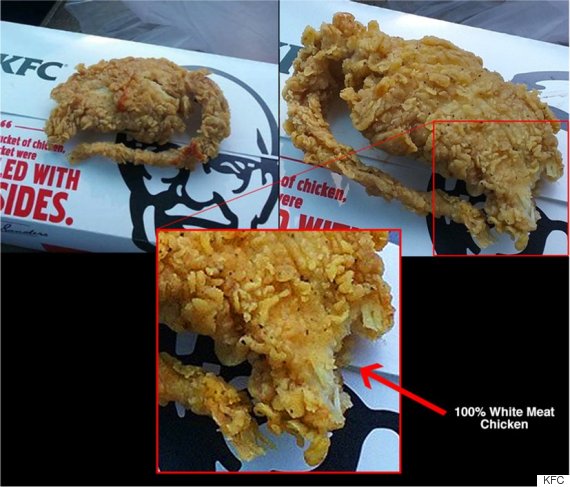 Coronel insisted that the hoax was not a viral marketing campaign and said the company is taking the allegations very seriously.