An image posted to Reddit over the weekend shows what just may be one KFC patron's worst meal ever.

Reddit user boneriffic12 uploaded a picture of what appears to be an undercooked chicken sandwich, along with the following description:

Fried Chicken #FAIL. My friend ordered a chicken burger from KFC & it came back raw. Yes he ate that bite that's missing. 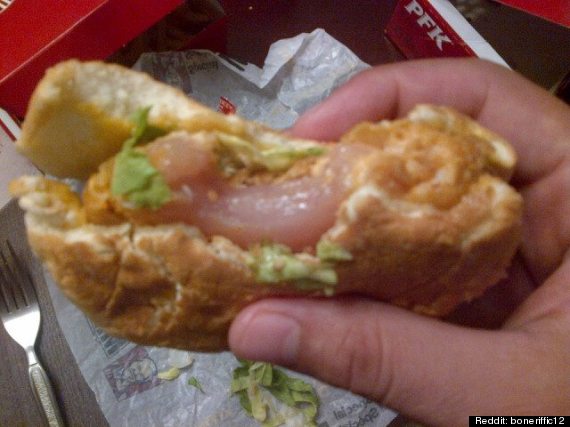 In the comments, the user explains that that sandwich in question was purchased in Ontario, Canada, where the information on the packing is written in both French and English. PFK stands for "Poulet frit a la Kentucky."

Undercooked chicken is particularly troubling because, more so than other meats, it carries a high risk of salmonella contamination.

KFC has found itself in hot water over salmonella-tainted chicken before. Last week, a KFC in Conroe, Texas reportedly served spoiled chicken that was 16 days old -- six days more than KFC policy allows. The smell allegedly made one worker vomit.

In April, the fast food chain was ordered to pay $8.3 million to the family of an Australian girl who was left severely brain damaged and in a wheelchair after eating a chicken meal that resulted in salmonella poisoning.