Paradigm Shifters is a series of interviews with a select group of women and men from eclectic walks of life. It will highlight unspoken, real-life insights on how they have been able to turn weakness into strength. A naked soul point of view of how their breakdowns were really a preparation for breakthroughs. They are your quintessential paradigm shifters; internal shifts converted into genuine change.
Everything I have ever done has been focused on this underlying theme of shifting the paradigm because, "What we think determines what we feel and what we feel determines what we do." Hence, why Empowered by You takes lingerie, which has traditionally been seen merely as a tool of seduction and redirected that energy as a tool of empowerment.
I hope from these stories you will look at your own situations, struggles and accomplishments through a different lens. At the very least you will be more equipped with real life tools to change your own paradigm. At the end of the day, we are our own Alchemist turning the silver we were born with into the gold we are destined to become. 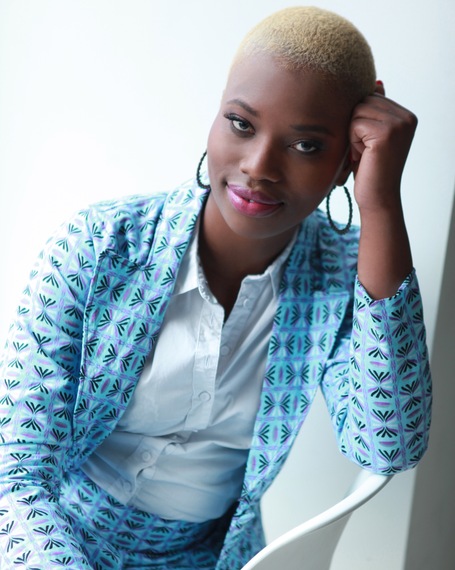 How did your pregnancy go?
I was told that I was infertile because of the FGM. Finding out that I was pregnant was a big surprise, but a welcome surprise. Due to the FGM, my pregnancy was considered high risk. If the baby didn't kick for about an hour I would rush to the hospital. Keeping the baby alive for nine months was stressful, as was dealing with a medical system that didn't have that much knowledge about my condition. But in the end I had a beautiful baby boy.

What is your definition of empowerment?
My definition of empowerment is having full autonomy over my body. Whether you have a child, whether you don't have a child, what you wear, what you don't wear, it is your body. Women should live life according to the rules they make and dance to their own music. That is the way I live my life, the music I hear is not the music everybody hears. Society places so much pressure on who we should be. We need to take a step back and ask ourselves how we want to live our lives. Although it's scary to go against the norm, it's worth it. There is nothing more empowering than living life the way you want to.

Where does the idea come from that FGM makes a girl a woman?
No one has been able to pinpoint FGM's origin specifically, but I have an idea that it started with a crazy man who was threatened by his wife's clitoris. The clitoris is powerful. Maybe he felt like the clitoris was competing with his penis. FGM has its roots in male masculinity, and women have been viewed as needing to be controlled. When you are a little girl you don't have a sense of sexuality, but at that age we are seen as a threat. To ensure that we never become a sexual being, they mutilate children. You are not a woman at five or six; yet, these are the ages that FGM is done. All FGM does is destroy your sense of womanhood and punish you for being a girl.

What is your relationship been like with your mother after you've become an active spokeswoman for FGM?
Daughters and mothers have complicated relationships. When you throw something like FGM in the mix it gets very complicated. I can compliment my mother on the things she did well--she's a strong, intelligent woman. Regarding FGM, I understand why my mother felt like she needed to perform it on me. In her generation FGM was the norm. However, regardless of what her intentions were, they don't undo the consequences. I believe in this quote that says, "intention doesn't negate responsibility." She held me down while someone cut away a part of me, all in the name of culture. She refuses to apologize and is also opposed to me speaking out against FGM. I've been doing so since I was thirteen. Speaking up enables me to take back that power I lost. I've channeled my anger into making sure that FGM doesn't happen to another little girl.

You've had problems with police protecting you against an abusive ex husband. You quote them telling you that it was up to you to protect yourself. How do you propose shifting the blame from the abused onto the abusers?
The grassroots of the cause of gender inequality is how we raise our children. When a little boy pushes a little girl we teach our girls that he "likes" her. When our little girls cry it's okay; when our little boys cry, we tell them that they have to be "strong." From a young age we are setting up gender roles. Men feel the need to prove this idea of masculinity and women are told they need to be submissive. We need to change the way we're raising our children. Take my son for example, he's only seventeen months right now but he ran up to a girl and hugged her. I pulled him off and told him, "It's not okay to go hug someone without their permission." We need to build this foundation where women's bodies are theirs. We need to teach boys and girls that physical acts of force are not the way to show affection. We need call out sexist behavior. We can't pretend it's not happening or else we will remain where we are.

What lessons do you hope to teach your son Samuel Williams Jr.?
It is very important to me that he respects women. Mama refused to raise a son that is not a feminist. I sound crazy talking so seriously to a little child. But at some point, he will understand that he needs to value women. I'm not going the raise him to be brute and unfeeling. I want him to learn compassion. There is so much I want to teach him but respect is the most important value. If I can instill the idea in him that women are strong and people to be loved, then he will be a wonderful man one day. I can't control all of that, but I can lay the foundation.

Breakdown to breakthrough moment?
It was when I had been assaulted and was at the hospital. To this day I can't hear in one ear and have chronic back pain. I called my mother and the first thing she asked was if my husband was okay and what I had done to him. I had reached a crossroads in my life where my two identities were incompatible. Where I am from, I was taught if your husband is not happy, you are the problem. In my culture it's not violence: it's discipline. But as an African-Australian women I lived in a society where violence against women was called for what it was. The tipping point for me was looking forward. I thought, "If I one day I have a daughter, what will I say to her about this moment in my life?" It all became clear. I refused to one day have to tell my daughter that my life wasn't valuable. I made the choice to press charges and to say, "No, that will not be a part of my culture." We can define our own culture, instead of being controlled by it. Yes, I was scared. I was scared I would be ostracized from my community, which happened, and disowned from my mother, which happened. But through this experience I finally found my purpose in this world.

What do you want your legacy to be?
I want my pain to have been used as a tool for change. I've experienced war, FGM, and domestic violence. Instead of letting those conquer me, I've turned the narrative. When I die, hopefully I will leave behind little girls who have been saved from FGM and women who take a stand. If nothing else, my life will be a source of comfort and strength. I want them to say, "She came, she spoke, she was loud, and she conquered." I am proof that it doesn't matter what happens to you, it's what you choose to do with it that defines you.

Khadija is a force to be reckoned with. I was inspired by her bravery and conviction in the face of adversity, when she had every right to be a victim. She will definitely leave behind better lives for girls and women.