Donald Trump clearly thought he could bully the Khan family. After all, they are Muslim immigrants and Trump has made demonizing Muslims and immigrants the cornerstone of his successful run to the GOP presidential nomination. And to be candid, deep down I thought he might get away with it, given that standing up for Muslims in today's political climate is risky, to say the least.

But we were both wrong -- me happily, Trump not so much. What we both discovered was that the Khans were not viewed by our fellow Americans as Muslims, immigrants, or in any way as foreigners. Rather, they were viewed as Americans who had lost a son while fighting heroically for the United States of America.

What the Khan family did with their speech last Thursday night at the Democratic National Convention was make a point that I suspect many Americans were unaware of until then: Muslim Americans have not only served in our military, but they have also made the ultimate sacrifice for our nation. 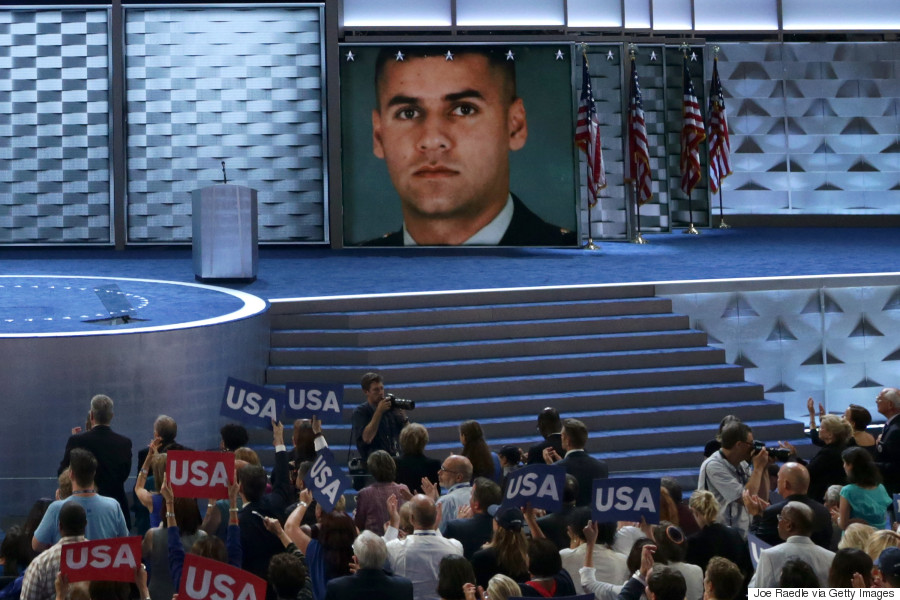 An image of Capt. Humayun Khan is displayed on a screen as his father Khizr Khan delivers remarks at the Democratic National Convention July 28, 2016. (Joe Raedle/Getty Images)

The Khan family -- Khizr, Ghazala and their slain son U.S. Capt. Humayun S.M. Khan -- put a face to American Muslims who had fought for our nation. They brought forth a discussion that many Americans had not been aware of: the idea of Muslim soldiers, who contrary to popular knowledge, have fought for this country before its formation. In fact, Muslims fought alongside George Washington in the Revolutionary War. One soldier, for instance, Peter Buckminster, is believed to have been Muslim and was the one who killed British Major Gen. John Pitcairn at the Battle of Bunker Hill.

Indeed, Muslim Americans have served in our military ever since, including in the War of 1812, the Civil War on the side of the Union, World War II and the Iraq and Afghanistan wars. There are nearly 6,000 Muslim Americans -- if not more -- serving in the U.S. military today. And Captain Khan, who was posthumously awarded the Bronze Star for heroic service, is not the only Muslim buried with honors in Arlington National Cemetery.

This story was largely unheard until the Khan's speech Thursday night. Now, even after the convention has concluded, it has received even more attention after Trump despicably mocked this Gold Star family. Trump first maligned Mrs. Khan for not speaking at the DNC -- as if that had any bearing on the sacrifice of the Khan family or the heroism of Captain Khan. Then, when she responded in an op-ed to explain why she hadn't said anything at the convention, he lashed out again. Trump tweeted this week, this time claiming Khan was out to attack him:

Mr. Khan, who does not know me, viciously attacked me from the stage of the DNC and is now all over T.V. doing the same - Nice!

The response to Trump's antics were truly heartening, especially given that Muslims have been demonized by Trump throughout his campaign with relatively minor pushback. In this case, though, it was different. Despite Trump's direct plea to Republican members of Congress to stand with him and issue statements in his defense, none were forthcoming. In fact, we saw just the opposite reaction. Republican members of Congress, such as Senate Majority Leader Mitch McConnell (R-Ky.), praised Khan as, "an American hero." Senator John McCain (R-Ariz.), a former prisoner of war during the Vietnam War who Trump ridiculed last year for getting "caught" by the enemy, went further stating, "In recent days, Donald Trump disparaged a fallen soldier's parents. ... I hope Americans understand that the remarks do not represent the views of our Republican Party, its officers, or candidates." Other Republicans voiced similar sentiments, such as Senator Kelly Ayotte (R-N.H.), who forcefully responded, "I am appalled that Donald Trump would disparage [the Khans] and that he had the gall to compare his own sacrifices to those of a Gold Star family."

Soon nonpartisan groups began to stand up for the Khan family. On Monday, Brian Duffy, who serves as the head of the Veterans of Foreign Wars, an organization with nearly 1.7 million, stated bluntly, "the VFW will not tolerate anyone berating a Gold Star family member for exercising his or her right of speech or expression." He added powerfully, "There are certain sacrosanct subjects that no amount of wordsmithing can repair once crossed." 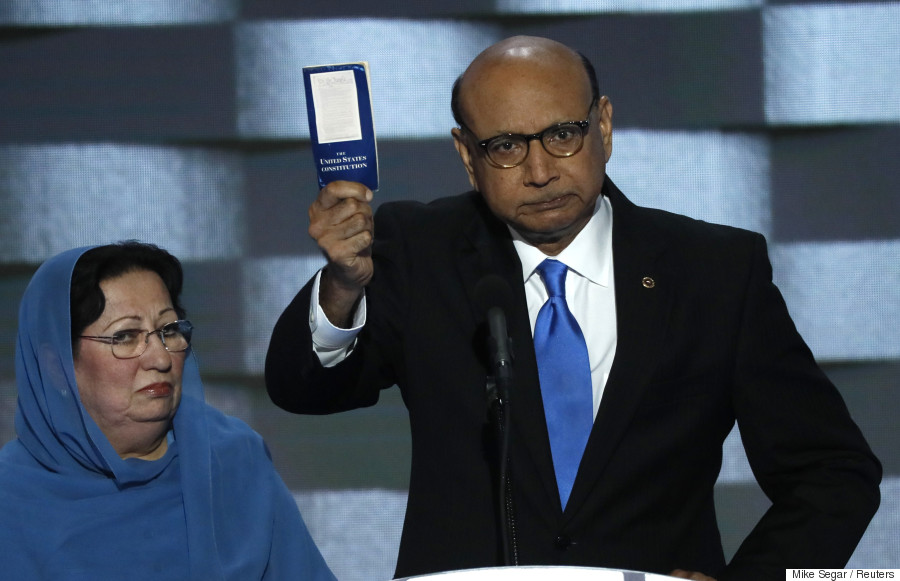 Khizr Khan offers to loan his copy of the Constitution to Donald Trump, as he speaks at the Democratic National Convention in Philadelphia, July 28, 2016. (Reuters/Mike Segar)

This diverse group of Americans who defended the sacrifice of these immigrant parents were truly embracing the very ideals expressed on the Great Seal of the United States: "E Pluribus Unum," which means "Out of many, one." This motto, coined by Thomas Jefferson, Benjamin Franklin and John Adams, sums up what the experiment of America was intended to be -- a country where people of diverse backgrounds can come together and become Americans. Despite the efforts of Trump to demean the Khan family, they have still accomplished something truly remarkable. They made it clear to all that you can be both a proud American and a proud Muslim, and there is absolutely no contradiction between the two. Captain Khan may have died on June 8, 2004 in Iraq while protecting the troops under his command, but he is still fighting for America against those who attack our values. And I'm happy to report that Captain Khan is winning that war.