I have never been disappointed by a program at the National Arts Club on Gramercy Park in New York City, and Dr. James P. Delgado's recent lecture was no exception. Jim is fascinating, which should come as no surprise. For one, he directs Maritime Heritage at the National Marine Sanctuaries of the National Oceanic & Atmospheric Administration. Then, he is the former host of The Sea Hunters. Finally, he has just written Khubilai Khan's Lost Fleet: In Search of a Legendary Armada. 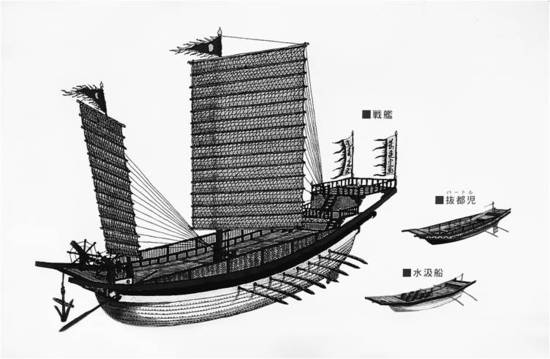 Preliminary reconstruction of one of Khubilai Khan's lost ships. The result of generations of Chinese engineering and development, these were the world's most advanced warships duringthe Medieval period. He squandered his naval advantage with poorly executed attacks on Japan, Vietnam, and Java. Photo courtesy of KOSUWA & the Takashima Board of Education.

Michele A.F. Kidwell, Chair of the Archaeology Committee of the Club, welcomed its president O. Aldon James, Jr. as well as the president of the Archaeological Institute of America, Dr. Elizabeth Bartman. Michele's description of the National Arts Club bears repeating: An unparalleled bastion of civilization and culture in our Country. Michele then introduced the speaker and author of Khubilai Khan's Lost Fleet:

Since the 1970s, Japanese archaeologists have searched the waters off their southeast coast for remains of the warships sent in 1274 and 1281 by Mongol Emperor Khubilai Khan to conquer their island. Lost both in battle and wrecked in 1281 by a violent storm which Japanese legend insists was a heavenly mandated divine wind known as the "kamikaze." these vessels were lost to history and largely forgotten until the events of World War II and the revival of the story of the kamikaze.

Finds of relics from Khan's flotilla created world headlines in the 1970s, but the actual eluded discovery. In 2000, Japanese archaeologists finally located the broken wreck of one of the Khan's fleet. The following year, James Delgado became the first western archaeologist to join the Japanese team as they excavated and recovered the remains, which included armor, weapons, personal items, and evidence of massive, sophisticated armada with catapults which fired explosive bombs.

By way of introduction, Jim Delgado writes on why underwater archeology and history stir him so greatly:

My life has been defined by a quest to learn about the past and share it. As a maritime archaeologist who works around the globe, I've spent decades in the fascinating world of underwater exploration...

What keeps me fired up with a passion for the past are the connections I make with everyday people whose lives have been irrevocably changed by their interactions with the sea, including some of history's greatest disasters.

No matter how many times I dive, how many shipwrecks I see and touch, the awe, the excitement and the thrill of discovery are always there.

The story of the Mongol invasion of Japan is unforgettable. One giant armada attacked from China, a second from Korea. Although 700 years ago, the naval might was impressive: hundreds of gigantic ships with thousands of warriors. Yet, a "divine wind" - the Kamikaze - blew into the Mongol fleets, destroying them. Those sailor-soldiers that didn't drown from the weight of their armor were cut down on the beach by Japanese samurai. This happened twice, in 1274 and 1281. Japan was never attacked again until the U.S. tried to enter its waters around 1850 and then bombed it at the end of WWII. 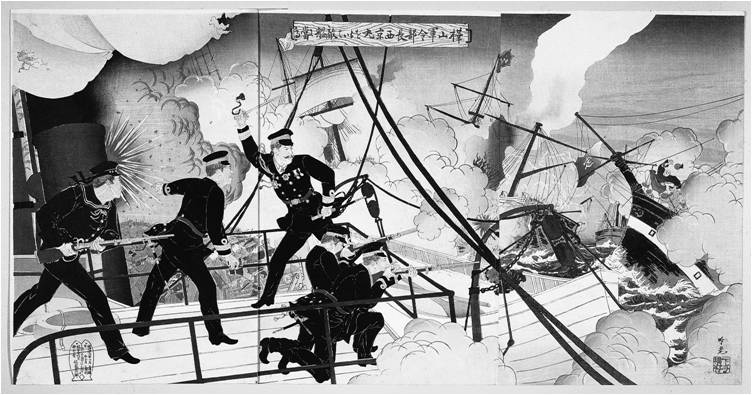 Inspired by a mythic history and a sense of divinely controlled destiny, Japan emerged as a major military power in the late nineteenth century. Memories of the Mongol/Chinese invasions played a role. This contemporary woodblock print depicts the Imperial Japanese Navy smashing a Chinese fleet in the Sino-Japanese War of 1894. (Author's collection)

Sitting through Jim's fascinating talk, I realized I remember my East Asian Studies classes from Waseda University as if they were yesterday. In China, it was the Yüan period (1279-1368), in Japan the Kamakura period (1192-1333), and in Korea the Kōryo Dynasty (935-1392). The Mongol attack was against the southern Japan - near the city of Fukuoka then known as "Hakata," which I have visited.

Jim knows his craft - unearthing underwater history and making it available to the public. Expecting a dry, Harvard Yard presentation, I was delighted to come face-to-face with the popular National Geographic TV host who is gifted enough to paint for us one of the most significant historical episodes of all" the invasion of Japan by Chinese and Koran navies under the great Mongol leader Khubilai Khan.

After the speech, Michele Kidwell kindly invited me to join the author for dinner in the Club's historic dining room. I was struck by how knowledgeable yet approachable he is.

Later, as I read his book, I was pleased that Jim writes so well, on such a human level. He makes history come alive because, as he points out, history and archeology are about telling the stories of real lives, which by definition are fascinating. 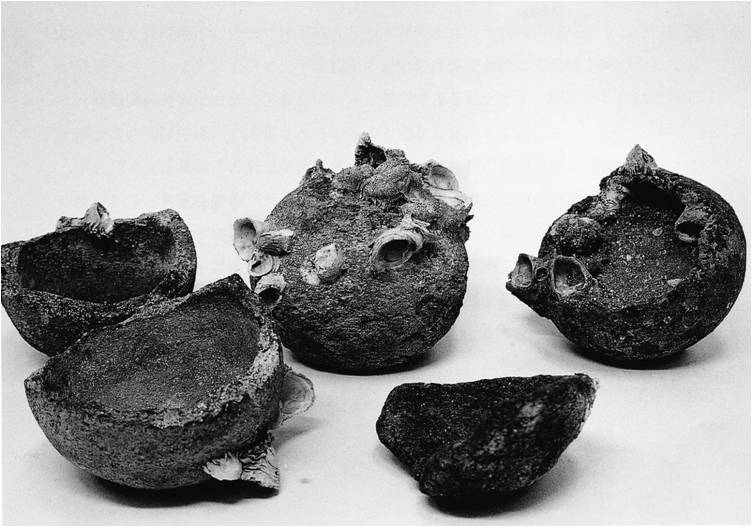 These ceramic shells, some intact, are the world's oldest known seagoing bombs. Known as 'tetsubau,' they were Chinese inventions that gave the Khan's navy atechnological advantage. Courtesy of KOSUWA and Takashima Board of Education.

For example, he writes about one of his dives off the coast of Kyushu:

What may be lying beneath me is the grave of a drowned Mongol soldier, lying face down, surrounded by his arms and armor, buried in the thick mud for seven centuries.

Then (my colleague) Mitsu swims up to an overturned bowl, and with the thumb of his glove gently wipes it free of silt to reveal writing. He writes me a message on his diver's slate, a translation: "Wang, Commander of IOO."

Is this the rice bowl of the drowned soldier? Was he not a Mongol, but Chinese? There are many questions that fill my head, but as I hover, I think of Wang, whoever he was.

Did he ever think that he would end up here, sealed in cold, thick mud for centuries? Did his family ever wonder what actually happened to him, when he never came back from battle those centuries ago? Did his father and mother, or his wife and children, stand by the shore and look out, wondering if one day he might just come home?

Floating in the water what may well be Commander Wang's grave, I am reminded of how history is, at the most basic, the story of individuals caught up in it all. 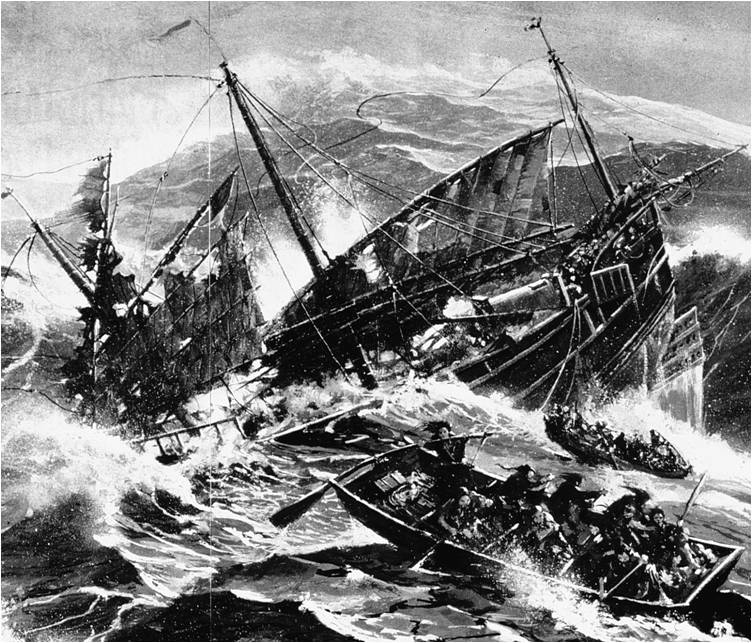 One of the thousands of prints reproduced from Isho Yada's The Prayer is Heard and the Divine Tempest Blows (ca. 1895) depicting the destruction of Khubilai Khan's fleet by the divine wind, or Kamikaze. The originals hang in the Fukuoka at the Mongol Invasion Museum. Photo courtesy Tora Mozai collection.

Jim Delgado is a brilliant public speaker, a charming dinner companion, and, very happily, a particularly gifted writer. This delightful and informative book not only recounts the exploits of Khubilai Khan, but provides the reader a colorful narrative of pan-Asian history.

One particularly fascinating theme is how advanced China was at that time, 700 years ago:

The ships that the Europeans used to explore, conquer and colonialize in the fiftieth and sixteenth centuries ranged from Columbus's flagship Santa Maria, which measured around eight-six feet, to Francis Drake's famous Golden Hinde, which was about seventy feet long.

The Vikings steered their vessels with long oars attached to the sides of their hulls. Chinese ships of the period had rudders attached to their sterns - an Eastern innovation that took centuries to reach Europe.

In many ways, it took Europe and America until the eighteen and nineteenth centuries to build ships as sophisticated as the ones the Chinese were sailing nearly a thousand years ago. 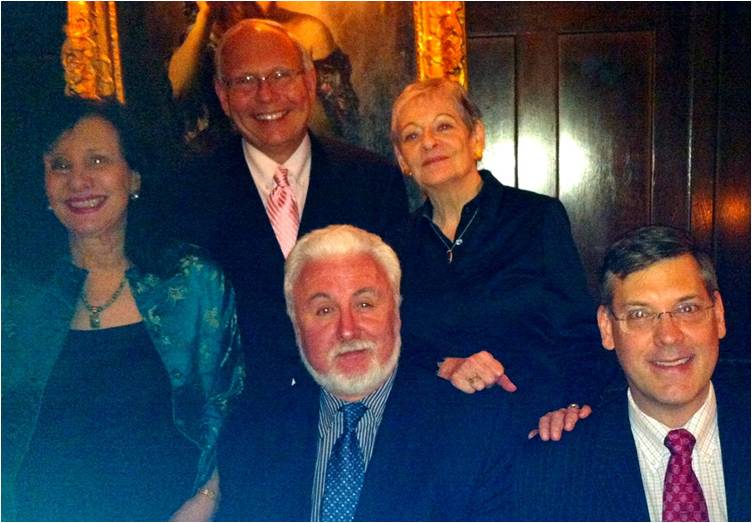 Or, on Khubilai Kahn's decision to attach both Russia and China simultaneously:

This two-front war would stretch the Mongol forces over eight thousand miles - a feat that no other army would achieve until the Second World War.

In another passage, Jim contrasts the weapons of that era:

The warrior's principal weapon was a composite bow made of horn and wood and bound with sinew. The Mongolian bow was stronger and offered greater punch and distance coverage than any European bow of its time - even the vaunted English longbow. A Mongolian bow could loose a shaft that flew for 350 yards - a hundred yards further than an arrow launched from an English bow. 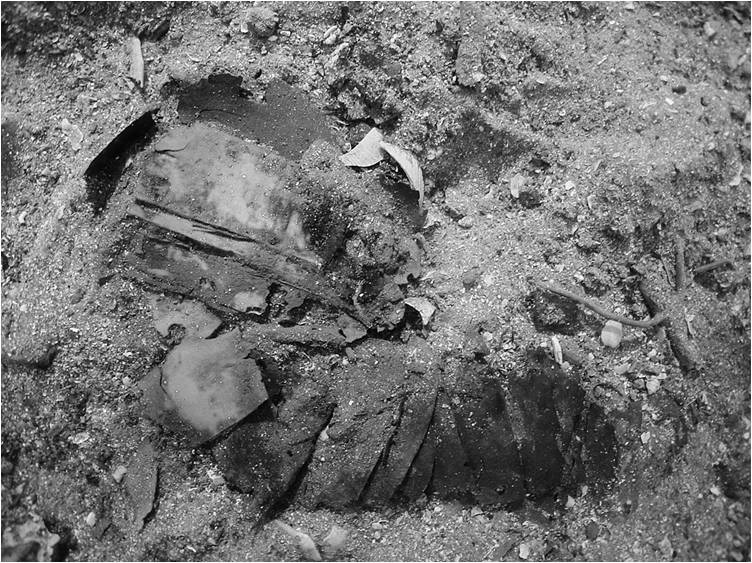 Fragments of the lamellar leather armor from a drowned soldier lie exposed on the seabed during excavation. Photo courtesy of KOSUWA and the Takashima Board of Education.

Tour the ancient shrines of Japan, walk through timeless hills and beaches shrouded with fog or rain, and your mind can wander back through the centuries. Listen intently to the words of the priests, watch the worshippers praying or spend hours of intense conversation with an octogenarian veteran of a global conflict in which he pledged to die in a suicide attack in the name of a legendary storm, and you can feel how the past and present are separated by precious little. The events of yesterday continue through time, like the ripples from a stone tossed into a pond. 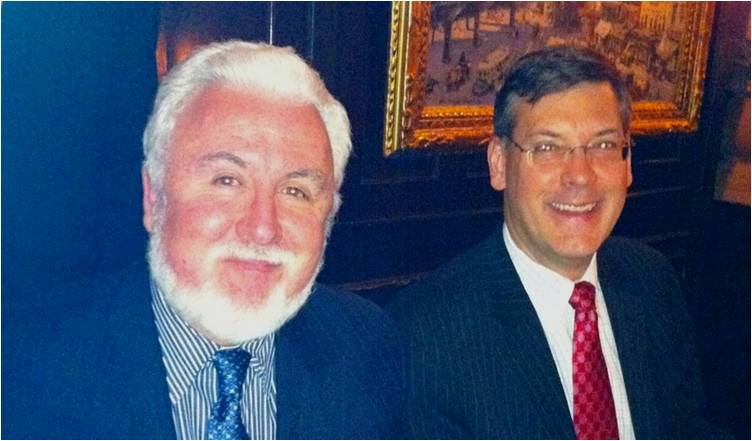 Jim Delgado and I enjoyed diner at The National Arts Club following his presentation.Photo courtesy of Arlene Schutz.

I was also interested to hear something good about Khubilai Khan. Jim writes:

Genghis Khan brought in a rule of law, abolished kidnapping and torture, and instituted a policy of diplomatic immunity for envoys from other rulers. He noted that no one was above the law, something that applied to rulers as much as it did to the ruled. Genghis also extended free trade and religious freedom, and he ordered a writing system for the previously illiterate Mongolians.

Having studies my own family history more intensely than most, I realize that Commodore Mathew Perry was not the first U.S. Naval Commander to enter to enter Tokyo (Edo) Bay. In an attempt to open up Japan to trade with the U.S., Commodore James Biddle was, in 1846 - years before Perry. Stephen B. Luce, then only a lowly midshipman, was with him. The American naval fleet was chased away by the Japanese. Luce, however, went on to become Rear Admiral and founded the U.S. Naval War College at Newport.

The question remains: Was it the Japanese forces that chased the Great Khan's forces away from Japan - twice - or was it just natural typhoons that destroyed Khan's armadas? After sitting through his lecture, hearing him speak over dinner, and then reading his fascinating book, I realize that Jim Delgado knows the tea leaves can be read either way.

Please note that the presentation on Japan described above was given prior to the earthquake and tsunami. Our hearts go out to those affected by this terrible tragedy.