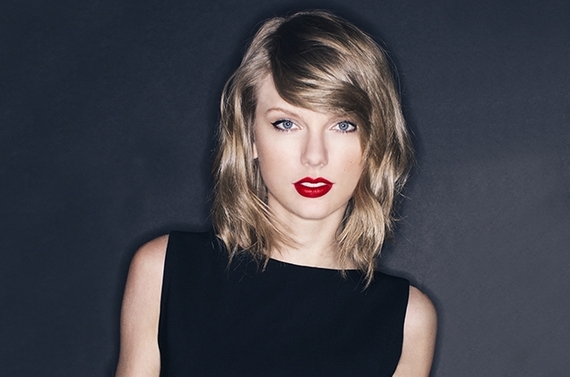 Listen to any of the songs on '1989', the new album from Taylor Swift, and you'll notice that Swift doesn't just sing those lyrics - she acts them. There are nuances and inflections that she milks with the precision of an actress.

That scope for drama, and irony, and occasional comedy tells us that there are things going on inside the words of the songs that are worth a closer look.

Swift uses metaphor and simile, as do many songwriters, but what makes her current lyrics interesting are three unusual techniques specifically designed to make things sound weird -- to mix things up.

"'Cause darling I'm a nightmare, dressed like a day-dream"

It's my favorite line from 'Blank Space'. How often do you see the words nightmare and daydream so close together. They're a clash. They don't belong in the same sentence.

Here's another one, this time from 'I Wish You Would':

Little tiny band-aids -- good for covering a paper-cut, but worthless when set against a bullet-hole!

And finally, another personal favorite, once again from 'Blank Space':

We'll take this way too far,
It will leave you breathless,
Or with a nasty scar.

Those first two lines contain gushing, emotional language - 'way too far' and 'breathless'. When she describes that scar, we expect Swift to use similarly rushing words such as 'livid' or 'vicious' or 'lethal'. But no - it's a 'nasty' scar.

That's how you'd describe an injury to a small boy! "Ohhhh... what a nasty cut. Where's that bandaid?"

Mixing-up phrases like this creates surprise in your audience, and surprises always grab attention.

Cliches are tired, over-used old phrases. Pop songs are packed with them. You can tell it's a cliche when people can complete the entire phrase having heard only the first few words.

You probably came up with some variant on 'Built to last' and 'Fade away'. Taylor's versions though give us '....built to fall apart.' and 'Fade into view.' She's taking cliches and giving them unexpected endings. Those endings, spike our interest.

It's a simple technique to copy. Find a list of cliches online, and play with the endings.

For example, could a lazy person be described as 'Up at the crack of lunchtime'? Or how about describing a tight-fisted person as having 'Both feet planted firmly on their wallet'?

People born to extreme privilege are described as having been 'born with a silver spoon in their mouths'. When you get used to playing with cliches, you soon realise that maybe the mouth isn't the only location where that spoon could have been planted, and a whole new descriptive option suddenly becomes available to you.

Swift's final musical twist takes our senses and churns them up. It has us hearing colors, or seeing sounds, as in:

It's called synesthesia, and takes a little getting used but is well worth the effort. The next time you want to describe a sound for example, ask yourself what color the sound might have been. If you want to describe a smell, ask what yourself texture it had. If describing a texture, wonder what flavor you would associate with it. When you start to play with your senses in this way then your descriptive power increases tremendously.

Over the months to come as tracks from '1989' continue to be released, you're guaranteed to hear people humming the tunes. If you enjoy playing with words and wonderful ways to arrange them though, then spend some time with Taylor Swift's lyrics as well.