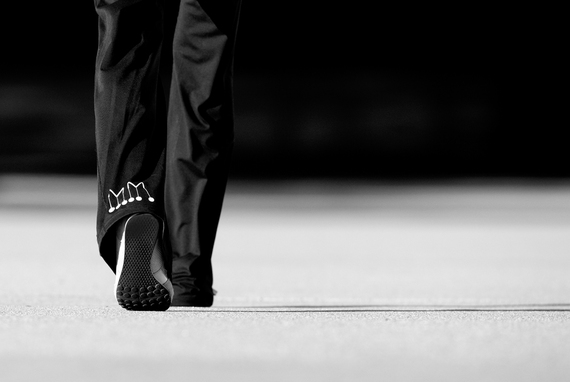 If your therapy sessions are beginning to feel like nothing more than talk, talk talk, you might want to add a little walk, walk, walk.

I've looked at life through the lens of an athlete since I was 4. I still remember my first tennis lesson, and the jolt of energy that ran through me the second the racquet strings touched the ball. At the end of a day at tennis camp I'd be sweaty, exhausted... and completely calm. During downtime at home I would blissfully pass the hours hitting a nerf ball against my bedroom wall or seeing how many shots I could rally off the tiny patch of stucco above the garage door. At the time, I had no idea the value of this kind of mindless repetitive action -- I just knew it didn't allow my brain to run off in bad directions. Early in life, I realized that physical activity not only fueled my energy, but it also chilled me out.

Years later, after a long competitive tennis career, both as a collegiate player and coach, I ended up in graduate school, eager to delve deeper into my fascination with human behavior. At Northwestern I wrote 20-page papers and studied every theory known to man about why we feel and behave the way we do and ultimately reached my goal of becoming a therapist. But along the way I lost sight of that simple but profound truth I learned as a kid: Moving your body can calm your mind. By the time the typical client picks up the phone and calls a therapist they're already stuck and hoping that therapist will give them a nudge to action. Or maybe even a shove, because modern people not only want results, they want them yesterday. The problem is, traditional talk therapy often creates the exact opposite dynamic. You discuss patterns from the past until you become lost in your own story. So much energy is spent on trying to figure out "why I've ended up this way," there's no game plan for how to put changes into action. Endless analysis keeps you stuck in a mental and verbal spiral, creating more paralysis.

I remember the day it hit me. It was your typical 10-degree windy winter day in Chicago, and I was sitting in my pimped-out office with a client, surrounded by the perfect Eames chairs, a cozy security blanket, two perfectly inconspicuous placed clocks, when all of a sudden I began to almost suffocate from the stuffy, confining, oxygenless-air. My client was right in the middle of a story she'd told me 20 times before, sitting with her shoulders hunched in defeat and her foot twitching with angst and all of a sudden I heard myself blurting, "Grab your coat. We're going for a walk."

In that moment I knew with every cell inside of me that it wasn't "talk therapy" but "walk and talk therapy" that had the power to unlock human potential. It was creative, natural, invigorating, normalizing, authentic, active... and it was easy. All we had to do was put one foot in front of another. Walking does lots of great things at once. There's the calorie burn, the endorphin spike, the sensory bliss of being in nature. You're constantly passing new scenery, which helps you think creatively. Your self-consciousness dissipates with each step. Walking also encourages people to come up with their own solutions, because it turns the therapist and client into a team of equals rather than them looking at me sitting there in the almighty chair. We were talking human to human, footstep to footstep, in the open air of possibilities.

I noticed that when my clients were walking through the park they might be telling me about painful events like a divorce or job loss, but somehow they still felt good. Physiology was working in their favor, and they didn't seem so stuck in their story. The solutions you come to while in motion are different than the ones you think of while sitting still. They tend to be more real world, and -- maybe because they're born out of action -- easier to bring into action. I've walked and talked with thousands of people, both at Miraval and with clients across the country as part of the work I do with my company, Mind in Motion. Each walk has been a catalyst for change, whether the client is an over stressed CEO, an empty nest couple seeking to reconnect, or someone trying to understand the deeper issues behind their weight problems or struggling to let go of a painful divorce.

I encourage my clients to bring in physical activity when they need to have a challenging discussion, whether it's a personal relationship or a business meeting. Sure, there's a time and a place for stillness -- I wouldn't tell someone who had just suffered the death of a loved one to get up and walk it out -- but it's amazing how many problems can be solved through the combination of nature, motion, and human connection.

This isn't about working out, which is a different type of activity with a different goal, but rather about sustaining a level of movement that's steady and calming. Everyone talks about physical toning, but we need emotional toning as well, a way to give the mind a rest from busywork and raise our body-centered energy. In talk therapy, the law of inertia works against us -- the longer we sit there feeling stuck, the more stuck we get. But in walk and talk therapy, the law of inertia begins to work in our favor, for motion, once created, sustains itself.

Our bodies instinctively know how to self-heal, and if we give them half a chance, they can heal our minds as well. So lace up your shoes, kick the therapy couch to the curb, and let the momentum of a walk carry you forward into the change you crave.

Join Leigh's therapeutic MOVEMENT OF MOVEMENT. Start the conversation and tell us where your favorite spot is to walk things out?

More:
healthy living motivationHealthFitness and Exercisepsychiatry
Newsletter Sign Up
An essential daily guide to achieving the good life
Subscribe to our lifestyle email.
Successfully Subscribed!
Realness delivered to your inbox