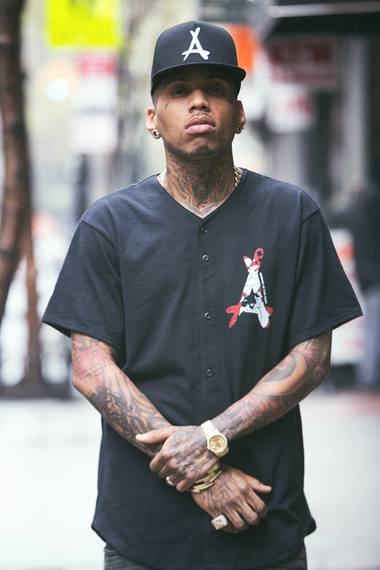 If you've been around celebrities and highly successful people in general, you find they have an aura about them. It's inexplicable but is the "it" factor that so many people talk about when trying to describe what makes someone a superstar. When I walked into Grit N Glory on a chilly Monday in New York City to interview Kid Ink, I saw that aura. The multi-platinum recording artist recently finished a 220-city tour, released a new album, is on tour again, and has been running his Alumni clothing line. I had the chance to sit down with him to learn more about him to see what things have been like for him.

When you think about Kid Ink you think someone who regularly has hits on the radio. You also may think about how he has collaborated with many of the top names in music including Chris Brown, Usher, Pusha T, Wale, and Tyga. What you may not realize is that he has had a slow and steady ascent to the top over the past five years. Starting out as an independent artist, he was selling out shows long before his major record deal with RCA. He said the change was difficult in a few ways, but has been for the better. For the album "My Own Lane" there was some adjustment, but with "Full Speed" things were much better. He said the toughest part has been getting used to the long process of approvals everything takes. But he's been patient because he understands this is their way of doing things.

On his last album some criticized Kid Ink for being too much of a pop artist. He explained that what happened with his previous album was that he spent the first week of being in the studio focusing on singles. When that time was over he handed over a couple of records to show the label, and they decided they wanted all those songs on the album. Not only that, they wanted all those songs released as singles. This time around he worked backwards making all the songs he wanted first, and keeping the singles till later.

Some artists have trouble ever getting a real radio hit in their lives. Others like Kid Ink seem to have one every time they release a song. I asked him if just making hits made him happy, or if he preferred doing things another way. On the subject he said,

"Having a hit never gets old. Hearing your record on the radio is always amazing. But I've definitely had to mix up the tracklist for my shows because if I hear the same sound too many times I can't get excited about it. And if I'm not excited I can't expect the fans to be. Before I was making songs I knew people would like. And I'm still doing that, but I also want to enjoy them. I don't want to just be a corny pop-rapper when I feel like I'm on the same level as other guys who are getting more respect as hip hop artists."

This past year Kid Ink did a tour with 220 worldwide shows. While most artists are setting up 30-40 cities tours I asked Kid Ink what made him decide to do a tour of that magnitude, and he said,

"It was the grind mode mindset I was in. If something seemed beneficial to my career I just kept saying yes. Obviously I made sure it worked with my brand, but I said yes a lot. I was definitely overworking myself. The point was to get it done, and I don't ever plan to do it again. I learned a lot I wouldn't have otherwise. That grind was necessary for me to show and prove to everyone I'm here to stay. And even though we had all those shows they were still selling out!"

According to Kid Ink there were pros and cons to doing a tour that took so much of the year away from him. It increased his fan base because people that came to his shows who weren't too familiar with him at the beginning got really into the shows by the end. But he also believes he missed out on a lot of opportunities like coming out for performances with Chris Brown and Steve Aoki. Because he was already booked he couldn't take advantage of some of those great opportunities so it was good and bad.

In all the hours we spent together I got to learn things about Kid Ink that most people never think to ask. He's a competitive person who enjoys playing video games, participating in extreme sports, and watching horror movies whenever he can. Also, because of poor food options on tour life he's recently become a pescetarian. His favorite pre-show food is tuna with cheese and crackers, and there is always some waiting at venues for him. He admits he's an adrenaline junkie as well. Recently he decided to go skydiving even though he's afraid of heights. Also, while growing up he was a laid back and shy person, which is something he's changed as his career progressed.

Many artists have never achieved the heights of success Kid Ink has in the past few years. He has toured more than most ever will, sold more records than most ever can, worked with more top names than most could even aspire to, and even started a successful clothing line in ways most could never even imagine. What is most interesting about him is that it doesn't look like he's close to stopping yet. In fact, he looks like he's just getting started. It's going to be interesting to see what he has planned because if there's one thing about Kid Ink, it's that he does everything big.