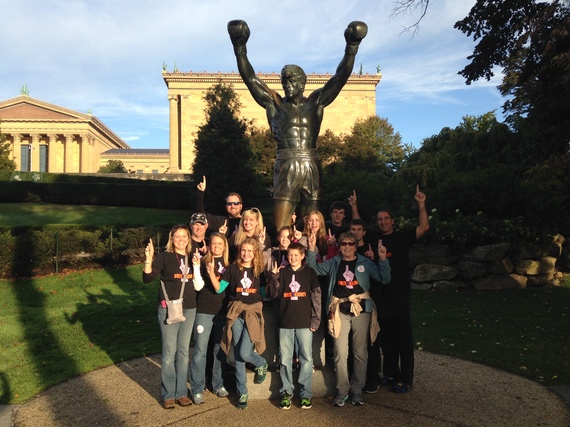 One of the great privileges of my life was being able to donate a kidney to my husband in 2012. It's an amazing feeling to be able to give someone their life back, and it hasn't hampered my lifestyle one bit. In fact, Bryan and I still to do all of the things we love, like hiking, camping and traveling, and have grown even closer since his transplant.

Another great privilege of my life is getting to know the kidney donor community. Just after our first "transplantiversary," I founded a nonprofit called Rock 1 Kidney that shares ways donors have been "rocking one kidney" since donating. The idea is to show potential kidney donors and their loved ones that people can have healthy, happy lives after donating. Maybe if we dispelled some of the unfounded fears surrounding the surgery, over 100,000 Americans wouldn't be waiting for a life-saving kidney transplant right now.

I'm constantly inspired by the stories that Rock 1 Kidney receives from kidney donors. They invariably involve compassion and strength and selflessness and love. There's Jamie, who donated a kidney to her 6-year-old daughter - seven months later, she completed the Walt Disney World Marathon while her daughter was in a cheer competition. Brandon donated to a fraternity brother, and now plays with his three sons, volunteers to teach kids about science and engineering, and goes swimming, kayaking, canoeing and snow tubing with family and friends. "The only thing I've done to change my lifestyle is to drink more water - which I recommend to everybody!" he said.

Steve's wife needed a kidney but he wasn't a match, so he joined a kidney donor chain and essentially saved two lives - he still works full time, travels and plays in a rock 'n' roll band. Brian donated to a friend, and continues to work as an athletic trainer at a major university. "I would do it over again a million times ... Most people don't even know that I had the surgery just a few months ago. Except for the guy who has a new kidney and is enjoying life with his wife and beautiful little daughter too," he shared.

Often people will go to great lengths to donate, such as losing weight to qualify as a donor. Laura lost 30 pounds in order to donate a kidney to a stranger who became a close friend - now she walks every day to stay fit and regularly donates blood. Susan spent about a year losing over 110 pounds in order to donate to her older brother. Then two years later - after 15 years of dealing with fertility issues - she became pregnant naturally and gave birth to a baby girl. "My joke to the transplant surgeon was that he should have charged double for the surgery since we got two great things out of it, a healthy brother and a wonderful daughter," she said.

Of course, there can be tremendous emotional benefits to kidney donation. Many donors form close bonds with their recipients, even if they were strangers prior to the surgery (case in point: the recent story of the woman who donated to a stranger - they're now engaged and expecting a child!). Mary, biological mom to five kids and stepmother to another five, donated to a neighbor she'd only met once, but they developed a friendship thanks to the transplant. "I feel blessed for all the wonderful laughs we have had together and those that are in our futures." On the flip side, Addie donated to her best friend, Amy, and said it's one of the best decisions she's ever made. "Seeing Amy feeling great and knowing that she can be dialysis-free brings me joy!"

Then there's Jen, who was struggling with grief and depression for months after her brother committed suicide. But when she read an article about a single mother who needed a kidney, she related as a single mom and knew she wanted to donate. "The awesome part is that Heather is doing great and giving cured my depression," Jen said. "My brother saw no other way and felt no hope. Heather and I are proof there's always hope and I can't think of a better way to honor life."

I'm sure you can see why I'm so inspired by the extraordinary, everyday heroes who rock one kidney - and these are just a few of their stories. In honor of National Kidney Month, I'd like to thank all of the kidney donors out there for spreading hope in the world. I love you! Rock on!