The first thing that happens after you get engaged is people ask two things: 1) When is the date? 2) Have you talked about having kids?

Personally, I love kids, I just never saw myself actually having them.

I babysat all throughout college, never shying away from a dirty diaper or apocalyptic naptime tantrum. Yet, whenever anyone asks ME the question, my answers range from the noncommittal "one day," to my own apocalyptic fit of "HELL NO." (Beyond the whole responsibility thing, my ass really can't get that much bigger. No really, it can't.)

I suppose I should mention that I'm biased. I have two aunts -- both very childless and both very fabulous. (No, they're not dating each other). In fact, they both have quite lovely significant others and lead free, spontaneous, new-season-Prada-wearing lives.

They are single women role models if I've ever seen them.

But then, I fell in love with a boy. And the boy asked me to marry him. And, you guessed it: That boy? He wants kids. To make matters worse, he's the type of guy that you just know will be an amazing father. (Rude.)

Well, this really left only one thing for us to do: a test run.

Since they don't have rent-a-babies yet, we lucked out with the boy's very trusting sister and his 2-year-old niece, whom we soon learned that besides being adorable, had a strong command of the English phrase "No." 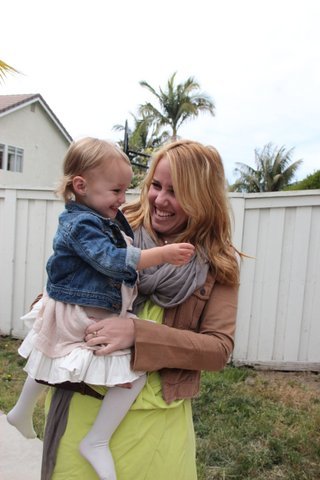 Our weekend was many things, but most of all, it was a tremendous learning lesson, which I find easiest to break down as follows...

Lesson 1: The Rubix Cube and Car Seat Were Made By the Same Person
With excitement and anticipation, the boy and I went to pick up his little niece and were immediately met with our first challenge: the car seat. While I decided to remove myself from the situation, the boy engaged in full-on, Call of Duty warfare (expletives included) with the aptly-named Britax Marathon car seat.

After minor taunting from the 2-year old -- who was quick to tell us we had no idea what we were doing and asked us to pass of the task to her grandmother (to which we dutifully surrendered) -- we were on our way. Car Seat: 1, Boy: 0.

En route home, I decided to sing Itsy Bitsy Spider. After gleeful clapping and cheers, I was asked to sing it again. And again. And again. It was as if each rendition offered something so UNIQUELY amazing that it JUST had to be repeated. By the seventh refrain, I called it quits and put on Radio Disney, which despite being the chemical-tasting saccharine of the music world, was a welcome reprieve.

Upon entering our modest one-bedroom apartment, our mini-Columbus confidently took it upon herself to not only open every cupboard, drawer and closet, but to find it in our best interests to rearrange the contents of said cupboards, finding that some items in fact were best suited for storage on the floor.

Yet, the shining moment of her bought of manifest destiny was discovering my make-up bag.

Lip glosses were by far her favorite, though she didn't discriminate against color. Rather, she preferred to blend the glosses together to achieve that perfect shade of puce. The fact that the gloss rarely made it to her lips, but rather her cheeks, nose and hair is an entirely different story all together.

Lesson 4: Candy Is The Devil

We took her to the candy store at The Grove. A sugar-induced tantrum ensued. (Shocker). She cried. We cried. She won.

Lesson 5: Is She Breathing?

After battling all day we nixed our robust evening plans of Chuckie Cheese and opted for take-out. After a relatively harmless bath time and reading a bedtime story (three times, of course), we dejectedly settled into our couch.

That is when the paranoia set in.

You hear so many tragic stories about babies rolling over in their sleep. Naturally, I started Googling this, and thus began my sleepless night. About every hour or so, I would jolt out of bed, run to the crib (you know, about three feet from the bed) and put my hand on her chest. Phew, fine. Sleep, repeat.

After being told it was time to wake up at 6:45 a.m., we went for a much-needed coffee run and decided to sip our caffeine by the complex pool so the little one could dip her toes in.

(While at this point, you parents might have seen disaster coming, we childless beings did not.)

After minutes of splashing, the niece -- deciding that this not exciting enough for her standards -- turns to me and says "Look Titi!" and takes one gallant stride forward into the pool, sans step.

The boy stands mouth agog, the niece is smiling up at me from underwater and I go in fully clothed, wallet n' all, into the water.

Upon surfacing, the boy is rolling with laughter and the niece turns to me clapping. demanding "Again?!"

Several hours and more lip gloss sessions later, we decided to take a much-deserved nap time. We all lay down together (because really, the boy and I are so exhausted, we can't move at this point).

Just as I begin to finally nod off, a soft whine fills the air. With few words to describe her discomfort, I pick her up to realize her diaper had completely overflowed, and not only has she wet the bed, but she has wet the boy.

From cheek to chest, the boy is completely covered.

My turn to roll with laughter. He did not think it was that funny.

Lesson 8: It Is Worth It

Another bath (#4 for the weekend) and a few comparatively mellow hours later, we deposited the niece back in the safe arms of her mother.

Once pulling out of the driveway, the boy and I looked at each other triumphantly and decided we totally got this.

....Just not for another five plus years or so.