When I was little, my grandmother had an apartment overlooking the East River in New York. I could sit for hours, doing nothing but look out at the passing boats. I can't recall a single time when anyone expressed concern that I was getting too much "window time."

Today, I end up writing often about the term "screen time." Truly, it's meaningless, given the myriad screens in families' lives and their widely varied uses. Every child's media profile is unique, and duration is generally less important than what content the child consumes (or creates!) as well as when, where and why.

Maybe I've been approaching it wrong, though. Would parents be less anxious to know that, often, their children are engaging in "window time"?

From the advent of film, we've worked to draw people's attention into the screen. We've all seen kids immersed in a TV show or deeply engaged by a game or app. (It's not just kids: who hasn't run into adults -- literally -- more interested in their smartphones than in watching where they're going.)

Of course, as long as there have been screens, we've used them as windows, as well. Theatrical newsreels took Americans into the heart of World War II battles; nature and travel TV transport us to places we might never otherwise see.

Now, we are seeing a new generation of mobile media applications, in which the screen is not the destination, but a pass-through. The unique affordances of smartphones and tablets -- connectivity, communication, cameras and creativity tools, among others -- empower innovative developers to pull users through and beyond the screen, facilitating learning and play in the wider world.

The most obvious and longstanding examples are Skype, Facetime or other communications programs that unite families and friends across long distances. When developers recognized that basic videoconferencing is often dull or confusing to young children, they added developmentally appropriate elements of story and co-play, like book sharing or animated storybuilding. 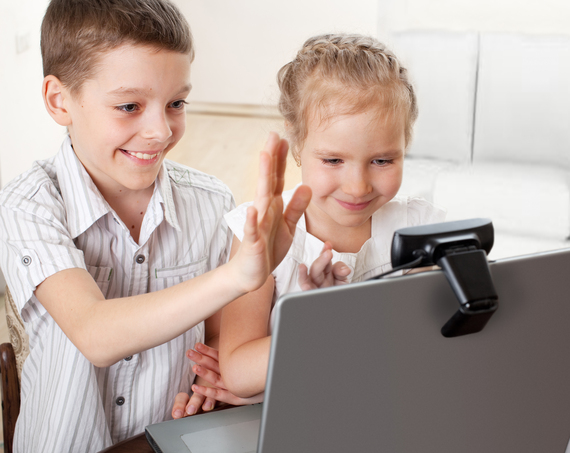 "Sandbox" construction tools -- Minecraft in particular -- use the device as an entry point to unique and infinitely buildable spaces. The crafter may appear absorbed in the screen, but really she's gazing through it, at a landscape of her own creation. There are plenty of neighbors beyond the window, sharing videos and advice: one article described Minecraft as "a world inhabited by people who share in the wonder of creation."

Other app makers are getting kids off the couch and into their surroundings by using phone or tablet cameras as a discovery and documentation tool. Adding a dollop of critical thinking, kids can help an alien fix his space ship by finding and photographing needed items, or explore their kitchens for foods on a shopping list while building word recognition.

Books have always provided a window to real and imaginary places. Today, apps enable kids to put themselves and others into the story, whether using the internal camera or unique authoring and illustrating tools.

With augmented reality, smartphones send kids on safari, searching for hidden beasts in a park or even the living room, stories linked to a particular spot, virtual geocaches or hyper-local facts and features that update as you move around. 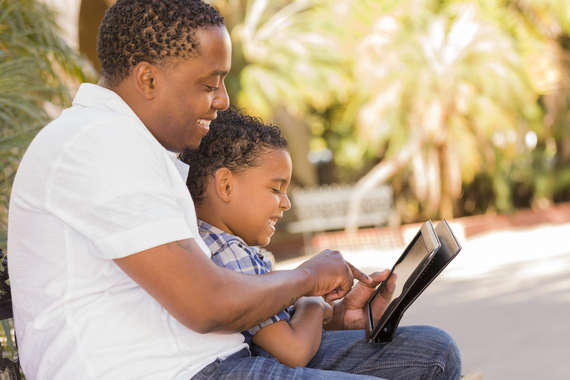 Even the microphone can open a window, challenging the child to play "hide and seek" by sneaking up silently on a monster who lives in the screen.

All these are wonderfully inventive enhancements of devices' capabilities, but in fact, no overlay or artifice is necessary: their core functions are equally valuable for children. Digital photography and video are essentially free, so why not let kids capture their own perspective on family trips or events? We know that tweens and teens' favorite websites include the biggest possible bay windows for exploring personal interests and curiosities: YouTube and Google.

None of this is a substitute for authentic moments; kids need to see, touch, smell and taste the world first-hand, too. But, digital windows can supplement or enhance real-world experiences, and they may be all that's possible for some young people.

When I moved to New York a year ago and was choosing where to live, I thought about my childhood hours of "window time" (when I wasn't wishing my family still owned that massive 16th floor riverfront apartment in mid-town). Nostalgically, I set out to find a place with a water view, and I still love watching the parade, from kayaks to cruise ships.

Every window -- architectural or electronic -- is a gateway to adventure, inquiry, fantasy, storytelling and learning. Don't assume that your child is transfixed by a screen; imagine that they're transported by a window. Spend time gazing through with them, and you'll gain a whole new perspective on their media use.