Recently we engaged in a thoughtful debate on Twitter with @theonlinemom, who provides terrific advice on technology for parents. Condensing our deep thoughts about kids, digital literacy, and parenting into 140 characters or less, our exchange went like this: 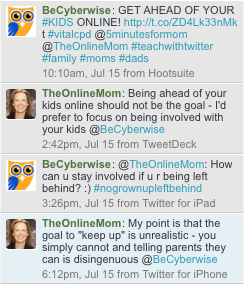 Perhaps she's right. Maybe trying to keep up with our kids and whatever it is they're doing on those social networks with the funny names -- Tinder, Yik Yak, Wanelo and more -- is unrealistic. Let alone trying to keep pace with the actual technology, with updates and improvements coming faster than you can say iNeedHelp. It's exhausting.

But there is still one realm where we are ahead of our kids, and that's in "life skills," which are sorely needed -- believe it or not -- in digital spaces. These life skills include things like kindness, respect, and thoughtfulness, and they're considered skills because in the old days, we actually learned them by observing the behavior of the adults around us. Facial expressions and voice cues helped too, they provided us with sensory feedback on the impact of a hurtful comment or action. But unfortunately both physical cues and adult role models are largely absent from the digital world kids inhabit, leaving them to rely primarily upon one another for the "social norms" of cyberspace.

Have you read Lord of the Flies?

I thought about this book and its plot line -- a group of boys stuck on an uninhabited island who try to govern themselves with disastrous results -- as I read Ann Collier's blog post in which she explains that "social norms," which she calls "super powers," are "everyday behavior based on intangibles like a family's, peer group's or community's values, habits of thought and living."

In an earlier post Collier says this about "social norms":

Their preventive and protective powers are needed more than ever in today's very social media environment. We need to be conscious of that and begin talking about their positive role in digital spaces, consciously reinforcing and promoting them in risk prevention education, awareness campaigns, ethics discussions and school and corporate culture.

I wholeheartedly agree. People, even teens, want and need "norms" because according to Oxford University professor Peyton Young, who Collier quotes, "People want to conform to the customary practices and ideals of their reference group because they will be stigmatized if they fail to do so."

Even with our marginal digital skills, kids still need and look to us as their "reference" group when it comes to their online behavior. Not only does the research tell us this, but I've listened to middle school students tell me that it hurts their feelings when their parents don't express interest in their online world. So even as they snicker at our lame attempts at uploading a selfie to Instagram, they secretly appreciate our gesture of genuine interest in their world.

One of the lessons of our in-school digital literacy, or Cyber Civics, classes asks students to write their own online social norms. These are agreements they make amongst themselves that will govern their online behavior as they start to interact with one another on social networking sites. Granted this exercise happens with just a small group of students (unfortunately), but, as they say, "if not us, then who?"

Following is a list written by one of these classes:

So thank you @theonlinemom for reminding us of the importance of staying involved with our kids. Even if keeping up with technology seems daunting, we can dust off some of those important life skills we learned -- kindness, and respect, and thoughtfulness -- and role model them in the digital world. It's too important not to.

More:
online KidsInternetSocial MediaParents
Newsletter Sign Up
Raise the kind of person you'd like to know
Subscribe to our parenting newsletter.
Successfully Subscribed!
Realness delivered to your inbox