The bond between these kids is helping them through the toughest of times.

Stella Usiak and Lucas Lowe, both 12, met during their battles with acute lymphoblastic leukemia. The two, who are currently patients at Roswell Park Cancer Institute in Buffalo, New York, have been there for each other through their journeys and formed a special bond, WGRZ reported.

The pair have small dates like eating lunch together or having quick chats. For Valentine's Day, Lucas gave Stella a ring, and has even made a sweet video about how special Stella is to him.

Stella's mother, Jennifer Usiak, told The Huffington Post that the pair is elated to simply be around one another. Even emoji-filled texts from Lucas brighten Stella's day.

"It's cute. If he sends a text and she's not feeling good it puts a smile on her face," Usiak said of Lucas' impact on her daughter. "It's like ... they are an old couple who spent a lifetime together."

According to WGRZ, the pair both went into remission at one point and relapsed later on. Both also received bone marrow transplants. Because of the couple's experiences, the mom says it's easy for them to relate to one another.

Dr. Meghan Higman of the institute's pediatric hematology and oncology program notes that it's important for kids undergoing treatment for a life-threatening illness to have strong support systems like the one seen between the couple.

"The relationship allows them to talk about and understand what’s happening and offer support to each other in ways that other kids can’t," Higman told HuffPost. Later she added, "The only person who can truly understand what a kid with cancer is going through is another child with cancer."

Higman mentioned that by having a peer who's going through a similar situation, a child is able to not only talk about treatment, but also discuss how the illness may affect other facets of life. The connection may also help improve mental health.

"For kids who have to be in hospital or going back and forth to clinics for long periods of time, they miss out on going to school, school dances, on family events. ... To have someone your own age who’s been through some of the things you’ve been through, it gives some normalcy," she explained. "It helps decrease anxiety and helps them have someone else to ... talk out their frustrations or concerns." 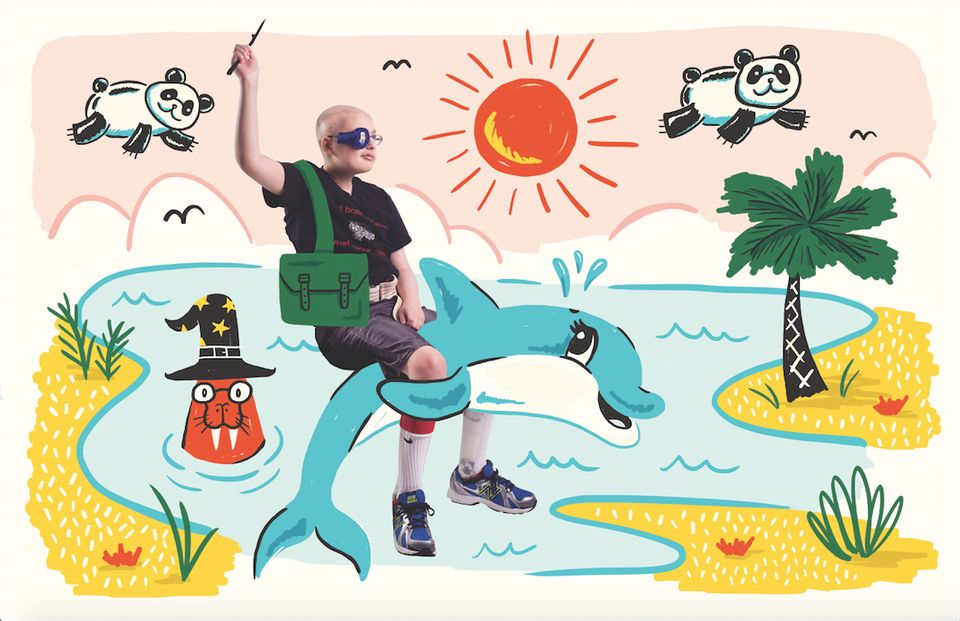 1 / 5
Hunter’s Happy Place: A Land of Dolphin Rides and Walrus Wizards
Thirteen-year-old Hunter was diagnosed with a brain tumor last year and has been battling brain cancer through multiple rounds of radiation, chemo, inpatient rehab, brain surgery and stings in the pediatric intensive care unit. In Hunter's happy place, there's a walrus wizard who magically makes pandas fly. There are are also special dolphins who work as taxis. When he goes there, he doesn't have cancer and doesn't need his wheelchair.
CHOA