I've been a cartoonist since the day I picked up my first crayon. I was a kindergartener at Unqua Elementary in Massapequa, NY. I drew a rabbit that looked more like a jellyfish and insisted it was Bugs Bunny. There was no turning back.

Approximately a million and one drawings later, when I was a junior at Georgetown University, I drew a red hippo, named him Simon and put him on a college t-shirt. I sold a lot of shirts. As he evolved, Simon developed a sunny, wide-eyed expression that made people laugh. I'm still selling shirts.

I went on to grown-up things like graduate school and jobs in advertising, media, and entertainment. But not only did I keep drawing Simon, I soon found myself creating jungle friends for him like Peep the Bird and Billy the Zebra. Before long, I had this...

I first syndicated It's A Jungle Out There to an educational network called Lightspan, then to companies like AOL Kids, National Geographic Kids, and Paramount. The kids market became my primary niche.

Now ever since I was a kid, I've been a fan of Charles Schultz's Peanuts. I still can't get enough of poor old Charlie Brown and the Red-Haired Girl or Lucy and her psychiatry booth. Beyond the fun and games, Schultz taught me something: cartoon characters can have real-life issues. A funny comic strip can be serious too.

There are very serious issues affecting animals and the environment. My jungle characters began to speak up, and who was I to stand in their way? One of my monkeys, Yoshi, lost a sister to poaching. Peep and Simon noticed the snow on their beloved Mt. Kilimanjaro melting due to climate change. They couldn't remain silent.

Here's a comic I drew about Suzanne, a bird and fortune teller, talking about global warming on a hot day. Note the nod to Schulz...

When cartoon characters talk about their problems, kids hear them - and discover that they can do something to help. I like to think of this as eco-tainment, part of the eco-lution process.

On hippoworks.com, a kid can enjoy an eco-themed cartoonlet and then click to help save jungle or feed an orphaned monkey. And if that eco-minded kid is then inspired to turn off the computer and go explore the great outdoors, that's an added bonus.

It's my big hope that kids will love my new half-hour cartoon musical, The Power of Poop (and other ways to save the world!). For all its poop jokes, the cartoon gives a science-based lesson on the powerful effect on climate change of methane and carbon dioxide. The music, the humor, and the jungle animals keep the fun going. Along the adventure, kids learn what they can do to make a difference. Even the little things can go a long way.

Henry, pictured below, is a kid who really loves The Power of Poop. After seeing the premiere, he was inspired to throw a climate change bake sale to save carbon-absorbing jungle (which is still disappearing at an alarming rate despite Henry's efforts). Henry and his family have raised $280 so far -- and they're just getting started! 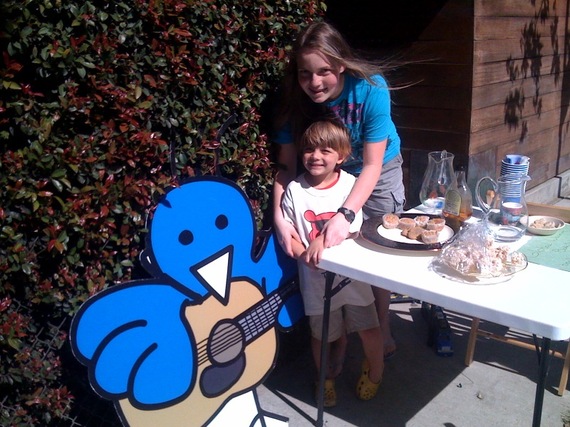 NASA, as concerned about climate change as any federal agency, has hosted several screenings of the cartoon at their Jet Propulsion Laboratory in Pasadena, CA.

And a recent Los Angeles screening of The Power of Poop led to "A Planting and Painting Day" in Marina Del Rey where local students came together with their community to create gardens and murals featuring the story's characters. 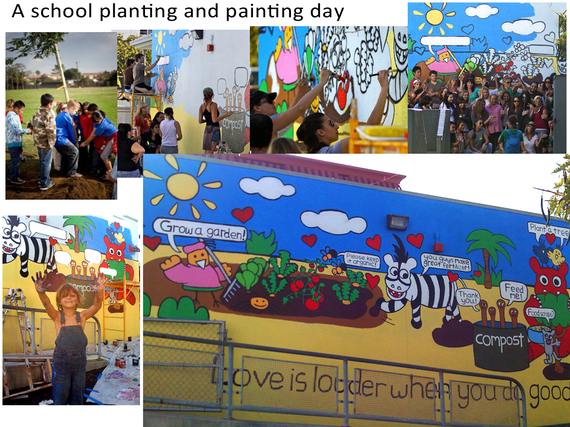 From composting to recycling, there are all kinds of useful eco habits kids can adopt. It's my hope that The Power of Poop, for all of its playfulness, can inspire action on one of the most serious issues of our time.

Here's an eco-taining clip that explains how the power of poop affects climate change. Enjoy with your friends and family and let's preserve our incredible world for today's kids - and tomorrow's too!