There are days when I wish I was forty years younger, on the cusp of a life as yet to be determined, innocent, naïve, fresh to the ways of the adult world. I never had that opportunity with my history, so I get particularly excited when I run into young activists with passion and exuberance, and even fearlessness. I had that feeling watching Selma last week, particularly while watching John Lewis and James Farmer as they fought amongst themselves and with the older organizers. However, as that film made clear, and as I've learned over those past four decades, there is often great value in the experience and wisdom of age. Dr. King and the Southern Christian Leadership Conference (SCLC) productively tempered the revolutionary ardor of the organizers from the Student Nonviolent Coordinating Committee (SNCC).

An incident recently occurred at Mt. Holyoke College where I wish there had been some wisdom imparted to the students, who acted impetuously and, unfortunately, embarrassed themselves and their cause.

The student-run theater board canceled the play, The Vagina Monologues by Eve Ensler, because, as student Erin Murphy explained,

Gender is a wide and varied experience, Murphy continued, one that cannot simply be reduced to biological or anatomical distinctions, and many of us who have participated in the show have grown increasingly uncomfortable presenting material that is inherently reductionist and exclusive.

This apparently means that the play as it stands is offensive to trans students. As one student said,

But we can't present a show that is blatantly transphobic and treats race and homosexuality questionably, when one of the conditions of getting the rights to the show is that you can't critique it or alter it.

It is particularly ironic that this should have occurred at Holyoke, because this school just recently decided to admit trans women -- the third all-women's college to do so. What is most concerning is that apparently no one at the theater did any research into the history of The Vagina Monologues.

Ms. Ensler has been attacked as racist and co-opting Trayvon Martin, anti-native Canadian sympathies, and insensitive to Congolese women, and here she's being called transphobic. She doesn't need me to defend her, but having read some of the materials for which she's being attacked, I see primarily a sense of victimization from the critics who don't understand the value of allies and are missing an opportunity to hitch a ride with a very powerful movement. It reminds me of the failed attempt by some trans men to hijack language used by NARAL and Planned Parenthood because the language didn't recognize that some trans men can and do get pregnant. Not gutting its traditional language usage to make a few dozen trans men feel included doesn't make Planned Parenthood and NARAL transphobic or insensitive.

With respect to calling her transphobic, however, I will co-opt the comment of Senator Lloyd Bentsen to Dan Quayle from the 1988 Vice Presidential debate:

I was directed by Eve Ensler. I know Eve Ensler. Eve Ensler became a friend to many trans women during a very intense week in 2004 of which you are unaware. You are not qualified to disparage Eve Ensler.

So here's a little trans history, and I welcome the opportunity to recall one of the best weeks of my life. Army Private Barry Winchell was murdered at Ft. Campbell, Kentucky, in the summer of 1999 in an anti-LGBT hate crime. Winchell was murdered because he was perceived as gay, though he was straight and dating a trans woman, Calpernia Addams, whom he had met at a gay club in Nashville. Because the soldiers couldn't distinguish between gay and trans, and because Calpernia was performing in a gay club, they didn't recognize the relationship as straight and perceived Winchell as being gay.

This story was made into an Emmy-nominated movie, Soldier's Girl, where Winchell was played by Troy Garity, Jane Fonda's son. Calpernia worked on the film and met Jane Fonda, who ultimately suggested to her friend, Eve Ensler, that they do a trans production of The Vagina Monologues. In February, 2004, in the Pacific Design Center ("Blue Whale") in West Hollywood, this effort of Deep Stealth Productions, directed by Calpernia and Eve Ensler and under the auspices of Jane Fonda, became the first all-trans women production and included a new monologue written by Eve based on our interactions during that week. A documentary of the production was created called "Beautiful Daughters," directed by Josh Aronson, and has been broadcast many times on LOGO. 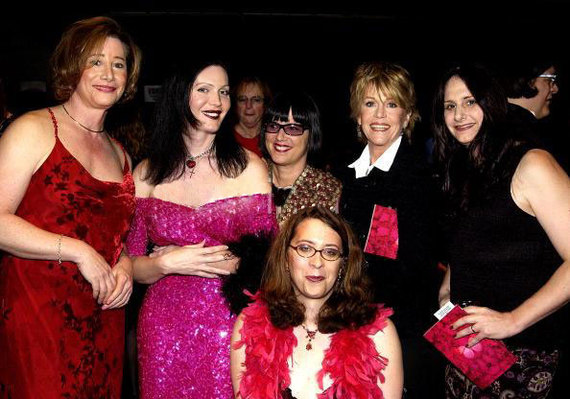 This was Eve's statement:

I stand in solidarity and strength and tenderness with women who have fought for the girl in them not to be beaten or silenced or ignored. I am awed by the courage and vision of transwomen who held to their authentic nature in the face of everything including shame and violence. May this V-Day be a day of liberation, celebration and kindness.
Love,
Eve

And this was Jane's:

I am so moved by the women who have forfeited Penis Privilege for Vagina Power. It's certainly the road less traveled but it's the road of courage and you are not alone.
Love,
Jane

It was an incredible experience for me to work for one intense week not only with Eve Ensler and Jane Fonda, but my 22 fellow actors, from all walks of life, many of whom have become dear friends, as well as many of our friends who came to LA for that week in a remarkable show of solidarity. Being the first actor on stage, followed by my physician colleagues, Becky Allison and Marci Bowers, was a moment I will never forget. And, remember, this production occurred over a decade before the "transgender tipping point," and as such should be seen as an act of remarkable courage by all those involved. 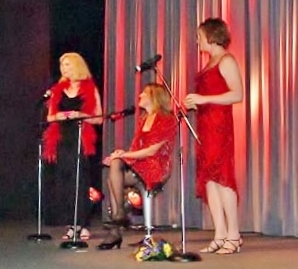 And the most absurd aspect of this? Today, a decade later, trans women face incredible hostility from a group of radical lesbian separatists (known as TERFs) who hate trans women because they believe that without all the female reproductive plumbing we can't be raped and, therefore, aren't real women. Eve Ensler wrote this play because she felt that "Women's empowerment is deeply connected to their sexuality." She also stated, "I'm obsessed with women being violated and raped, and with incest. All of these things are deeply connected to our vaginas."

Two years later she told the press that "the purpose of the piece changed from a celebration of vaginas and femininity to a movement to stop violence against women." And six years after that she welcomed trans women into the community of women, fully aware of the lifetime of violence and discrimination suffered by the women who performed that historic evening.

Just during the past few days she clarified further:

Ten years ago, I was thrilled when a group of transgender women decided to do an all-trans production of my play. In preparation for the show, we gathered for days of dialogue and sharing of stories that, at the request of the group, I turned into a theatrical monologue called They Beat the Girl Out of My Boy. Since that first performance in 2004, the monologue has been available for inclusion in the play through V-Day, the global activist movement that grew out of The Vagina Monologues. Offering the monologue to our activists around the world was a deliberate decision on my part to encourage communities to address the needs and realities of the transgender community. Trans women and trans men have been welcome to perform in The Vagina Monologues throughout its history.

I believe college students should be free to produce whatever plays they like, however they like. If they're not happy with the casting of earlier renditions, they can change the casting, as was done last year at Columbia. They can show solidarity with trans women by casting trans women in the production, and can even use the trans monologue. Or, has been suggested, they can create an all-new, even more trans-inclusive play.

Shutting it down completely is just a political tantrum, and no different than a school board prohibiting all student groups so as not to have to allow a Gay-Straight Alliance (GSA). Imagine how deprived we would be if earlier generations had decided Shakespeare was too conservative to be read and performed, and disappeared from common knowledge. Not enough racial consciousness for you? Cast a black man as Iago and a white man as Othello. Not geeky enough? Cast Star Trek actors in the dramas (Shakespeare Theatre, DC), or, better yet, weave Shakespeare throughout the Star Trek universe ("The Conscience of the King," "Catspaw," "Elaan of Troyius," Star Trek VI and Hamlet in Klingon!). Play up the crossdressing in the comedies.

The Vagina Monologues is not Shakespeare, but if generations over the past four centuries have been able to adapt the Bard, surely feminist students can do the same for Eve Ensler. Especially since she is, and has been, a great ally, and a true feminist leader.