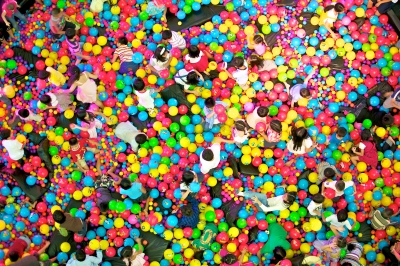 It's all SpongeBob's fault? I knew it.

Such was my thought when I heard about that recent finding that watching just nine minutes of SpongeBob SquarePants can cause immediate short-term attention and learning problems in 4-year-olds. "This is why we don't watch TV in our house," I crowed. "This is why I found Camp Chaos so over-the-top." I may have sounded grating, had anyone heard me, but was gloating too much to notice.

Camp Chaos was my four-and-a-half year-old's first camp experience this past summer, and it left me wondering just how far we'll go these days to keep our kids entertained.

For preschool, I would drop my daughter off in a little garden outside the classroom at our local Waldorf school. The parking lot was so small and remote, the baby could stay in the car if I ran in and out quickly.

At Camp Chaos, drop off was in a space the size of a Roman arena, with different specialized camps clustered in gaggles around the room. As I said goodbye the first day, Ke$ha belted out her newest single from giant speakers, while counselors began call and repeat shout-outs worthy of the Marines. My daughter looked all at once terrified and thrilled.

The day at Camp Chaos was full throttle. With a few stops for water, lunch, or candy, hard and hot summer play was the only way to go. At the end of a camp day I would have thought way too long for her, our child came home ecstatic. She quoted from movies we wouldn't think of watching and informed me that ingredients I deemed treats were actually real food.

Really, though, there was no true harm done. A week in the real world of Camp Chaos didn't turn my daughter into the dreaded unfocused child of the new millennium. It didn't kick her out of the toddler demographic and on her way into tween. It did not give her ADD or an attitude.

Even better, did I mention how much fun she had? As for me, I no longer felt so nervous about keeping her innocent of the big wide world she'd one day need to navigate. Now I have Camp Chaos to take care of that. Now I realize that even if we keep her in a Waldorf school for as long as we can, sprinkling in some less sheltered experiences could expand her bubble slowly, rather than pop it altogether. It could provide some balance.

To this end, I soon began to check out some children's programming, wondering what we were missing with the tube turned off at our place (as it is in many other Waldorf-schooling homes). This is how my husband came to find me on the couch one night watching "Dora the Explorer" on Tivo, by myself.

I was sad to find that even Sesame Street, while retaining some of the sweet, slow, intriguing nature of my youth, was now infused with many of the manic camera moves and scene changes common to shows like SpongeBob. They say it takes 90 hours of SpongeBob to equal one of Mister Rogers in this respect.

Then I moved onto the newer animated shows and had to really buckle in. I was shocked at the amount of overstimulating insanity they seemed to think necessary to keep our children interested. Does a character really need to watch a music-video on his smartphone while he rides an air-scooter that shoots flashing rainbow exhaust, just to teach the letter "V"?

I know my child is a bit green with television and that even CNN has her eyeballs glued to the screen right now. But are other pre-K kids that jaded that they need all these bells and whistles etching away at their attentions spans before they even crack a textbook? Or do those in media production and marketing just think they need to top whatever the competition has done to knock kids over the head with entertainment? If this is what they do for 4-year-olds, I thought, what do you have to do to keep a 10-year-old interested, blow yourself up?

Which brings me back to Camp Chaos. Perhaps they, too, think they need loud Top 40 and Otter Pops to make sure the kids want to come back the next summer. If their competition is the Wii and SpongeBob, I think I get it.

But I know my young child would have been just as thrilled with a puppet show, as candy and craziness. I'm fairly sure the same could be said of others in her age group. After all, just a couple of years ago, they thought the best part of the toy was the packaging.

I'm not so sure about those a few years older than my daughter, though. And honestly, if I crammed this first year of kindergarten with iPhone play in waiting rooms, DVDs in the car, and dinners in front of the television, perhaps by next summer she too would be demanding more from her counselors than just games and crafts.

This is not to say that I'm sure what we're doing is the right and the only way to raise an engaged and focused kid. It's what seems to work for our individual family at this moment in time.

I'm just wondering if everyone realizes the choices we are actually making all the time about the ways we entertain our kids. To me, it seems like this could easily become one long road of upping the ante on what it takes to make an impression.

If we choose to let a marketing department or seasoned small-business-owner decide what's entertaining for our kids, we could unwittingly be playing a high stakes game that doesn't end until they go off to college with a laser show, just to be sure they're paying attention. As with so many things in parenting, it's not about the individual choices we make, as much realizing we are making choices at all.

Having said that, we've already booked our place at Camp Chaos again for next year. By then, my daughter may have forgotten about screaming competitions for candy prizes, and experience the thrill anew... one can only hope.

More:
Parenting simplicitychildhoodParentsspongebob
Newsletter Sign Up
Raise the kind of person you'd like to know
Subscribe to our parenting newsletter.
Successfully Subscribed!
Realness delivered to your inbox