Children in Ferguson have been protesting along with their families since the shooting of Michael Brown on Aug. 9. They have joined the marches day and night, sporting T-shirts in support of Brown and often holding their arms up in protest, chanting, "Hands up! Don't shoot!" They have also participated in art tributes to Brown and helped with community food drives.

Protests erupted in this St. Louis suburb after officer Darren Wilson shot 18-year-old Brown, who was unarmed, on Aug. 9. After some violent clashes between police and demonstrators, things now seem to be calmer.

Here are some of the children who have taken part in activism in the wake of Brown's death: 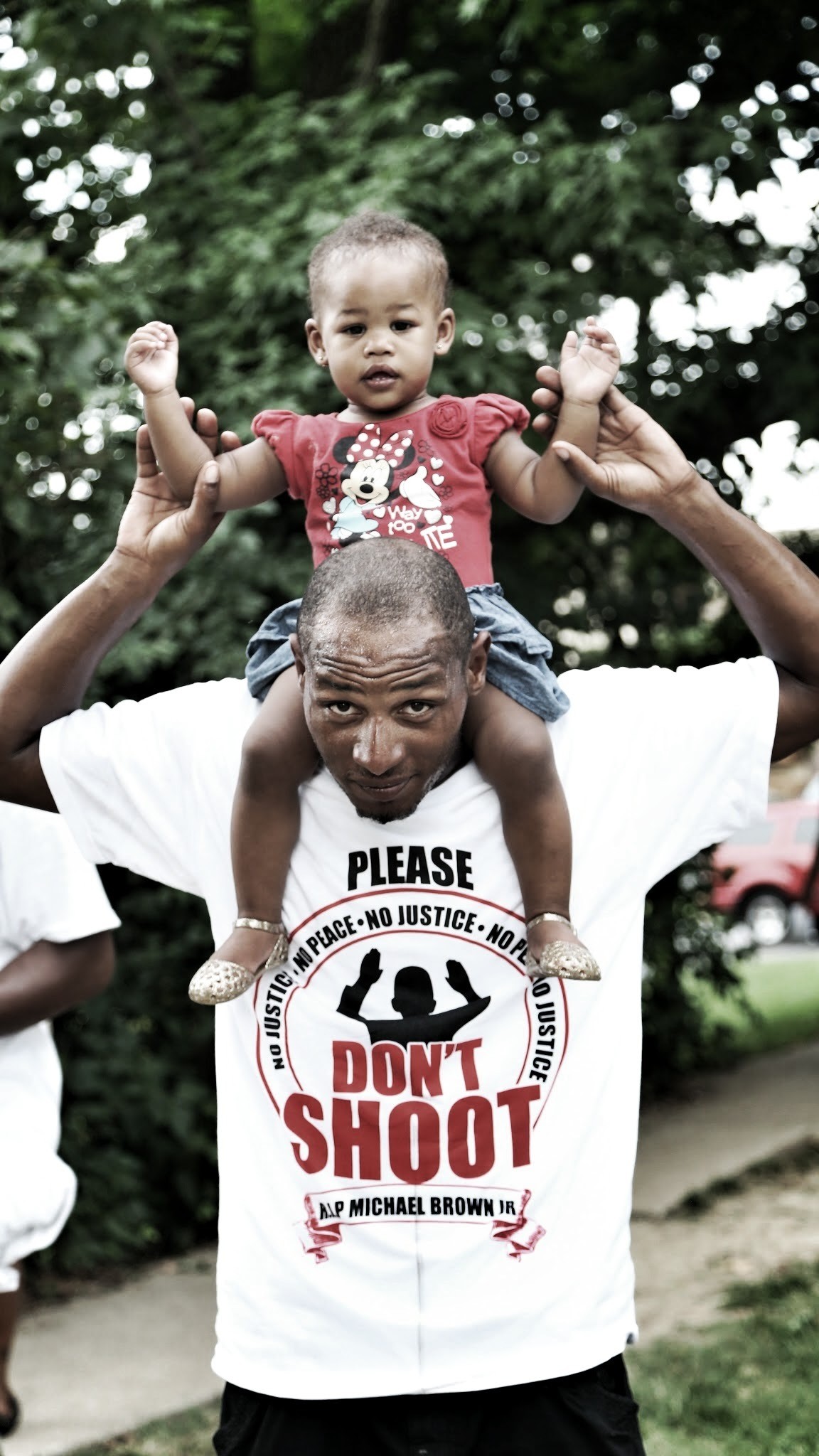 On the afternoon of Aug. 23, protesters march along Canfield Drive, where Michael Brown was shot. They passed a truck of food donations being given to the community by Crisis Aid International, the St. Louis Police and Ferguson Mayor James Knowles. 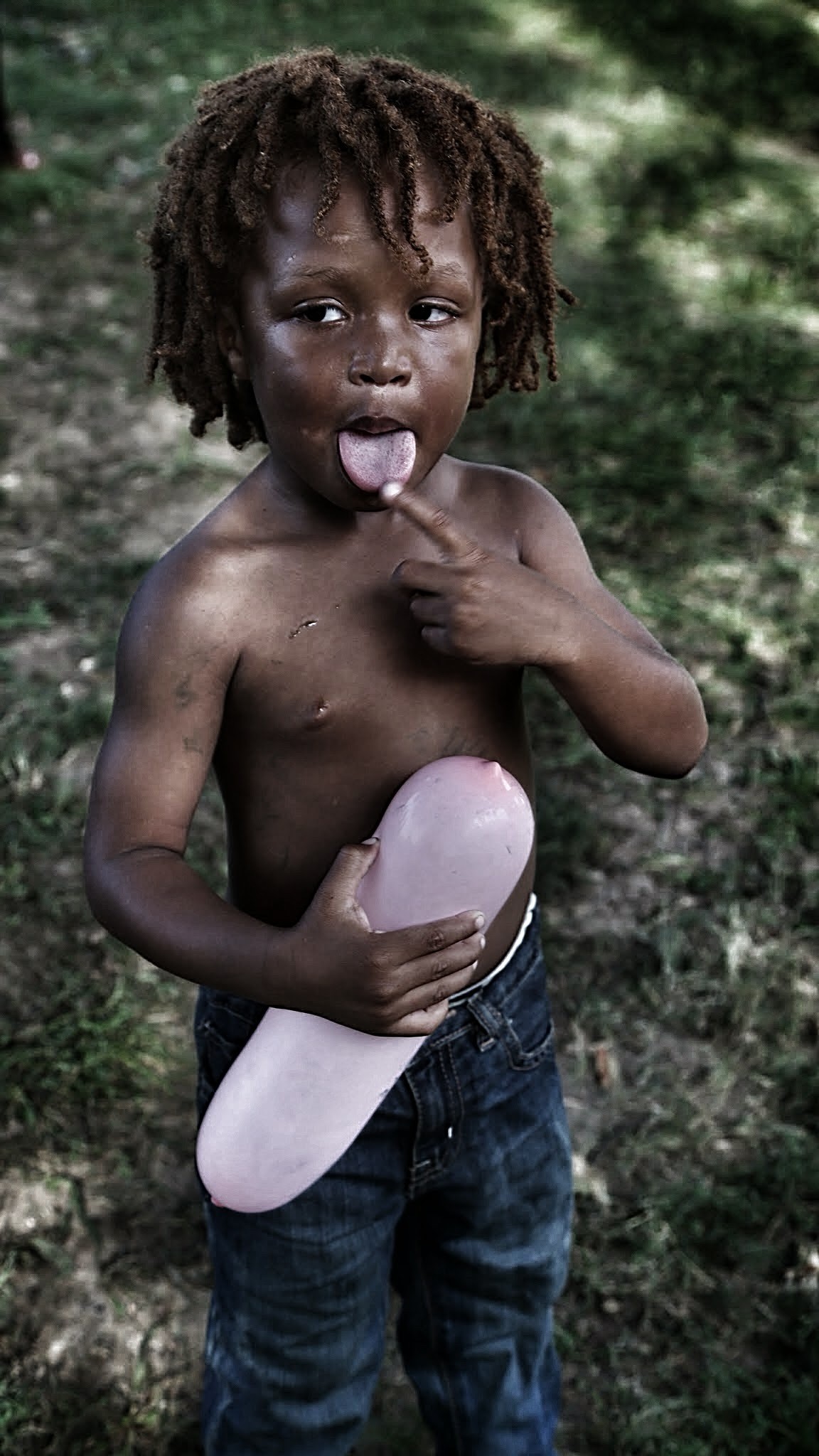 A young boy blows up a balloon to add to a tribute for Michael Brown on the afternoon of Aug. 23. The tribute is on Canfield Drive, where Brown was shot on Aug. 9 by officer Darren Wilson. Many children contributed balloons, toys and pieces of artwork to the memorial. 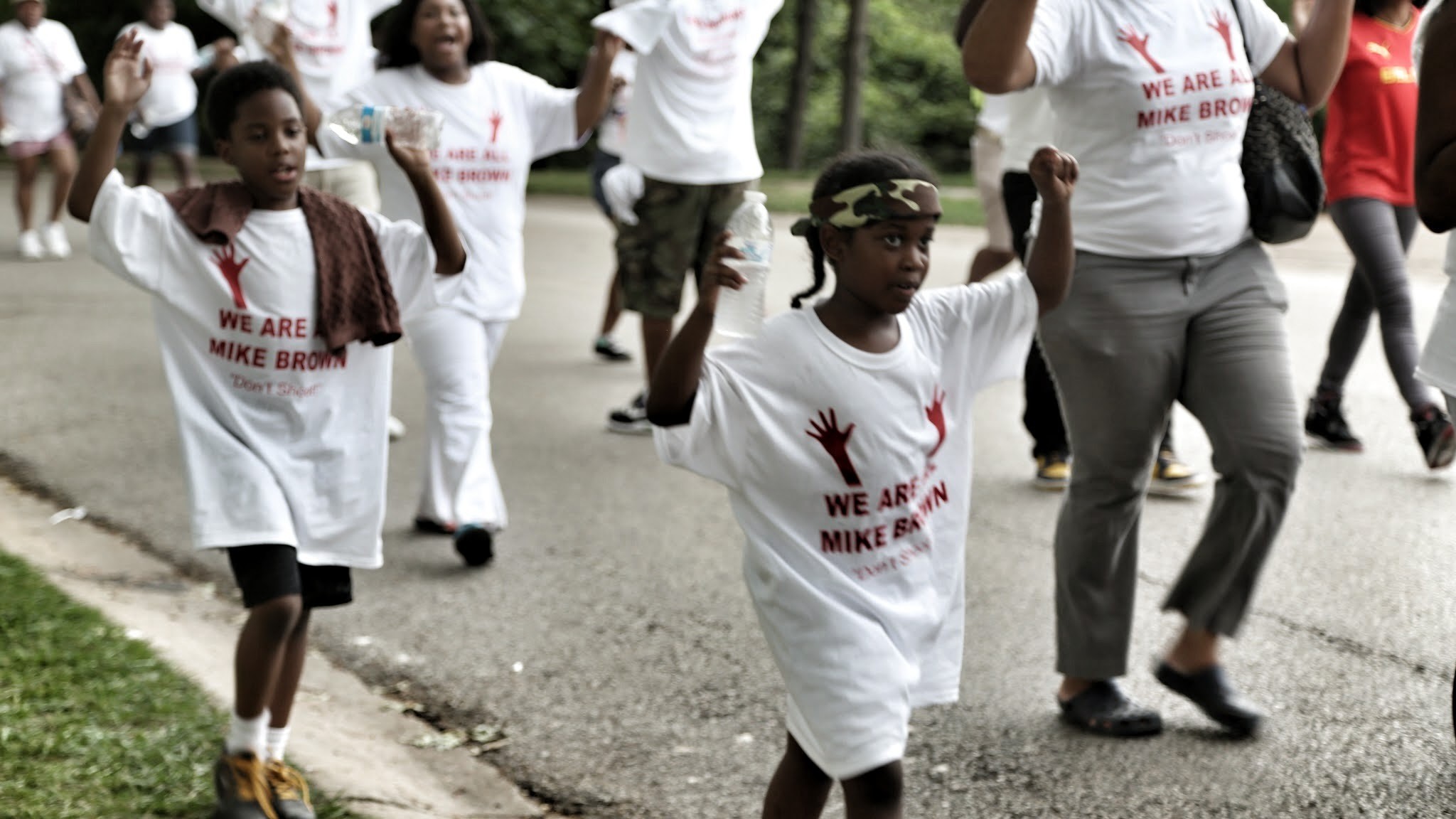 Ferguson protesters walk by the food donation truck supplied by Crisis Aid International and distributed by the St. Louis Police on Aug. 23. Protesters continued to march onto Canfield Drive, where Michael Brown was shot. 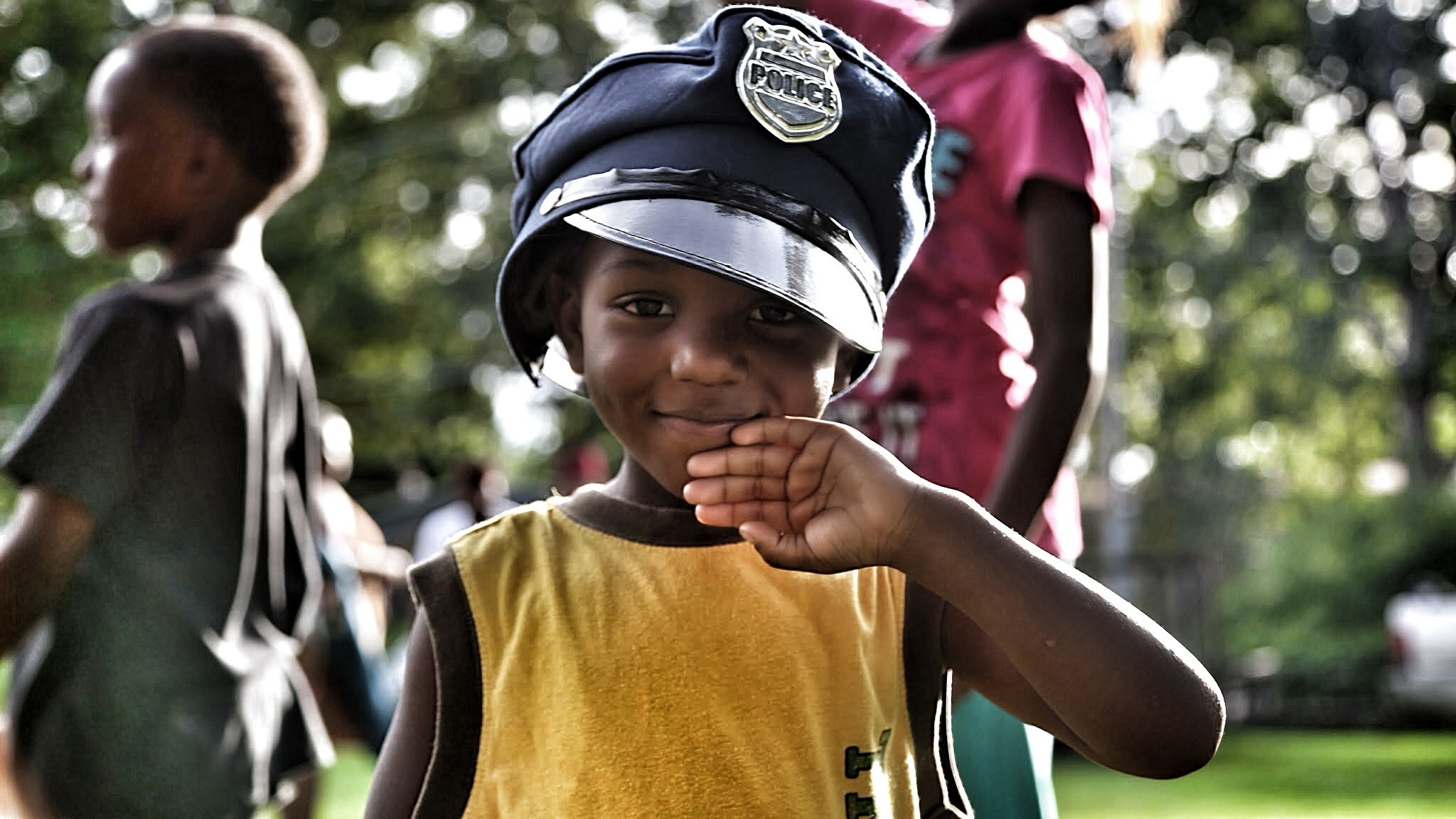 A young boy wears a toy police hat during a protest on Canfield Drive on Aug. 23. A number of children were playing with toy police badges and hats that their parents gave out. While they played, their parents ran a food drive supplied by members of the community. 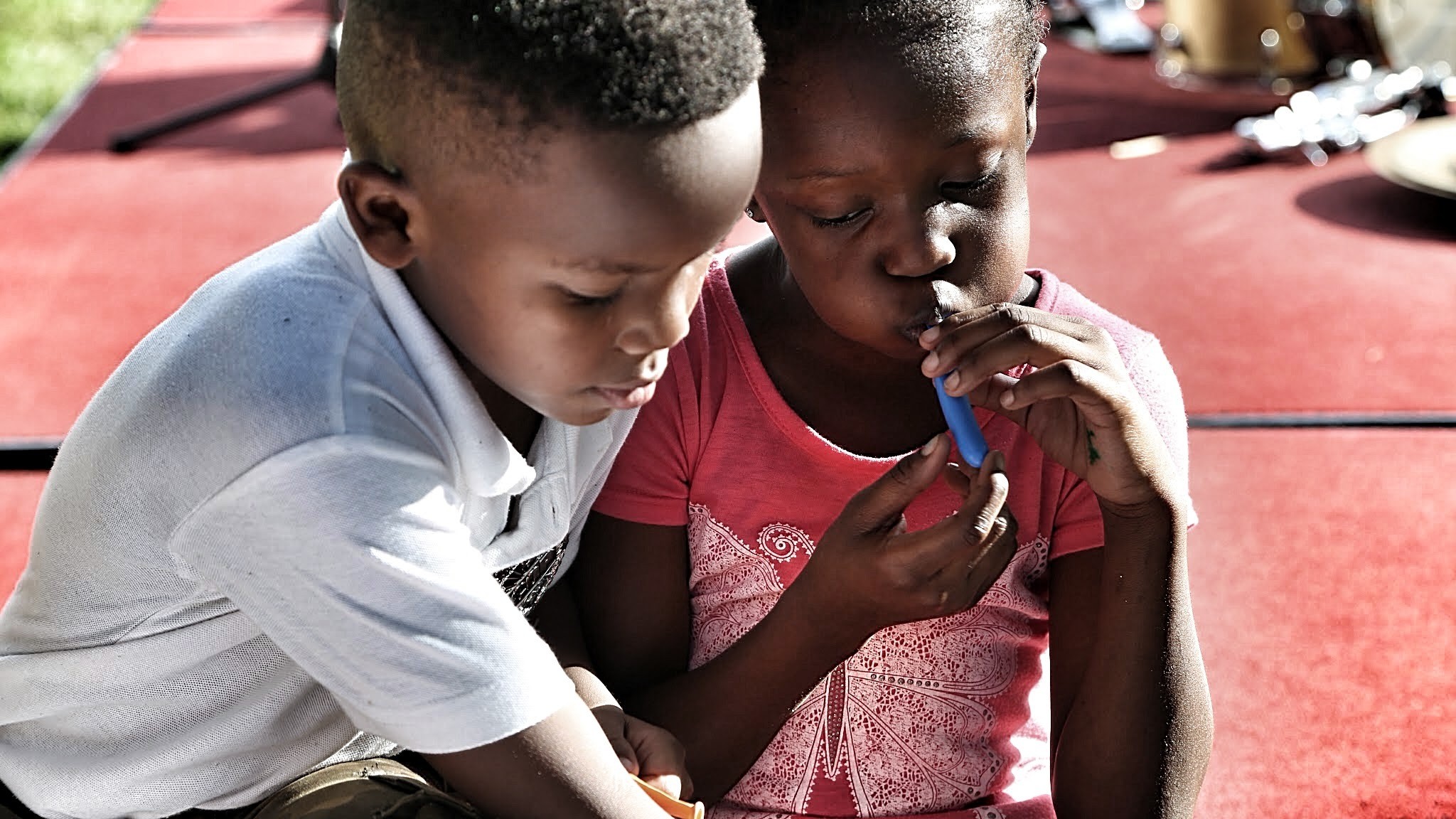 Two children add balloons to the tribute on Canfield Drive for Michael Brown on Aug. 23. The tribute consists of a line of roses along the road, leading up to a sign that reads "Hands Up Don't Shoot, August 9, 2014 RIP Michael." Around the signs were flowers, candles and toys. 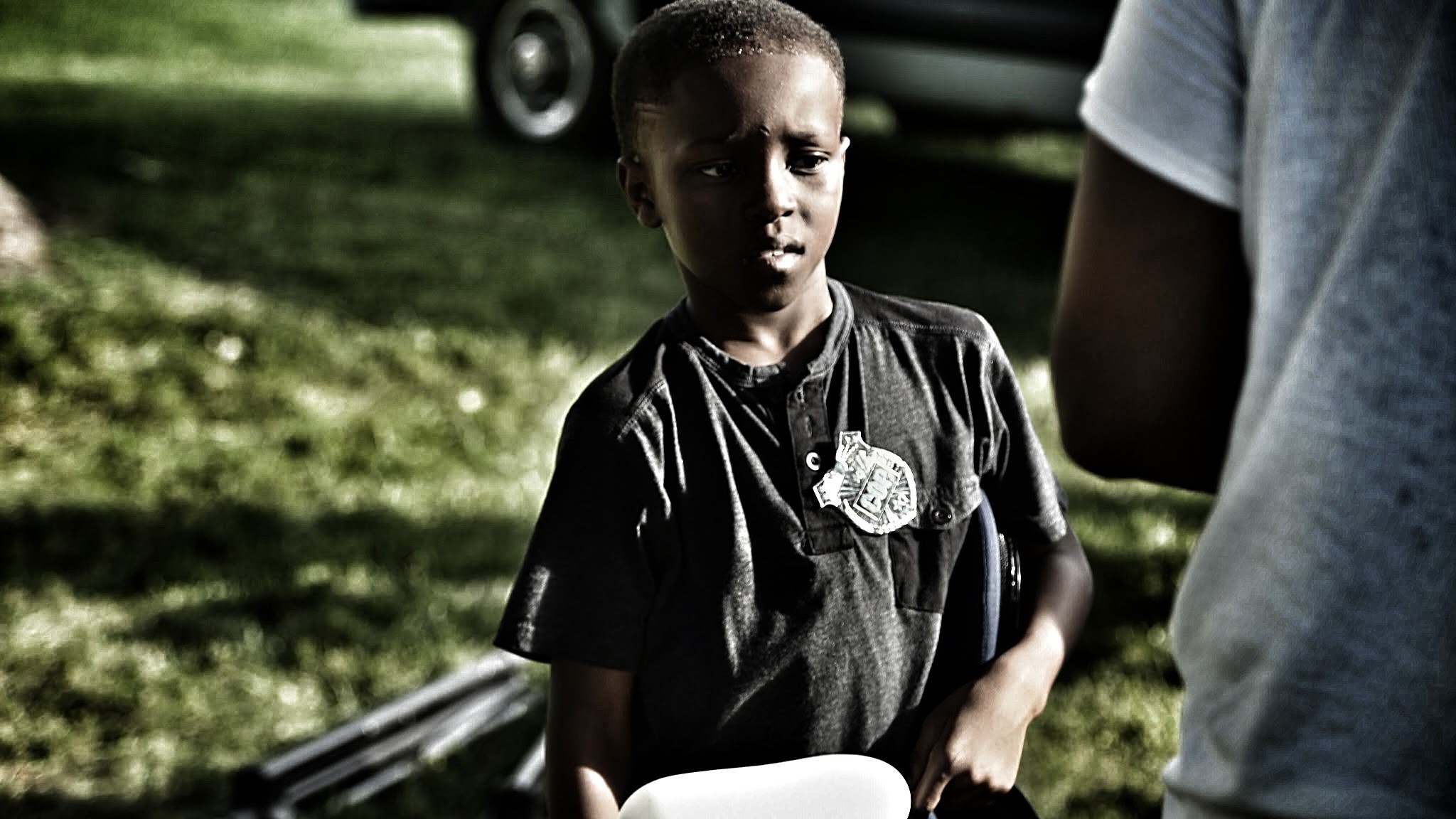 A young boy wears a toy police badge on Aug. 23 on Canfield Drive, where Michael Brown was shot. While his parents packed up a food drive, he and his friends played with the toy police hats and badges. 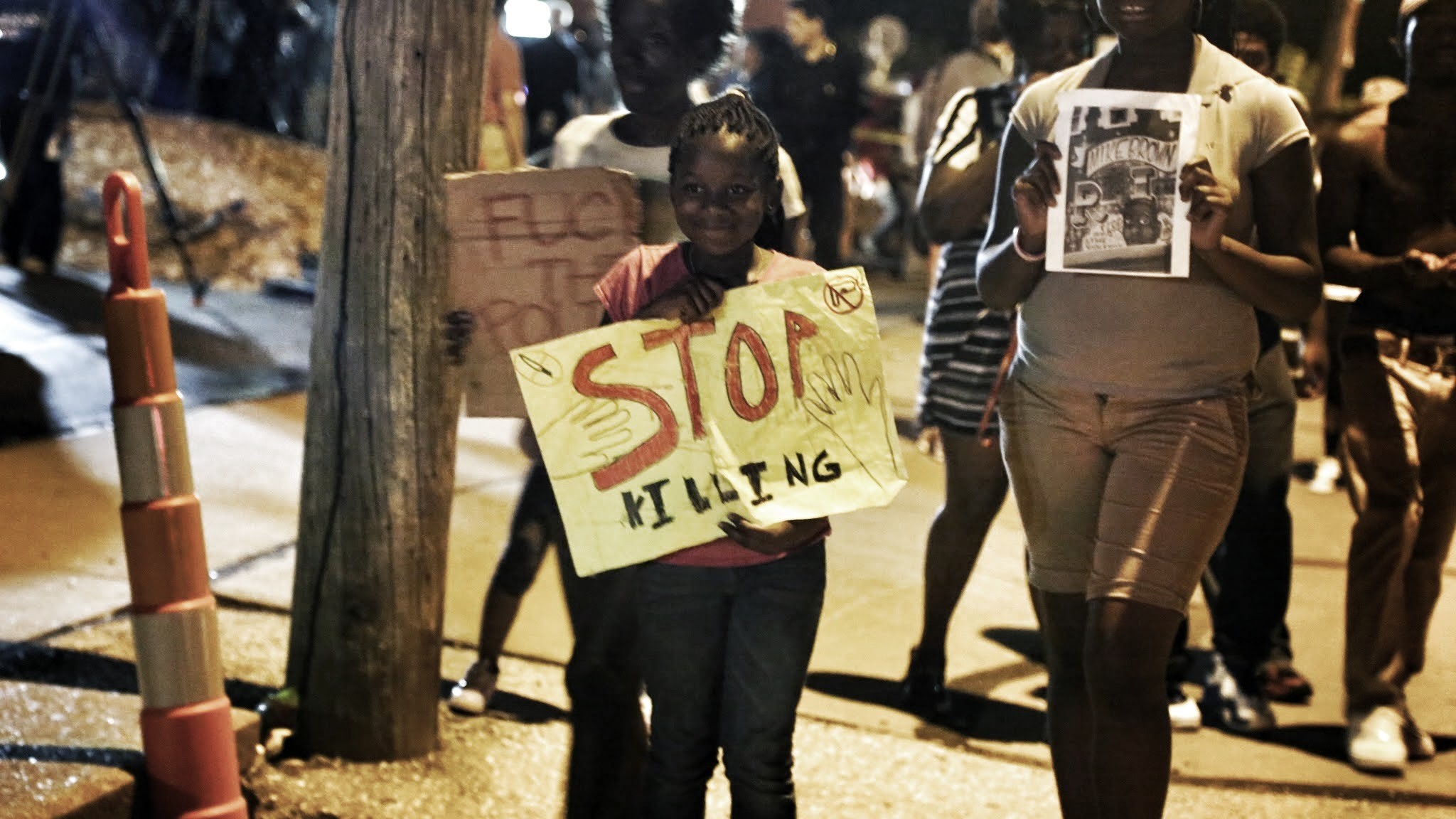 On the evening of Aug. 22, children join a march that circled West Florissant in Ferguson. The protesters marched until midnight. Many of the children had drawn their own signs to hold while marching with their families. 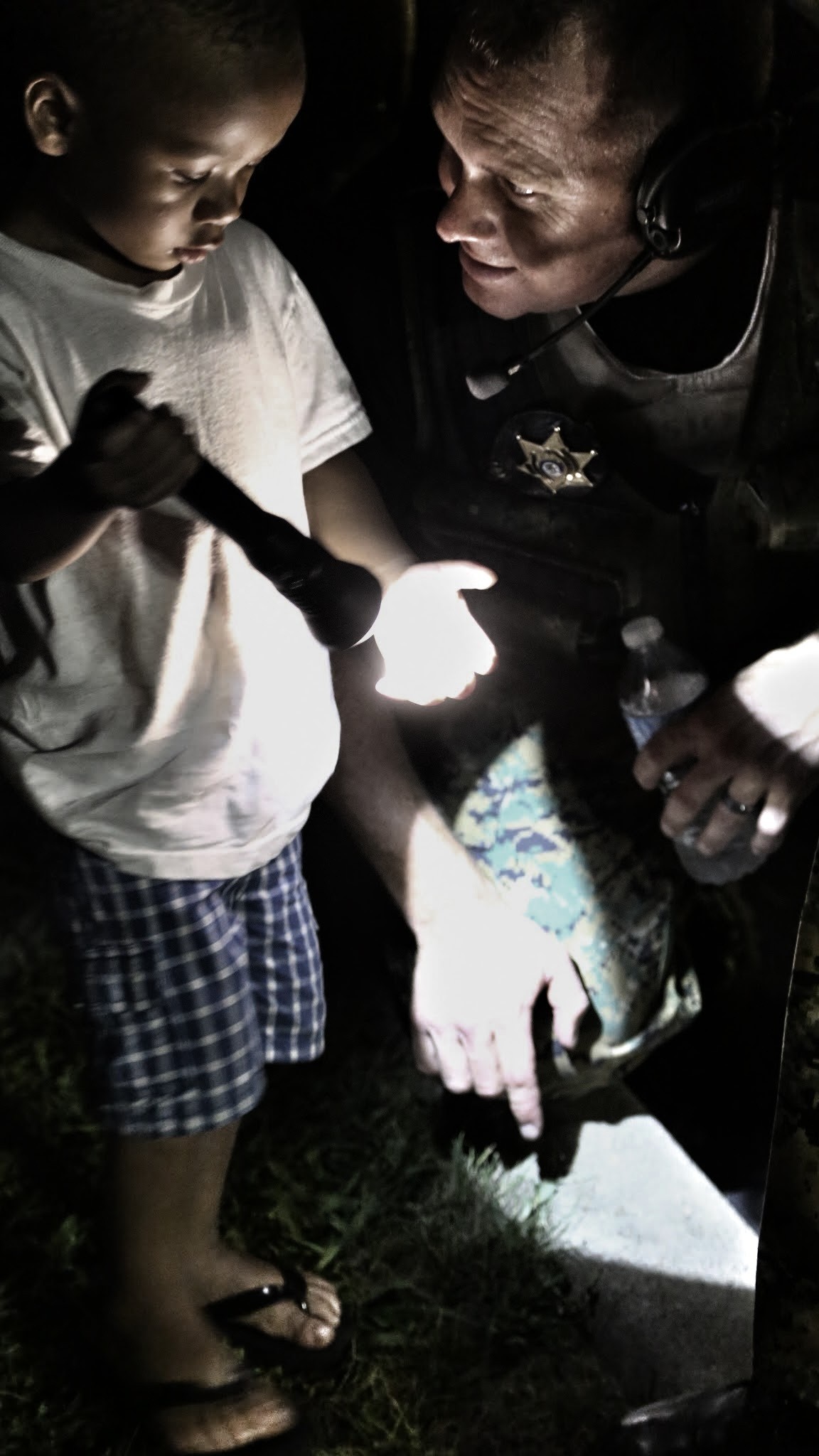 An officer pauses to show a young boy how to use his flashlight while his parents chat with the other officers on Aug. 21 on West Florissant. The family was on their way home from the protests around 9 p.m. 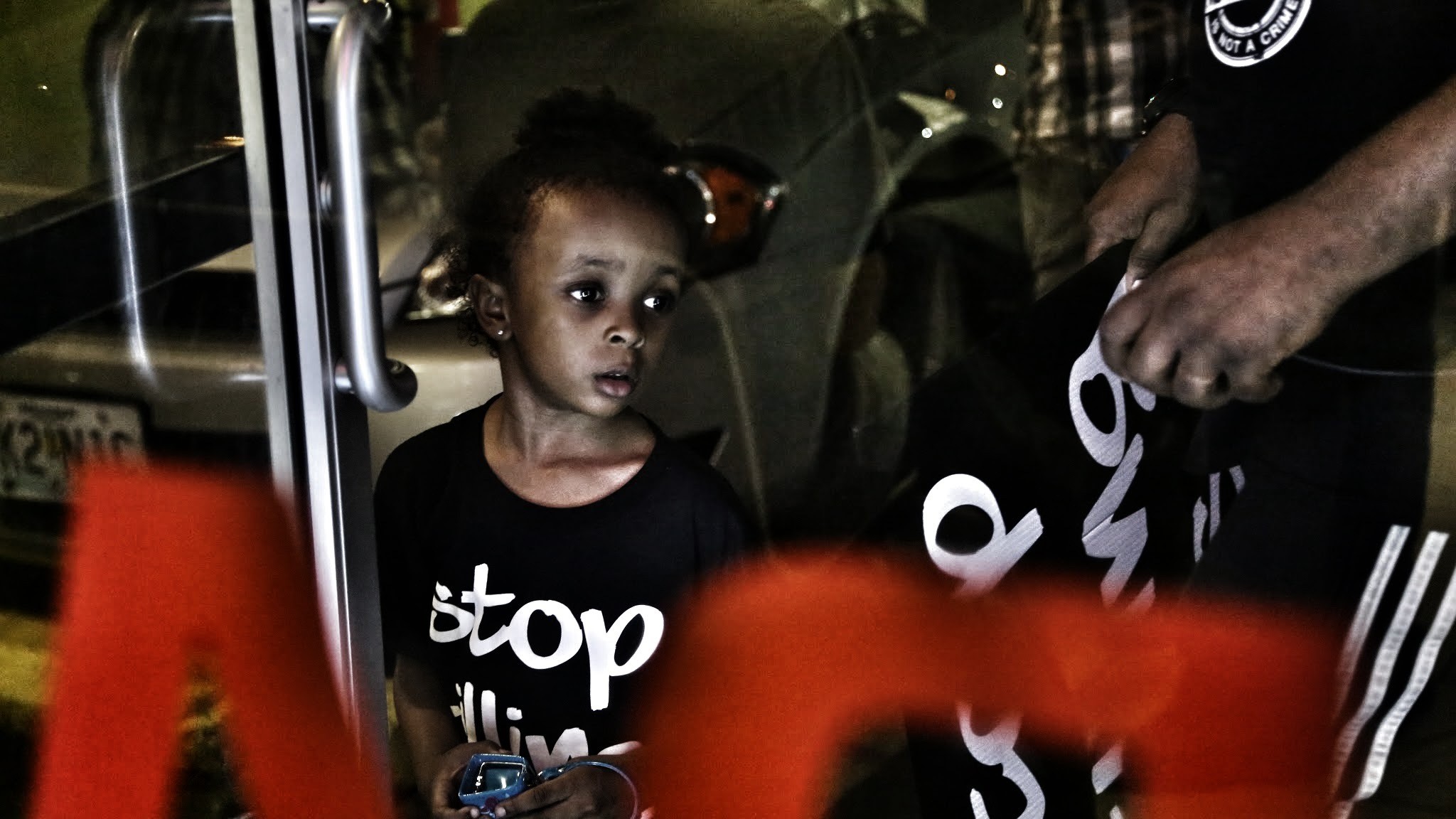 On Aug. 21, a young girl and her parents take a break from the protests and grab a bite at Ferguson Burger Bar on West Florissant. They wore "stop killing" T-shirts. 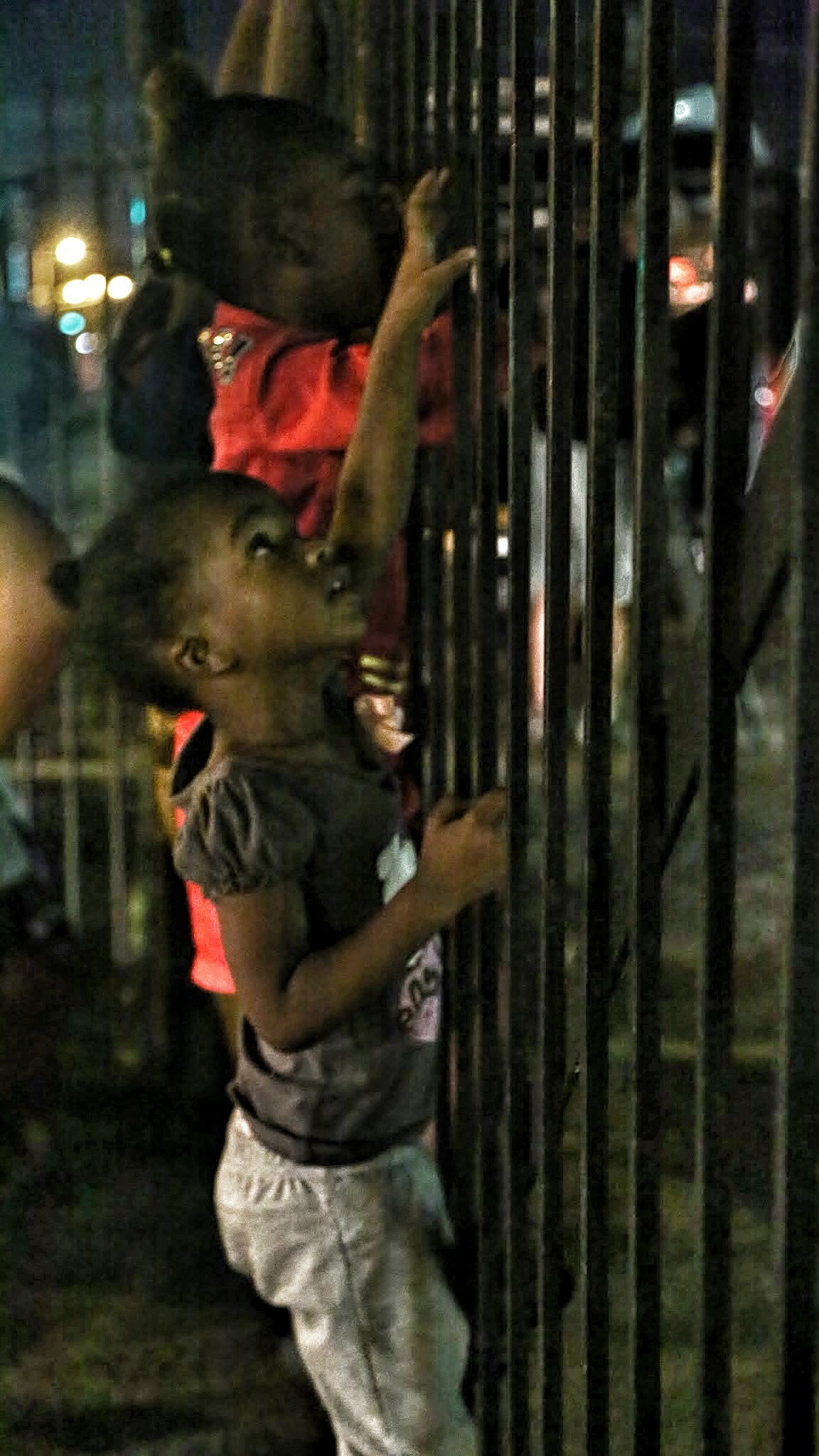 Children play on the fences surrounding a parking lot while their families march in a protest on Aug. 21. Many children stayed on the sidelines to play, while others joined the march. 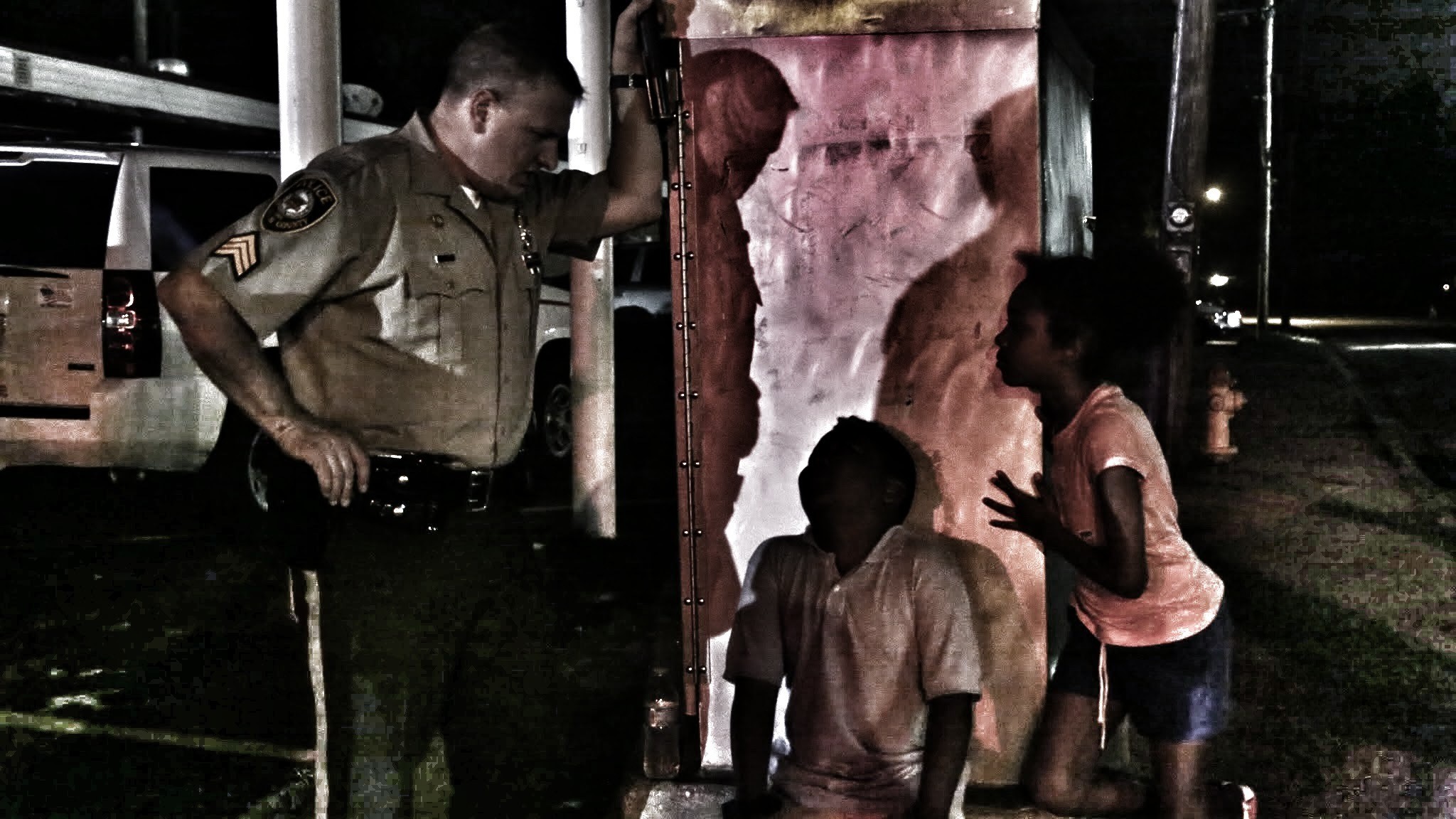 Two children chat with an officer while their parents march in protest on Aug. 21. He asked them about their favorite subjects in school. Many police officers have attempted to improve their relations with the community by interacting with children during protests. 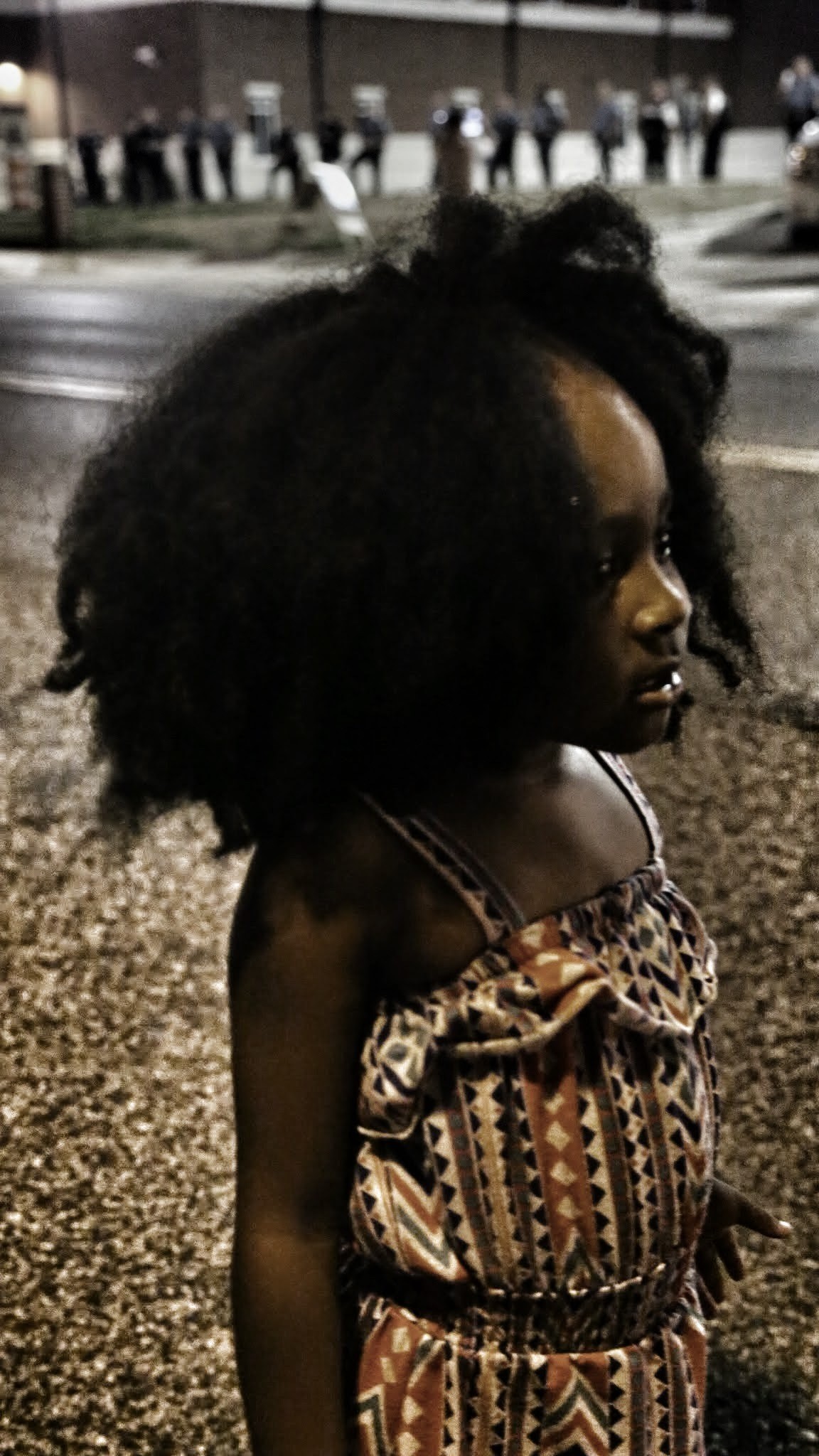 A young girl stands with her mother on Aug. 22 as protesters move from West Florissant to South Florissant, across from the police station, while police were lining across the street. The demonstrators were demanding the arrest of police officer Darren Wilson, who shot Michael Brown. 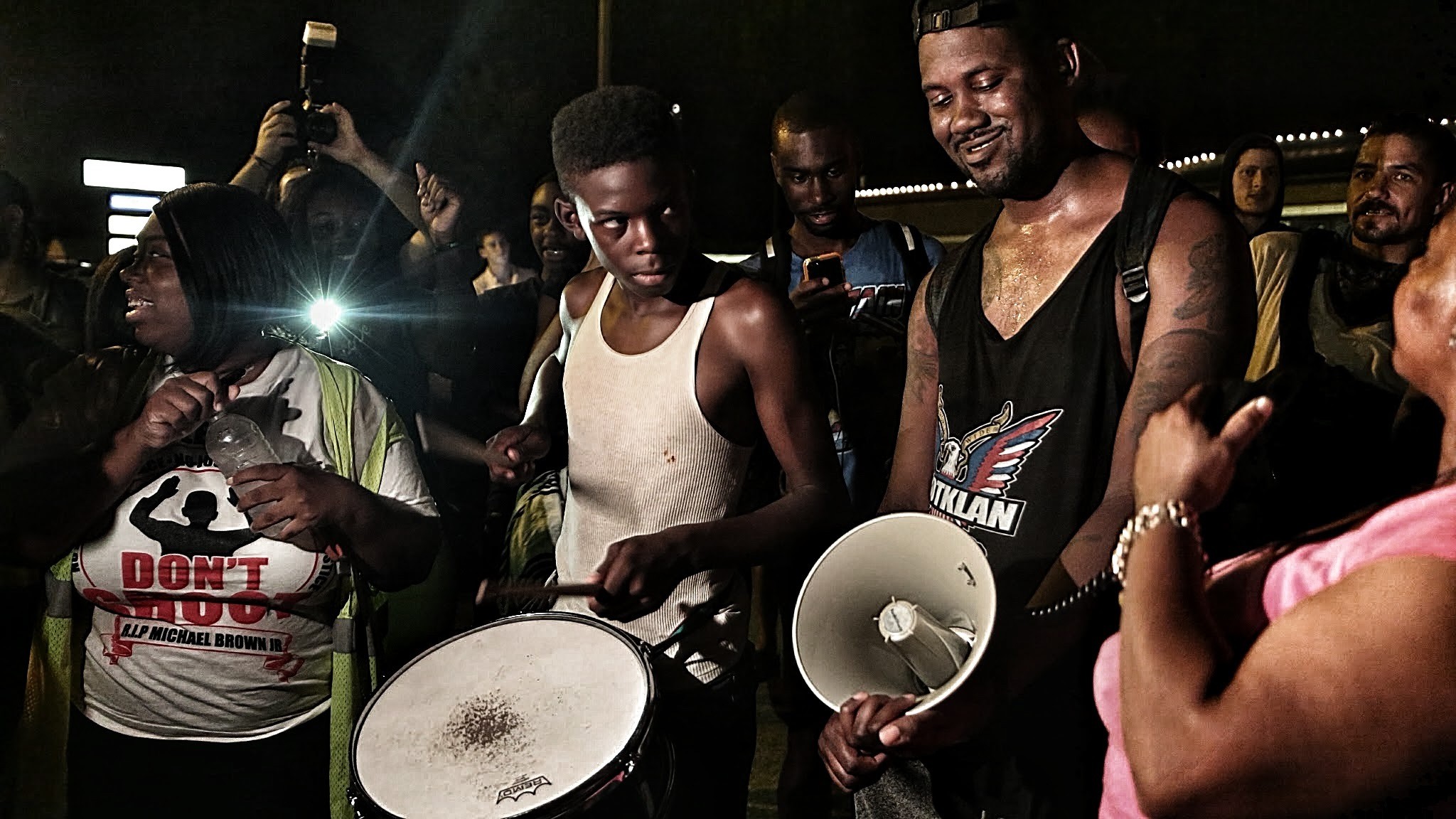 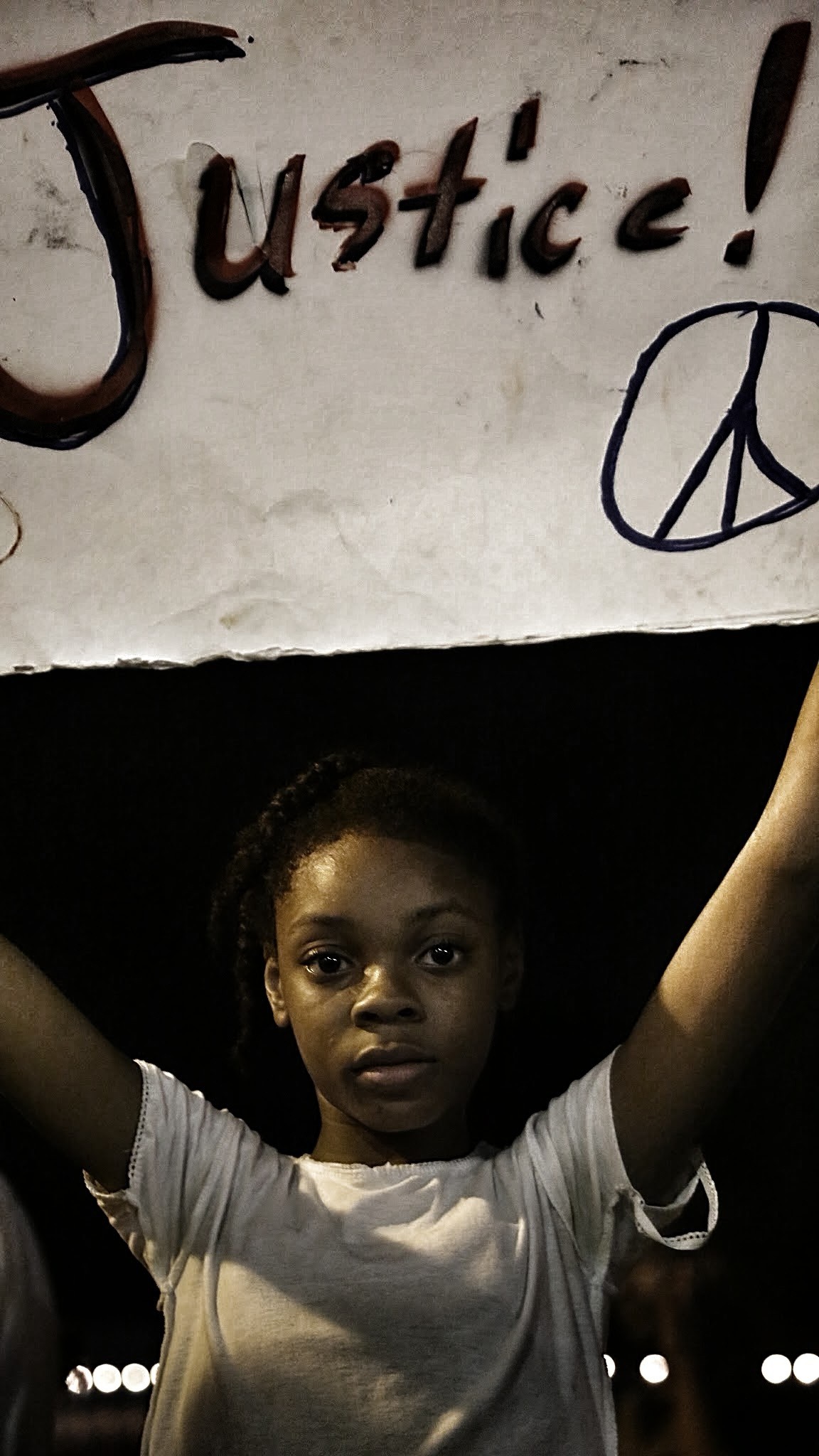 A young girl holds up a sign across from the Ferguson police station, where protesters gathered on Aug. 22 to demand the arrest of officer Darren Wilson. 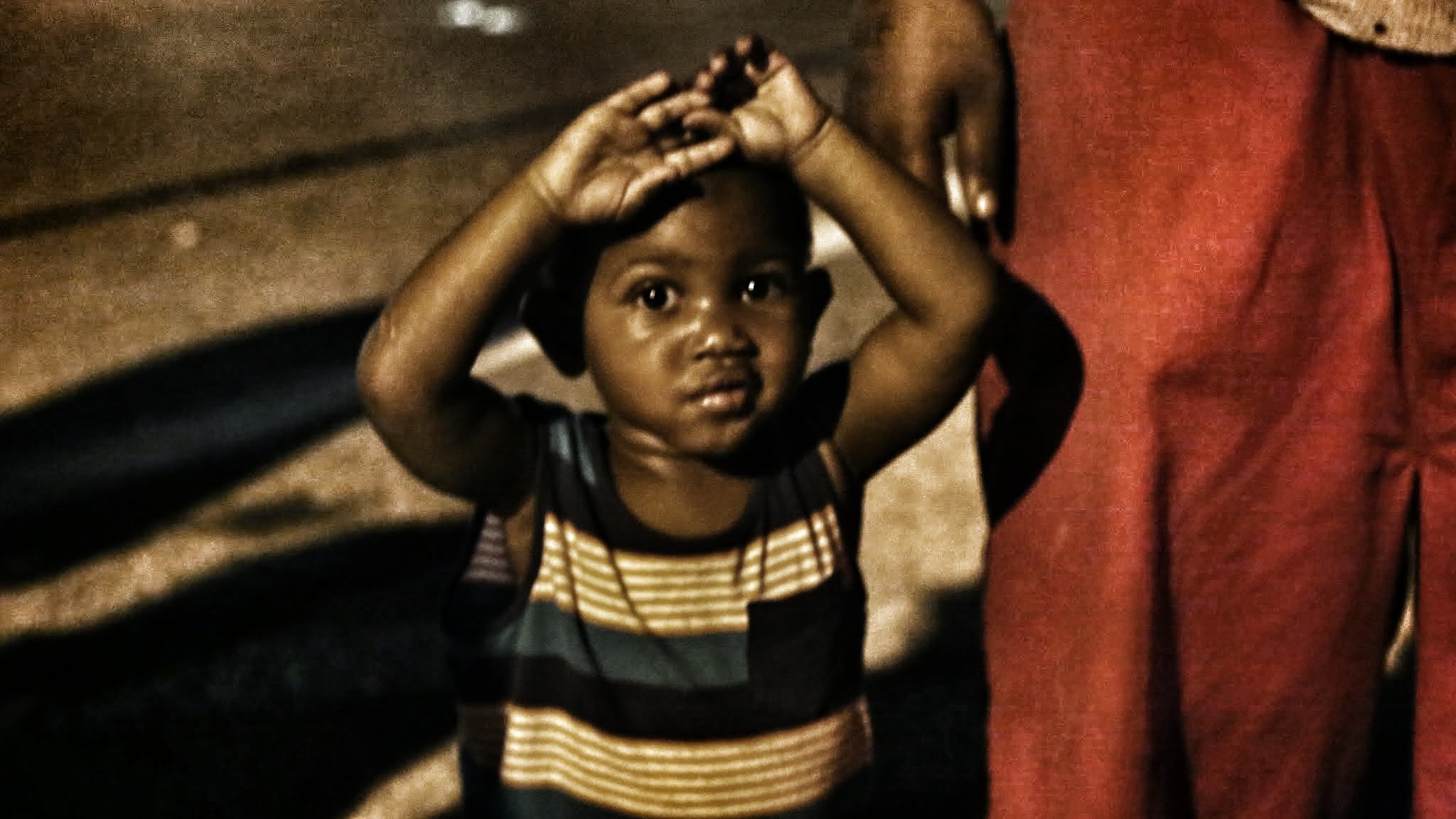 Children chant "Hands up! Don't shoot!" on Aug. 22 as they march along West Florissant, near the street where Michael Brown was shot.