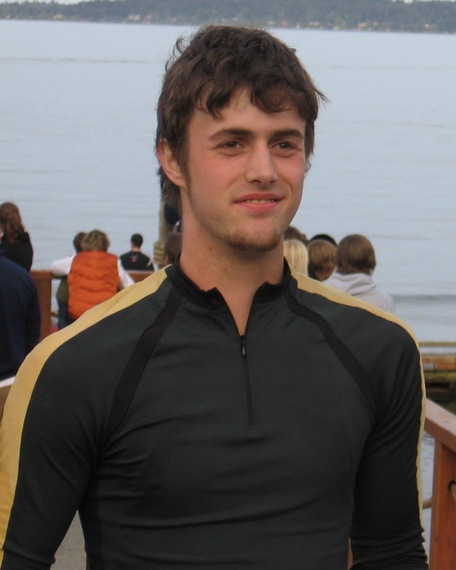 My oldest son, Gilder, starting rowing in eighth grade. He was a big guy, gawky, not super well-coordinated. He had played soccer since age five, and had developed an affinity for hopping away from the ball whenever it headed his way. Rowing was a great choice for him, as his height was a plus and lack of eye/foot coordination would not prove an impediment. Yes, he would have to attend every practice, commit himself to his team, but he seemed up for doing that.

Early that first autumn of his rowing career, Gilder and I had an argument. I don't remember the details of that particular disagreement -- we had so many -- but I will never forget his threat in the heat of the moment: "I'm going to quit rowing." Clearly, he was banking on my desire for him to follow in my wake, to pursue the sport that I had fallen in love with as an adolescent. My response? "If you are rowing for any other reason than because you want to, then you should quit." The argument was over. He never used that line again.

Of course, I wanted Gilder to row, just like I wanted my daughter, Sierra, to play soccer, and my son, Max, to play football. Sports changed my life and I hoped, they too, would benefit from their athletic pursuits. But I realized I could push only so far. I couldn't make them want what I wanted for them, even though all I wanted was the best for them. As it happened, my rower stayed with his sport through four years of college at a Division III program, and my soccer athlete earned a scholarship and played three years in a Division I program, making it to the NCAAs her junior year. My football player, however, quit before his senior year of high school.

Paul Sullivan's recent New York Times article should give parents who are deeply invested in their children's development as athletes some pause. In The Rising Costs of Youth Sports, in Money and Emotion, he writes about the increased financial investment parents are making, pointing out the steep odds they are betting on as they attempt to push their children to the top of the pyramid of their chosen sport by paying for private coaching, fancy camps, and participation on select teams. Bottom line: better to invest the dollars you are tempted to pour into your child's budding sports career into a college fund instead. The competition for athletic scholarships is simply too stiff to justify the investment many families are making today.

Sullivan also touches on the psychological impact on kids, thanks to untrained coaches who may know how to develop their athletes' sport-specific skills, but lack expertise when it comes to developing a child's mental approach or building confidence. No mention, though, of the pressure that parents put on their kids by putting sports front and center, perhaps without regard for what the kids themselves really want.

No matter your age, sports are supposed to be fun. Certainly that should be especially true in childhood. Most kids know that, and that's how it should be. Kids are experts at living in the present, so shouldn't we help them develop that capacity, and perhaps learn from them, not instill concern about the future, as adults are wont to do? How many of us wish for the ability to stay in the moment, to live "in the zone," knowing that life is sweetest when we are present?

That isn't all. Superior athletes don't necessarily blossom in high school, but may take a long time to emerge as stars. Ultimately, they have to rely on their own internal motivation to succeed, not their parents'.

Playing sports has become a means to an end instead of an end in and of itself. Part of a parent's responsibility is to position a child for success, yes. But that doesn't mean determining which field of play will best suit a child. That opportunity belongs to each individual. Each of us gets one chance to live the life of our choosing to discover the path that draws us forward and to make our own way. Despite all the love and hope we pour into them, our children are not our second chances.

Entrepreneur, Olympian, and author, 'Course Correction: A Story of Rowing and Resilience in the Wake of Title IX'