"Guess how much I love you?" I often ask my daughter before a good night kiss.

"All the way to the edge of the universe!" she might answer.

"No," I'd respond. "I love you all the way to the edge of the universe and back." We enjoy coming up with variations on the theme from the popular children's book.

I admit it's not the most original theme. Most parents profess boundless love for their children and often go to great lengths to express it.

Today's parents spend precious vacation days at hotels where tranquil views are overwhelmed by water slides. Many of us shave years from our lives from the stress of kindergarten applications, allowing ourselves to be herded like dazed cows in dress pants through private schools we have no business touring.

I've traded plain apples for pureed fruit in costly squeezable tubes despite the fact that both my daughters have a full set of teeth. On a bad day, I've even given a second glance to those premade peanut butter and jelly sandwiches in the frozen food aisle. And like so many parents with girls, I've succumbed to the Disney princess phase replete with cheap pink umbrellas and plastic sippy cups that will sit in a landfill for all eternity.

It seemed I would do anything to make my daughter happy, even betray some of my most fundamental values.

Of course my efforts to please my daughter didn't make her happy. They only made her appreciate me less. She soon became grouchy and oppositional with me. Nothing I suggested would fly. Not hair brushing or barrettes; not bubble bath or Band-aids. I faced an hour's worth of sulking every time I turned off the television. And bedtime became a knockdown, drag-out contest of wills. She was only four, but to me it felt as if she was going on fourteen.

Enforced timeouts felt Draconian to me, so I created a chart that outlined what seemed like reasonable behavior for a preschooler. We used stickers, stamps, tattoos, TV, tictacs, toys, and together time as rewards for good behavior.

All that hoop jumping eventually soured my daughter's intrinsic motivation. She began bargaining for rewards at every turn, even asking for prizes in exchange for putting on her coat or shoes.

When my patience ran out, I jumped on my high horse. I became stern and began the bad habit of correcting her all the time. Pick that up. Use a fork. Bring me your plate. Say excuse me. We both soon grew weary of my prim, schoolteacher tone. Our hours together felt tedious.

But there has never been a dearth of convenient ways to escape from our children's distress. Our culture has built entire industries around it. YouTube Videos. Teddy Grahams. iPhone apps. Juice boxes. Angelina Ballerina episodes. Pirate Booties. Hello Kitty stickers.

Deep down, I knew not all the goldfish crackers in the world would make my daughter feel whole, seen, and understood. These prefabricated breaks and treats were not renewing respites for my child. They were consumables designed to be dissatisfying in order to churn out more hungry, little consumers.

Our days had started to feel like wobbly Lego towers, with one block of instant gratification snapped onto the next. The main goal was to prevent the whole structure from toppling over before we reached bedtime.

I never doubted our love stretched all the way to the end of the universe. But what was the point of all that love if we couldn't manage to have fun together?

Barbara Fredrickson's new book Love 2.0, How Our Supreme Emotion Affects Everything We Think, Do, and Become, seeks to clarify fuzzy notions about the much-cherished feeling of love. The author has been researching positive emotions for decades. She defines love as a micro-moment of positivity resonance shared between people.

Love 2.0 helped me reframe my relationship with my daughter. The key to our success was to create more micro-moments of positivity. How would I do that in a way that made sense for a four-year-old?

A vision of the ABC Super Nanny interrupted this moment of high-mindedness. I remembered how the Super Nanny once gave the incorrigible children of her clients a flower made of tissue paper and pipe cleaners when they behaved themselves.

It was a lightbulb moment. I took a small glass vase and set it on my daughter's windowsill. At that moment, my daughter was engaged in a tug of war with her two-year-old sister over Bitty Baby from American Girl Place.

I took a bead from a jewelry-making kit and dropped it in the vase. The bead made a sharp clear sound when it hit the bottom. My daughter stopped yanking on the doll's legs.

"Because you are not afraid to show how you feel," I said.

She didn't let go of Bitty Baby, but her eyes met mine in a way I hadn't seen before.

That afternoon my daughter witnessed moments of tension melt into tenderness as bead after bead dropped into the vase. For knowing what you like and what you don't like. For having the strength to say no. For being determined. For having your own ideas about things. For being persistent. For eating only when you're hungry. For doing things your way.

The next morning at the breakfast table, I lifted the jar of beads and swirled them around.

"Why are you doing that?" she asked.

"I'm admiring all of your goodness," I said.

It felt amazing to see her smile. From that point on, everything changed between us. The beads help me put a positive spin on even the most difficult moments. When things begin spiraling in a negative direction, I find myself searching for ways to get a bead back in the vase. And sure enough, there is always a way.

My daughter doesn't always put her bowl in the dishwasher or brush her teeth when I ask her to, but home has become a place where we both want to be again. We bake banana bread. Tinker on the piano. Play Crazy Eights.

She might refuse to wear the dresses I choose for her, but she accepts the things that really matter. When I decided to cancel our cable television package, she took it in stride. She claimed television never made her feel good. Now she uses her free time to create oddball window decorations with scissors and paper plates and ribbons.

Even her obsession with Disney princesses has given way to deeper curiosities. We can spend hours pouring over books about human anatomy, the animal kingdom, and the universe. It has been nothing short of marvelous.

The flower vase still sits on her windowsill as a colorful representation of what is possible between two people. When the vase is full, we plan to throw a tea party to celebrate.

"We really don't need to wait until the vase is full," I told her.

"Because nothing will change your basic goodness," I said. "We can celebrate that any time you want." 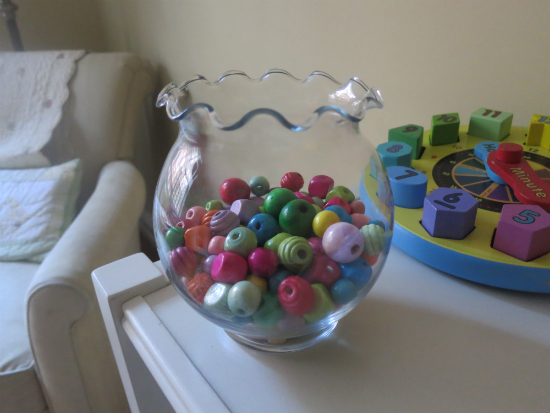 More:
ParentsBarbara FredricksonParenting Love
Newsletter Sign Up
Raise the kind of person you'd like to know
Subscribe to our parenting newsletter.
Successfully Subscribed!
Realness delivered to your inbox