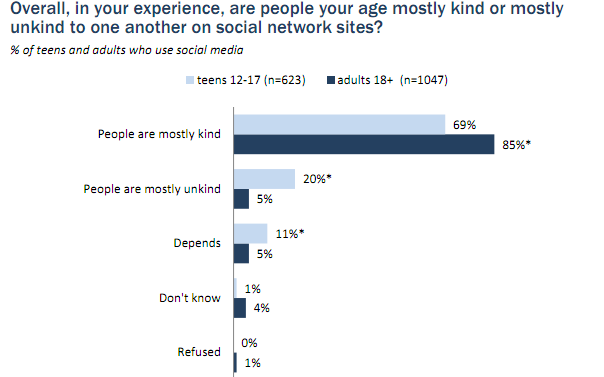 A just released study from the Pew Internet & American Life Project found that "69% of social media-using teens think that peers are mostly kind to each other on social network sites."

The study, which was unveiled Wednesday at the annual Family Online Safety Institute (FOSI) conference in Washington, was conducted by Pew in partnership with FOSI and Cable in the Classroom. The researchers interviewed 799 teens and their parents via cell phone and landline earlier this year.

Even some of the bad news isn't necessarily bad

In addition to the good news, there was what at first looks like a disturbing finding that "88% of teens have seen someone be mean or cruel to another person on a social networking site," but on reflection, I actually don't find that troubling.

Earlier this week I was in New Orleans for the International Bullying Prevention Association conference. As I walked down Bourbon Street in the famed French Quarter one evening, I saw a couple of overly inebriated people yelling at each other in a mean way. They weren't being mean to me, I wasn't being mean to anyone and the vast majority of people around us (including many who were equally inebriated) weren't at all mean. Overall, it was a jovial and friendly crowd. Still, if a researcher asked me if I witnessed meanness, I'd have to say yes.

In an interview, the study's lead researcher, Amanda Lenhart, said, "What we're finding is that social media is a lot like the real world. We see people being mean and cruel to other people all the time. Sometimes we intervene, sometimes we don't. Sometimes it relates to us and sometimes it doesn't." She added, "the truth of it is when you drill down, teens don't actually see that type of behavior frequently, which is why we have the sense that the overall climate is positive."

Still, there are some kids who are deeply hurt by bullying and some kids can be extremely mean on and offline, so it remains a very serious problem for a minority of youth.

Lenhart also pointed out that "parents matter." The survey found that 86% get advice about how to be safe and responsible online from their parents. "Parents are an extremely important source about social responsibility online and on their cell phone." The study found that 58% of teens said that their parents had the most impact on them about ethical online behavior. "Parents really are quite important."

You can read a lot more about the study on my CNET News blog.