The lists were compiled by OnlineFamily.Norton, a service provided by Symantec that helps parents monitor kids' activities online. It examined how the most popular search terms varied by gender, as well as by age.

Here are the top search terms of the year, by age group: 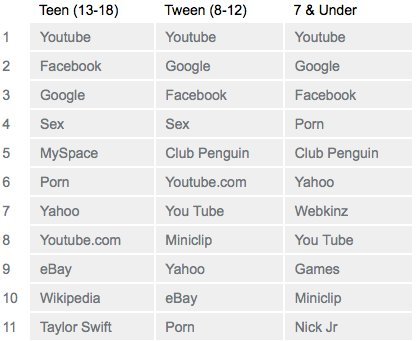 The reports includes a list of the 100 most popular search terms among all teens and kids under 18. See the top 20 queries below:

The most popular search terms, by gender, were as follows: 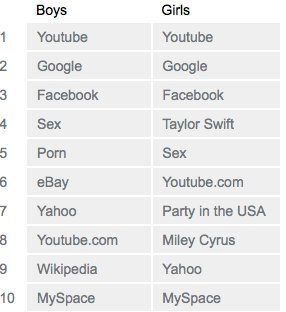 According to OnlineFamily.Norton, 13 percent of boys searched adult topics, whereas only 2 percent of girls did the same.

To compile its top 100 list, Symantec tracked 14.6 million searches run by users of its OnlineFamily.Norton service and ranked the terms according to ones submitted most frequently to those submitted the least. The terms were collected anonymously, so none could be associated with any specific children or families.