Countless hours and endless parenting articles have devoted themselves to this daunting question: How do you get kids to eat their vegetables?

The idea comes courtesy of Cornell’s David Just and Brigham Young’s Joseph Price, who ran a series of experiments in which they offered different groups of school children different types of incentives -- quarters, nickels, raffle tickets, etc. -- to scarf down celery and the like.

They found that children were significantly more likely to eat fruits and veggies if they were given a clear incentive.

From the researchers (emphasis and unnecessary exclamation marks ours):

We find that providing a reward increases the fraction of children eating a serving of fruits or vegetables by 28 percentage points (an 80 percent increase), and this increase occurs even on those days in which only vegetables (!!!) are being offered.

They even broke out the increasing likelihood of vegetable-eating by type of prize: 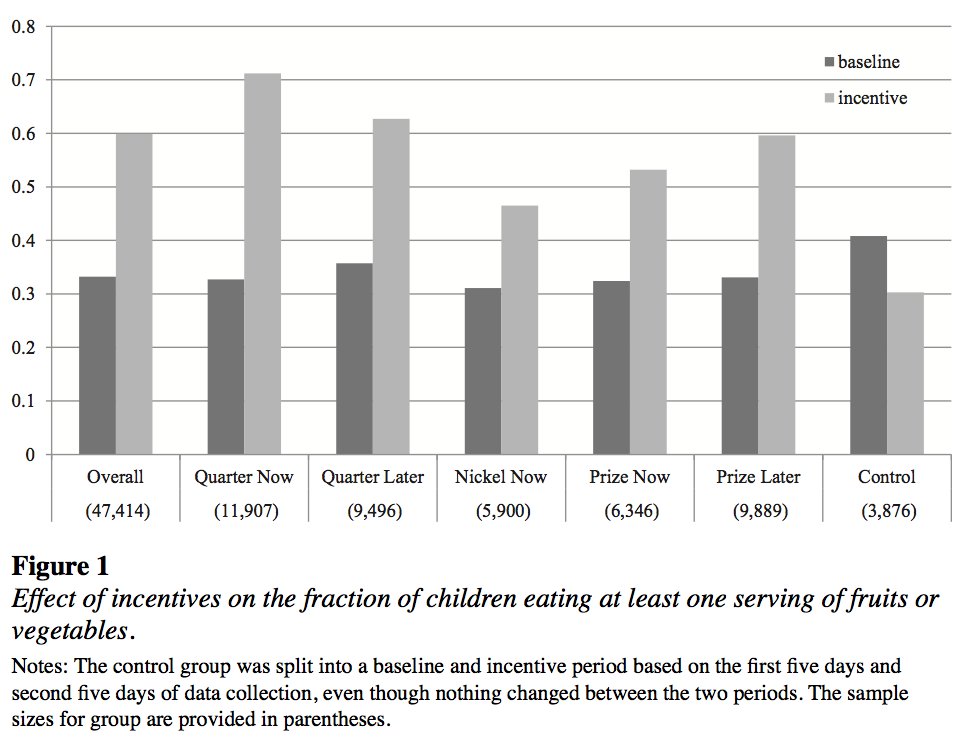 Do you see that? For as little as a nickel, kids munch their freakin’ hearts out. Wait, it gets better: The tactic was more than twice as effective at low-income schools -- where lack of veggie-munching is a big problem -- than it was at high-income schools.

In a phone interview with The Huffington Post, Brigham Young's Price said he and his co-researcher wanted to find a way to convince low-income students with poor diets of the value of proper nutrition.

While not all children have access to fruits and vegetables at home, he said, almost all could have access at school.

Price added that this need not cost struggling schools a prohibitive amount of money. “If I’m a principal, I have lots of extra rewards available to me, an extra recess, [for example],” he said. “A similar argument could be made for paying kids to read books.”

On the whole, Price expressed excitement at the prospect of using incentives to improve child behavior. He is currently working on a follow-up study to see if these incentives cause children to develop habits in the long term.

“Incentives work very well for activities that allow kids to acquire a taste or develop a skill,” Price told The Huffington Post in a phone interview. “I think there’s clear evidence that if a kid tries something a couple times they’ll develop a taste for it.”

The experiment has some similarities to one performed a couple year back by a team of researchers including Freakonomics' Steven Levitt. Back then children were offered money if they performed well on a test.

(One final note: This veggie study used school-provided lunches, rather than sack lunches. Parents might want to do their own field work on this one.)