Contrary to popular belief, when it comes to vitamins and minerals, less is more.

A new report published by the Environmental Working Group (EWG) shows that children are overexposed to vitamins and minerals thanks to fortified, processed foods like cereals and snack bars, as well as vitamin supplements.

The culprit? The Food and Drug Administration's outdated "Daily Values" recommendations for nutrients, which are calculated to estimate an adult's needs, yet are still used on children's products, according to the EWG. Another problem: the fact that these recommended daily values date back to 1968, and are in sore need of an update.

"The current nutrition labeling system is in dire need of reform," the report said. The EWG recommends that the FDA reset its recommended daily values according to the latest scientific studies, break out daily value levels for 1 to 3 year olds and 4 to 8 year olds, and regulate companies that use the fortification levels for marketing purposes.

While vitamins are essential for maintaining health, too many of them can be toxic for the body. Studies have shown that too much vitamin A can lead to liver damage and hair loss. Too much zinc can weaken the immune system, and too much niacin can cause rashes, nausea and vomiting.

At the same time, save a few instances where a company accidentally over-fortified a product beyond its intended levels, there actually is almost no evidence of harm that has been directly linked to fortified foods.

"It is difficult or impossible to link these nutrient overexposures to specific cases of harm to children's health, but multiple studies point out that cumulative exposures from fortified foods and supplements could put children at risk for potential adverse effects," reads the report. The EWG estimates that millions of children are at risk for overexposure to the vitamins A and B3 (niacin) and the mineral zinc. And for children who take supplements, the risks are even higher. According to the EWG's calculations, more than 10 million American children are overexposed to vitamin A, up to 17.2 million are overexposed to zinc and about 4.7 million are overexposed to niacin. 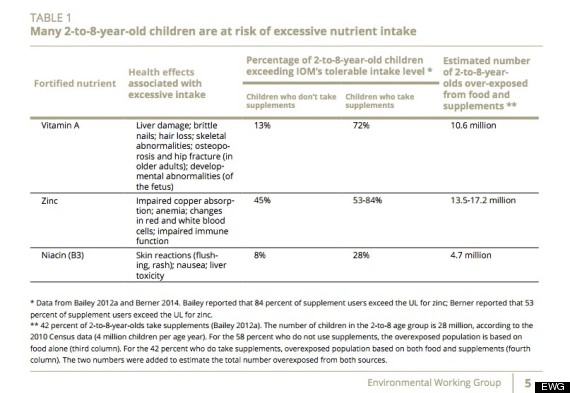 Vitamins' potentially toxic effects are most likely the result of overdosing on vitamin supplements, not processed, fortified foods, said Marion Nestle, a nutrition and public health professor at New York University and author of Food Politics: How the Food Industry Influences Nutrition and Health.

"The EWG report demonstrates quite clearly that it isn't difficult for kids to take in vitamins that are above the upper limit of recommended intake levels," Nestle told HuffPost. "But there's very, very little evidence that people are harmed by the amount of vitamins that they get in food."

"I can only think of one real food that ever caused problems: polar bear liver, which is very high in vitamin A and caused toxicity in Arctic explorers who ate polar bear liver," Nestle continued. "In other words, hardly a problem for most Americans."

Nestle was not involved in the study, although the study does quote her work on how processed food companies are using nutrient claims to market their products ("vitamins are about marketing, not health"). Yet despite the lack of evidence of direct harm caused by fortified foods, she does agree with the EWG report's FDA policy recommendation -- even if it's not for the potential harm to children, but rather the utter waste of time and money that goes into making and buying fortified foods and vitamin supplements.

"There's very little evidence of clinically significant vitamin deficiency among people in the U.S. except in those people who are sick or have really weird diets," Nestle said. "There's not much evidence that fortifying foods makes people healthier."

"So you have a situation in which what you're doing has little or no benefit, and it might potentially be harmful but it's difficult to study it," she added. "Why would you want to put children at risk?"

In a statement emailed to HuffPost, the FDA defended its fortification and labeling policies, writing that it wasn't aware of any evidence that shows overexposure to vitamins is due to FDA regulations. The FDA also pointed out that the EWG's data shows that it is the children who eat fortified foods and take vitamin supplements who seem to be most at risk of overexposure.

However, the FDA did note that it has already proposed many new regulations similar to the ones suggested by EWG. Last March, the FDA proposed making serving sizes more realistic, and breaking out recommended daily values for very young children. The administration is now taking public comment about the policies on its site. From the FDA's emailed statement:

The FDA is currently accepting public comments on its proposed revision to the Nutrition Facts Label, which includes updates to many of the servings sizes based on current research on how much people actually eat of a food in one sitting. Additionally, the FDA proposed Daily Values for infants (7-12 months) and young children (1-3 years), based on Dietary Reference Intakes established by the Institute of Medicine for these age groups.

The changes are a "good start," but need to go further, the EWG report said. For instance, there need to be separate daily value levels for children ages 4 to 8 instead of continuing to lump them in with adults. And the change in serving sizes does not reflect cereal, the EWG pointed out. Perhaps getting to the root of the issue, the EWG also recommended that the FDA severely curtail companies' use of vitamins as a marketing tool.

For now, the EWG has two simple recommendations. Parents should exercise caution when serving their children food that has more than 20 to 25 percent of the adult daily values of vitamin A, zinc or niacin. They should also take time to educate themselves about the different types of vitamin A; No one is in danger of overdosing on vitamin A from foods like carrots or pumpkins. But preformed vitamin A, which comes from meat, fish and dairy, can appear on a fortified food label as retinyl palmitate, retinyl acetate, vitamin A palmitate or retinol and does carry a risk of overexposure.

"They should eat food, and highly processed foods are not recommended under any circumstances," Nestle said. "Most fortifying vitamins are only added to processed foods, which are foods high in sugar, salt and fat. If people are eating healthy diets and real foods, they are probably getting enough vitamins."