KIEV, Oct 14 (Reuters) - A few thousand protesters clashed with police on Tuesday outside the Ukrainian parliament, throwing stones and smoke bombs and firing with air guns through the building's windows.

A Reuters photographer said the protesters, many of whom were masked and armed with batons or metal chains, massed outside the main entrance of the building and began bombarding it with projectiles.

Parliamentary deputies, who had just passed anti-corruption laws and voted in a new defense minister in what was the last day of the current parliament before an election on Oct. 26, went into recess because of the disorder outside.

It was not immediately clear what the demands of the protesters were. Several of them declined to say what political forces they represented.

"This is a provocative action directed on destabilization of the situation in Ukraine," said Zoryan Shkiryak, aid for Ukrainian interior minister.

Most windows on the first floor were broken or shot out by air guns, the photographer said. Police said they had detained 36 protesters.

Earlier on Tuesday the nationalist Svoboda party held a meeting near parliament urging deputies to give special status to a World War Two nationalist force called the Ukrainian Insurgent Army (UPA) which fought both the Nazi occupation and later Soviet forces.

But Svoboda said its members had no link with the protesters. The far-right nationalist group Right Sector also said its people had not taken part.

In eastern Ukraine, seven Ukrainian servicemen were killed in the past 24 hours despite a ceasefire between government and separatist forces - six of them killed in two landmine explosions, a military spokesman said.

The mines were laid by the pro-Russian separatists in an area bordering territory controlled by rebels seeking independence from Kiev.

Ukrainian President Petro Poroshenko ordered ceasefire on Sept. 5 but the agreement has been regularly violated and the military says about 50 servicemen have been killed.

About 3,660 people have been killed in the six-month conflict in the east, according to United Nations figures. 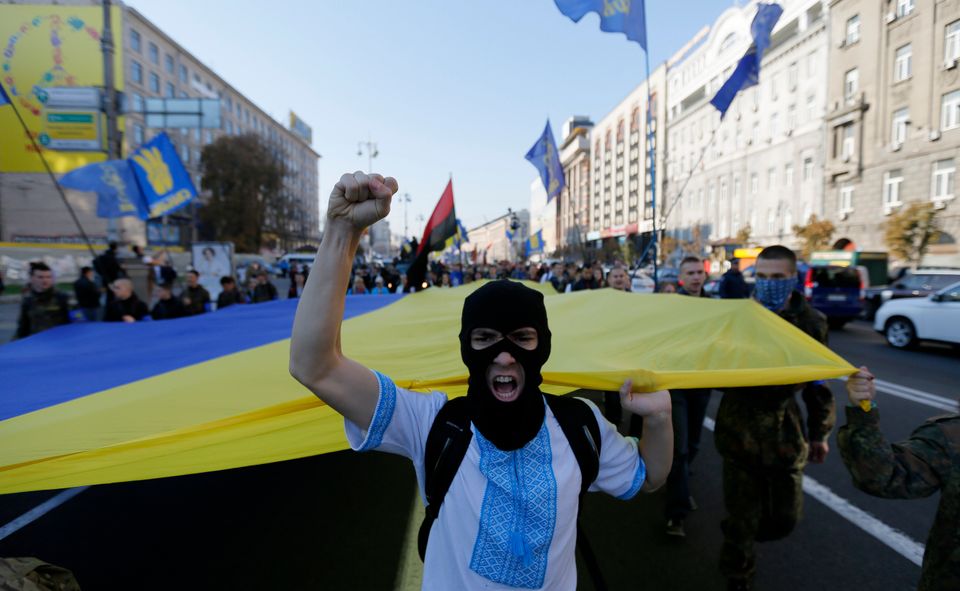