Ever wondered what happens when something falls into a lake of molten lava? (Besides becoming Darth Vader, of course.)

The video above, shot from the rim of Halemaumau crater on Hawaii Island, will clear things up. At around 1:15 a.m. (local time) Sunday morning, part of the crater wall fell into the lake of lava below, creating a fiery explosion of spatter. This type of explosion is an unpredictable, atypical event according to volcanologist Frank Trusdell.

"The walls of the crater become destabilized by heating, weathering, earthquakes and loss of support. They fall into the lava causing degassing of the lava. The exsolution of gases happens rapidly leading to the explosion," Trusdell told The Huffington Post.

We're just glad to be watching from the safety of our computer screens.

Halemaumau crater, which is about 3,000 feet across, is part of the Big Island's youngest volcano, Kilauea, which makes up the southeastern tip of the island. Kilauea has been continuously erupting since 1983, and a lava flow that started advancing in June is currently causing quite a stir as it inches dangerously close to the rural Pahoa Village. 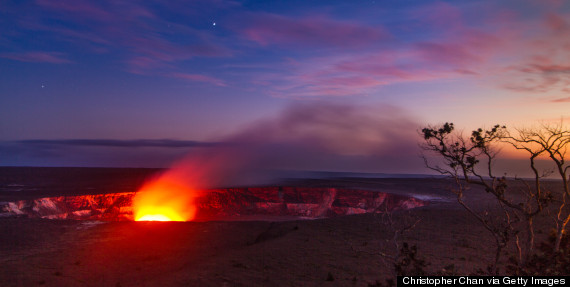 Lava, truly a sight to behold, has fascinated observers for centuries. Here's what Mark Twain had to say about it:

At unequal distances all around the shores of the lake were nearly white-hot chimneys or hollow drums of lava, four or five feet high, and up through them were bursting gorgeous sprays of lava-gouts and gem spangles, some white, some red and some golden -- a ceaseless bombardment, and one that fascinated the eye with its unapproachable splendor.

Couldn't have put it better ourselves.